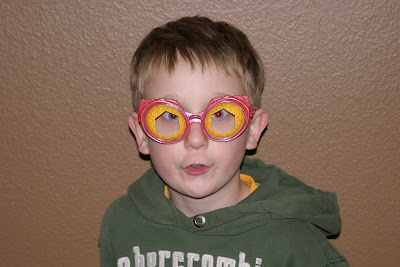 This is our little turkey.

And we’re very much thankful to have him. He’s a great kid.

We have waddled all over the place today, from one feast to the other. It started last night, technically, with a dinner at our house that would have done Martha Stewart proud. (And that’s saying something, because I’m not so sure that Martha would smile with pleasure over the frozen fish sticks that I’m usually quite good at cooking.)

This morning, we zipped out to my sister’s house for breakfast, and the kids put on a spontaneous play, which made me smile with genuine happiness. They’d constructed a teepee by draping blankets over a tripod for a camera, and this served as their backdrop. My niece played the part of Mary, my nephew was Joseph, our friend’s daughter was baby Jesus, and the boy pounded the keyboard, as he provided the musical score. Mary and Joseph had baby Jesus in a makeshift manger, in front of the teepee, and four-year-old Joseph kept saying, over and over, “Oh, Mary, we have a good baby.” And Mary stuck to the script and read about how King Herod wanted to kill their baby, so she and Joseph took him into Egypt. The trip to Egypt involved walking up the stairs and back, with a lot of dramatic sighs, as they emphasized how long and tiresome the journey was. When they returned, my niece announced to the crowd gathered in the living room, “Everyone, we are now in Egypt.” And Joseph said — again! — “Oh, Mary, we have a good baby.” And while they were in Egypt, Mary and Joseph met a nice Indian, and they had a feast with him, and they gave thanks. And, in case no one had heard his line previously, little K shouted out again, “Oh, Mary! We have SUCH a good baby!” And, in the background, the boy smacked some keyboard keys for the climactic ending of the musical score.

Naturally, we all clapped and whistled. Opening morning of the play, entitled “When Mary and Joseph Met an Indian on Thanksgiving Day,” went very well indeed. We expect to hear great reviews about it.

And the musical score! Mercy! It was brilliant.

Truly, I haven’t smiled as much at a play as I did over this impromptu, six-minute one in my sister’s living room.

Afterwards, Hubs and the boy and I ventured out to Hubs’ parents’ house, where we met up with his brothers and their families.

We, of course, ate again.

All in all, it was a very blessed Thanksgiving day.