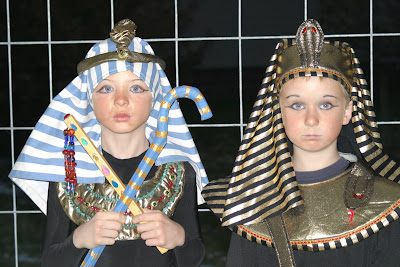 There’s a new monarchy in town.

May I introduce you to the Tut Brothers? They’re not smiling, because their teeth were rotted out with Kit Kats, Hershey’s miniatures, and Pixy Stix. That, and the fact that they both assured me that King Tut NEVER smiled. 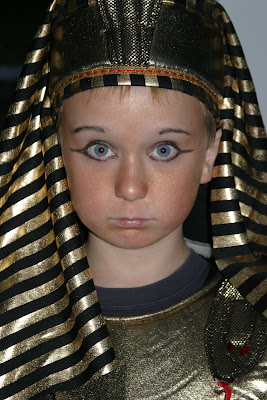 Our Halloween panned out to be the very busiest Halloween on record, because we seriously love to see exactly how many events we can cram into one day. It’s how we roll around here, people. I needed a personal day planner and a beeping timer to keep track of where I was supposed to be and when.

At 2:00 on Saturday, the boy went with his good buddy, Carter, to a local haunted house. Carter’s mom picked the boy up, and off they went. (The report on the haunted house was simply this: “Mom, one part scared me to death, and Carter and I both jumped, but we didn’t scream, because screaming is what girls do, and boys never scream, so we didn’t, but it WAS scary, but, Mom, it was a blast, too! I loved it!” Clearly, Haunted House Hosts, you did your jobs. You scared the boys, you ALMOST succeeded in making them scream like girls, and they had a terrific time.)

At 3:00 on Saturday, one of the kids from the boys’ class was throwing a Halloween party at her house, and the entire class was invited. I was supposed to pick up G, and take her to the party. At 2:55, my cell phone rang. It was Carter’s mom, saying that she was on her way to our house. I simply said, “Great. Can you grab G on your way? Because, like, I was supposed to do that, but since you’re out, I could call G’s mama and tell her that YOU’LL get G.” It was a go. Carter’s mom collected G, added her to the backseat of her SUV, and dropped all three punks off at the party.

At 4:00, it was my job to pick up the boy, Carter and G, as well as Kellen (King Tut #2) from the party, and take them to the next phase of Halloween ’09. I arrived at the party to find a pack of wild children, hopped up on sugary treats and the prospect of trick-or-treating in a couple of hours, running circles around the yard. Literally. Everyone was chasing everyone else, and it was one of those moments where you could clearly see that the on-duty, party-throwing mama had lost control some time ago, and had simply given up, encouraging everyone to just! go! outside! and run off some of that energy! You had to give her credit, though, for hosting the party, because, oh my lands! The kids had fun. They were overjoyed with the fun that they’d had at the party.

So, with four children in the back of my Suburban, we headed off to a local church in town, which was sponsoring their annual Fall Festival. They had numerous inflatable attractions, and the gang was gung-ho to get started. 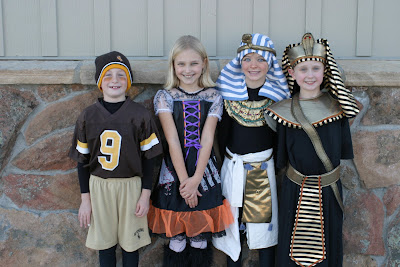 I forced them to stand beside the church’s wall, so that I could document this moment of their lives forever on Kodak paper. Little G was well escorted on Halloween night, as she had the monrachy there, as well as the local running back. There wasn’t a ghoul in existence who would have braved those three to mess with G. And, although they would have all gone to battle for her protection without batting an eyeball heavy with royal make-up, not one of them would be willing to fetch her a glass of punch at the festival. They had their limits. Putting someone in a choke hold and smacking them down with their Egyptian snake staffs was one thing; taking time out from the gigantic inflatable slide to bring the poor lady a drink before she swooned from heat exhaustion was another matter entirely, which simply never crossed their minds. Clearly, we’ll have to work on this!

At 5:30, Kellen’s parents picked him up from the Fall Festival, so there was a mad scramble to find his shoes and his snake staff. (Royal staffs adorned with cobra heads became too much to keep track of when the inflatable obstacle course beckoned them.)

By 6:00, the remaining crew had burned off all the sugar that they had consumed at the 3:00 party, so we headed to Burger King, where anyone in a costume received a free hamburger. Hubs refused to eat at Burger King, but he did partake of their Coke. Although Hubs cannot stomach a flame-broiled Whopper, he will adopt any unattended Coke on Planet Earth and love it with wild abandon.

By 6:30, the hamburgers had been gobbled down and only one of the three children had laughed so hard, he’d had chocolate milk squirt out of his nose. (Notice I used the male pronoun here. G is entirely too ladylike to blow chocolate milk straight out of her nose and onto the table. She’s inclined to think that it can ruin a person’s appetite. She was also inclined to think that it was downright gross, while the boy and Carter laughed themselves plum off of their chairs when it happened. G did not laugh herself plum off of her chair. She wrinkled up her nose at the boys, and actually had the audacity to FROWN at them and their antics. Girls are so weird in how they view things! It was only chocolate milk and boogars, after all.)

At 6:45, we were back at Carter’s house, where we parked the Suburban, and joined his mom and G’s parents, and began strolling the neighborhood, on a fantastic evening, where the temperature was almost tropical. (And calling an October evening tropical in our neck of the woods is saying something, as we’re completely landlocked here and more inclined towards weather resembling that on a frozen tundra than an island.)

The parents managed to stroll in the middle of the streets for the entire night, while the excited kids raced, in a zig-zag pattern, back and forth, from house to house. Truly, it was a ton of fun, which sounds like an over used cliche, but I have no other words for it. We had a fantastic evening, and King Tut quickly learned what all women have known their entire lives.

Running in a dress (“It’s not a dress! It’s a tunic! It was the height of fashion 3,000 years ago!”) is pretty dang hard to do, as you cannot manage a full stride. Hubs kept giggling, and he and G’s daddy would shout out, “Hike it up! Hold it like Laura Ingalls used to do!”

King Tut came very close to calling for their heads.

But really? The boy ended up laughing it off, and he’s officially decided that running in a TUNIC could become an Olympic sport.

And, at the end of the night, King Tut and the running back had enough candy to scare a dentist worse than any ancient Egyptian curse could have done, which is how we measure Halloween success in these parts. By the candy! 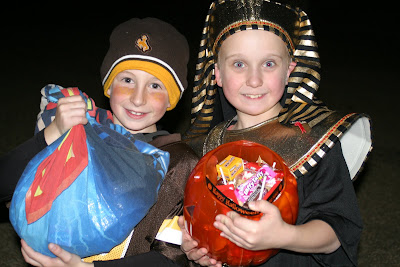