What can you do on a chilly winter day, over Christmas break, when you’re generating too much noise in the house and your mama is a PE teacher?

Well, you can call a few friends and say, “What are you doing in an hour?” And because Mama has the keys to the school and the PE supply closet, you can have a rocking good time.

This is the herd that we managed to gather on an incredibly short notice this afternoon to attend our spontaneous Gym Party. 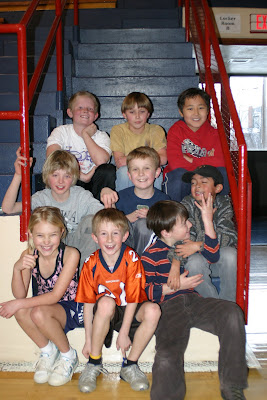 I made them sit on the steps to the bleachers, and I snapped exactly nine photographs while they were sitting there. Kodak moments cannot be passed by. Those, my friends, are words to live by.

(In every single picture, someone different is distracted from looking at the camera. In this case, I give you E and P. Who knows what the two of them were doing here? In the other eight pictures, they were looking straight into my camera lens and giving me angelic smiles, and someone ELSE was flapping an arm or a leg all over the place.)

And this, people, is how we spent the greatest part of an hour (as demonstrated by the boy and his cousin, W) — pretending to ride horse-drawn chariots, until everyone’s faces were the color of fire, and sweat was running in rivulets down noses and cheeks, and they all gasped for water and announced that they were so tired, they were actually near death. When you attain the age of thirty-something, sitting on a scooter and having someone pull you with a jump rope until your legs burn like a raging inferno and you have to crawl across the floor to your water bottle no longer sounds like a ton of fun, but the ten kiddos in the gym this afternoon thought that traveling across a gymnasium floor in this manner was almost as fun as being at Disney World. 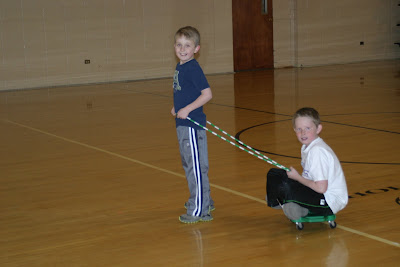 And the only injury sustained was to the boy. He and P collided while running, and the boy introduced his forehead to the gym floor in a quick kiss of pain. As a result, he’s sporting a goose egg now the size of a standard golf ball, and the gym floor burned some of his skin off, but his pupils didn’t dilate strangely. Whew.
Hubs told him that chicks dig scars.
I’m not sure he cared about that, but I’m betting that all ten of those kiddos (even the one whose mama picked him up before I snapped the picture of the remaining nine on the steps) will sleep like rocks tonight.
And to the other mamas, I simply say this: You’re welcome! I have worn them out for you.