We’ve had a long Christmas weekend, filled with a whirlwind of activity. We’ve eaten enough food to sustain a small army. And when I say “sustain a small army,” I mean sustain them for a string of days that is equal to two weeks. We have shredded wrapping paper off of gifts, giving absolutely no thoughts to recycling it and using it to wrap another gift later. Our basic method of operation was simply to destroy it, as quickly as we could, until it looked like it had been pushed through a shredder and gnawed on by a raccoon. That’s simply how we roll around here. We have laughed. We have hugged. We have hopped up and down with excitement over our gifts. We have driven in blizzard-like conditions. We have stomped around in the snow. We have gone to a candlelight service at church, where one of us swung our ponytail around until it landed in the boy’s candle. That one of us is six years old, and I am happy to report that not a single strand of hair ignited in flames to disrupt the beautiful service, and for that, we say, “Hallelujah!” (Clearly, there are advantages to being six years old and not needing the holding power of a good hairspray. Had my own hair been the one to have a close encounter with a candle held by a nine-year-old boy, it would have gone up in flames and been a raging inferno, what with all the aerosol spray involved.)

We have also made reindeer food, which we enthusiastically mixed and mixed and mixed. Making reindeer food is a holiday tradition, and the recipe involves anything edible that is found in the pantry. Quaker oatmeal always makes a good base for the reindeer food, but we’ve learned over the years that reindeer also like salt, tapioca, nutmeg, chili powder, dried chives, and bread crumbs, as their tastes are not as refined as the local herd of deer who only eat the flowers and shrubs from my front yard. When the reindeer food has been stirred for approximately forty-five minutes, and when the salt shaker is empty, it is time to don our coats, run outside in the frigid Christmas Eve temperatures, and sprinkle it all over the driveway, so that the reindeer will smell it for miles away and be lured in with the promise of a tasty treat. 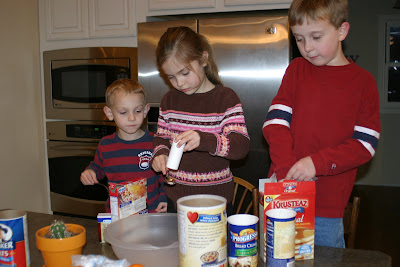 We also got to hang out with some really cute kids. May I submit the next two photographs as Exhibit A and Exhibit B? 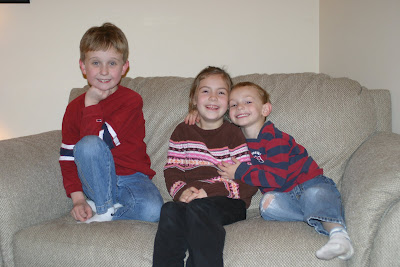 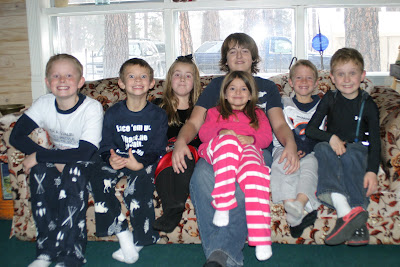 The boy has eight cousins — two on my side of the family, and six on Hubs’ side of the family. I know that I’m a little partial, but I think they’re the cutest nine kiddos (the boy included) that I know of. (Please see that all ponytails are in tact, as none of them actually caught fire at the Christmas Eve candlelight service. Whew!)
The boy also received the Lego Death Star from Hubs’ parents as a gift. The boy has begged for this particular Lego set for two full years now, and his mama and daddy have shot him down for those same two full years, because entirely too many clams needed to exchange hands in order for us to secure a Death Star for ourselves. However, grandparents often give no rational thought to such things, and the look on the boy’s face when he destroyed the wrapping paper off of this gift was priceless. He spent the entire afternoon sitting in a chair, holding the box on his lap. And that, people, is saying something, because I think the boxed set weighed more than the boy does at the moment. This particular Lego set has 3,803 pieces. I’m not sure if you actually know what 3,803 pieces actually looks like on a bedroom floor, so I would like to submit the next two photographs as Exhibit C and Exhibit D. 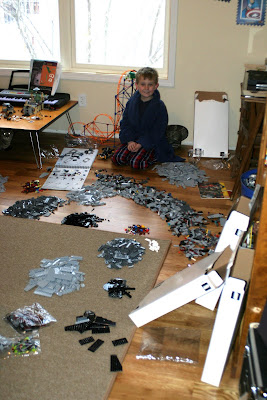 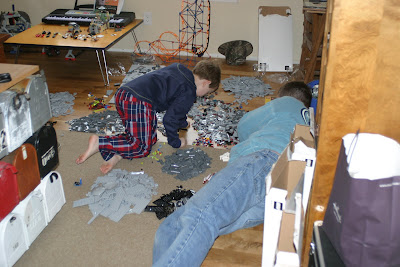 3,803 plastic pieces can pretty much cover a bedroom floor. The boy, clearly, is thrilled to have such a mess spread from one end of his room to the other. He and Hubs spent a couple of hours separating the pieces into organized piles, based on color. Gray pieces went in one pile. White pieces went in another pile. This way, searching for a lone piece was not such a daunting task for the boy.
The boy’s other favorite gifts were a bathrobe and a CamelBak hydration backpack (the kind with a plastic bladder inside for water). He announced that his bathrobe is so cozy and warm, he’s going to start wearing it to school in place of his heavy coat. Apparently he’s going to go for the Hugh Hefner look. He also slept in his new bathrobe last night, and he wore it to church this morning. Of course, my Type A personality took over once we secured a spot in the parking lot for our Suburban, and I told him that all bathrobes must be left in the vehicle for the duration of the service. He was not happy with me, but I assured him that even Hugh Hefner probably left his bathrobe in the car when he went to Sunday School.
We discovered that having a CamelBak water hose strapped on your back is actually a good thing, especially when you are participating in marathon Lego building sessions involving 3,803 pieces. It minimizes the amount of trips that you make out of your bedroom in order to secure a glass of water from the kitchen to stay hydrated. However, on the flip side of that, it absolutely maximizes the amount of trips that you make to the little boys’ room. For every action, there is an equal reaction. Or something like that. I didn’t really pay attention in my physics class, as I think the teacher lost me at, “Welcome to Physics I, students.”
At any rate, our Christmas was wonderful, and I’ve learned that you should never take wonderful for granted. My nieces and nephews were absolutely precious, and so much fun to be with, as they enjoyed Christmas at maximum voltage. Our brothers and sisters were a total kick in the pants (except for the one who told me, “You know, you’re getting old enough now that you might want to try that Estee Lauder Wrinkle Serum.”). Our parents are terrific. We feel blessed to have each and every one of them around us.
And now? Well, the Christmas tree is down. The ornaments and the decorations are boxed up and put away until next December. I know, I know. People assure me that I have some sort of defective Scrooge gene in my genetic makeup, but it is what it is. I yank the holiday decor down on December 26th, year after year after year, no matter how loudly my friend Amy yells at me that I am ruining the Advent Season by UNdecorating so early.
So, with the house cleaned up and totally free of pine needles now (believe me! We had enough pine needles on our floor to fill a kitchen garbage bag, as our tree decided to completely quit drinking in water.), we’re looking forward to a great new year!