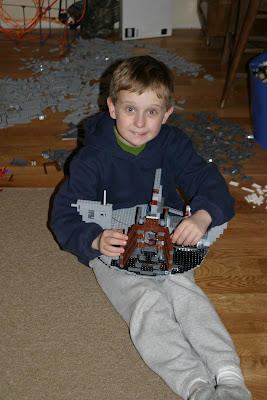 It’s a little thing that we like to refer to as progress. Instead of having 3,803 Lego pieces on his bedroom floor (all sorted and arranged by color), I think we might be down to 3,403 pieces scattered hither and yon now.

Of course, it would actually help the construction process if the boy would stay home over his Christmas break, and not dash off to spend the night with his buddy, Carter, and his grandparents. And, if he’d stay inside the house and build, instead of running outside to frolic in the snow with the cute neighbor boy’s new Christmas puppy (who sports the name Vader, which thrilled the boy to no end — just thrilled him, I say), he might actually have that bedroom floor completely cleaned up by now.

But Christmas break is for fun and frolicking and friends, so I’ve encouraged the boy to just! take! a break! from all the building, and go play. He kept complaining that his back was aching, from bending over the pieces during his marathon building sessions. I’m not sure if the Death Star policies provide for Workman’s Comp or not. In fact, I’m afraid that Darth Vader might just plug someone with a laser blaster if he insisted that he’d hurt his back while working in the back quadrant.

Either that, or he’d have the complainer thrown into the trash compactor, where the walls close in on you, and Han Solo probably won’t be around to stage a friendly rescue.

The trash compactor, by the way, has been built. The boy is ever-so-very-much proud of it, and he has demonstrated for me nine times tonight how the walls move inward. What will Lego think of next?

At any rate, I do hold out hopes that I will, once again, be able to vacuum the boy’s bedroom floor, without hearing the death rattle of a Lego piece that has been sucked into the vacuum cleaner and met its end. Someday soon, the vacuum cleaner will reacquaint itself with the boy’s floor. I can feel it. There’s a light at the end of the tunnel.