We rang in the new year at our house with an incredible amount of enthusiasm: I went to bed at 9:30 on New Year’s Eve, and Hubs and the boy stayed up until 10:30, watching some show on TV about a world traveler who will literally eat anything, in any country.

It was about all the excitement we could take around here.

On New Year’s Day, Hubs and I gave in and laid on the grenade — we simply had to go to Wal-Mart, because we were out of everything. And when I say everything, I mean not only were we out of Pop Tarts and ketchup, but we were out of laundry detergent, toothpaste, deodorant, paper towels, and Clorox bleach. Clearly, these are the essentials that keep our lives running smoothly. In fact, Hubs and I ended up pushing not one, but two (count ’em! One! Two!) carts around the grand super center, which we have never done in all of our years. Never-ever have we been the two-cart family. We also quickly realized that two-cart families spend significantly MORE than one-cart families do.

While we were off gallivanting at Wal-Mart, buying essentials, we dropped the boy off at a New Year’s Day party at some friends’ house. They were ringing in twenty-ten by playing a competitive game of broom ball on their frozen pond, and the boy was convinced that this would be a whole lot more fun than hanging out with his parents for hours on end and filling two shopping carts with dry goods. Neither Hubs nor I could blame him. We were more interested in attending the festivities as well, but Old Mother Hubbard had some chores to attend to first.

And then, when we got home from the massive shopping spree and began unloading all the loot (which is sometimes as daunting as actually shopping for it), I realized that I could no longer tolerate the pantry. It was packed with every manner of messiness, and the boy, as is his custom, had emptied two boxes of Ritz crackers and a box of Fruity Pebbles, and hadn’t actually bothered to throw the empty boxes into the garbage can. Instead, their dead and empty box bodies were still stuffed in between the flour and the cooking spray and the canned soup, and there was really no rhyme or reason or organization to the chaos on the shelves.

And what with it being New Year’s Day and all, when people clean! and purge! and organize! and walk on the treadmill more!, I decided to gut the pantry and scrub it clean, which clearly meant that broom ball was taking a back seat to my Type A personality and the need to have all of my soup labels pointing in the same direction. (It should be noted here that Hubs never felt any whisperings to his soul that he should clean the pantry instead of playing broom ball. Hubs was perfectly content to gaze upon empty snack cracker boxes stuffed sideways into the pantry’s shelves. He knew he’d still sleep soundly knowing that vacuous boxes existed within our pantry.) It took a little bit of time, but, in the end, the pantry shone like a little star on its first birthday.

Eventually, we scooped up the boy from Broom Ball ’10 and ventured over to some friends’ house for dinner on Friday, because Cody was cooking a standing rib roast. Since I have cooked a standing rib roast exactly never times, we were quite enthused to attend the impromptu dinner party, and Cody didn’t let us down.

Cody can cook. And, people, when I say the girl can cook, I mean she should have her own syndicated show on the Food Network, right there with Paula Deen, where they never cook Cheerios for dinner, but instead try things like standing rib roasts and grilled meats with fancy sauces.

On Saturday morning, as I began pulling odds and ends out of the refrigerator to assemble breakfast for Hubs and the boy, I realized that I could no longer tolerate the fridge and its contents either. What with the pantry being a sight that could have been featured on an episode of Cooking with Cody and Paula Deen, I felt that the fridge lacked something. And by something, I mean that it lacked cleanliness.

I had stray celery leaves and bits of papery onion skin in the crisper. I had (eww!) drops of dried redness in the meat drawer. We had three mustard bottles in the fridge’s door, not to mention another brand-spanking new bottle of French’s Classic Mustard on a shelf in the pantry. (Hubs, you see, is quite passionate about French’s bright yellow mustard. He eats it on everything, from sandwiches to pot roast to slices of pepperoni pizza. Hubs cannot stand to run out of mustard, and he’s always afraid that he’ll eventually face a monumental crisis in which he DOES run out of mustard, which would be as great a catastrophe to him as it would be if the free world ran out of oil, so Hubs somehow manages to sneak a bottle of French’s into the cart every time we shop for groceries, whether we need it or not. After combining the contents of three mustard bottles into one mustard bottle on Saturday, and reassuring Hubs that there was yet another unopened bottle of mustard in the pantry, I forbid him from touching another bottle of French’s in the grocery store, UNTIL FURTHER NOTICE. He didn’t take the news well, and stated, “I’d really hate to run out.”)

Because of the fridge’s unsightly condition, I wrapped up breakfast and then literally gutted it. I took everything out of the refrigerator, including the drawers and the shelves, and I washed everything in a sink of hot, soapy water. I scrubbed the interior walls of the fridge, and then put it all back together. It was so clean, all the food became REFRIGERATOR ACCESSORIES. All the yogurt labels faced the same direction, which made my Type A personality sing with unadulterated joy. I threw away two (now empty!) bottles of French’s, as well as a bottle of lemon juice that expired before we set our fireworks off in July. And when all of that was done, I hauled out the stainless steel cleaner, and I scoured the front of the fridge.

After standing back to admire my handiwork, and hearing the angels sing songs of great praise every time I opened the door to the big LG fridge, I decided that my work was not done. I cranked up the ’80s playlist on the iPod (because power cleaning is always best done to the noise of a good synthesizer), and I went on to scour the microwave with Clorox. I washed the fronts of all of my cabinets with soapy water. I took the cooktop apart and scrubbed the little crevices around the burners, while Joan Jett screeched in the background. (At one point, Hubs called out from his spot on the living room sofa, “I LOVE Joan Jett! She’s the perfect combination of Marisa Tomei and Mike Tyson!” People, sometimes Hubs leaves me utterly speechless.) I cleaned the dishwasher — inside and out! I scrubbed the garbage disposal. I pulled the refrigerator away from the wall and vacuumed behind it. And then, having never owned a self-cleaning oven before we built this house, and never having actually allowed this one to clean itself before, I turned to Hubs and said, “Hey. I have no idea where my oven manual is at, and I have no idea how to get this thing to clean itself. Can you Google how to clean it for me and give me the instructions?” Hubs sighed, got up off the sofa, walked into the kitchen, examined the oven (having never Googled anything), pushed two buttons, and said, “Apparently you press the CLEAN OVEN button, and then you press START.”

The oven went into total lockdown mode and cranked itself up to blazing hot degrees, and it did its little self-cleaning thing for five long hours, at which time Hubs and I opened the door and beheld the miracle!

I adore my oven more than any other appliance in this house because it cleans itself, people, and I am wondering what other things I can actually put into my oven and press CLEAN OVEN and START with. I wish the Suburban would fit in there, so I could clean it as easily.

After four hours of manual labor the likes of which no prison camp has ever seen, I declared my kitchen to be clean enough for the first week of January. 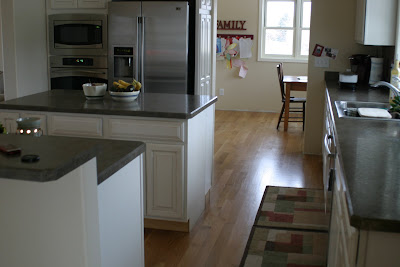 After it was all done, I took both Hubs and the boy aside and whispered to them, “Look at the work Mama did in the kitchen! Doesn’t it sparkle? Y’all just stay out of it now. If you need food, I will bring it to you, but you will not bring yourselves into the kitchen, m’kay? If you don’t follow the orders and stay out of the really clean kitchen, I’ll set up a little invisible fence, and you’ll both get shock collars to wear around the house. Love you guys!”