Blogger and I are already on unfriendly terms tonight, because…land’s sakes! I uploaded an image, and blam! Without me deciding to do anything with that image, Blogger published it as an untitled post on my blog.

Because apparently printing it once on my blog without my nod of approval just wasn’t good enough, so the picture ended up on there twice, appearing in two different, unnamed posts.

Oh, Blogger, you are bringing me great joy right now with your little antics. And your tendencies to squish my paragraphs together whenever I have a snapshot in my nightly post, which makes my Type A personality have to do some editing, over and over and over, until you finally allow it to appear as I have typed it…well…let’s say that this just pushes me plum to the brink of the type of madness which can get you committed.

With the exception of Blogger’s nonsense tonight, we have had a fantastic weekend.

We had our friends, Cody and Jeff and G, over on Friday night, because I had the hair-brained idea that I should make some homemade cinnamon rolls. And by homemade, I meant the real deal: flour, oil, sugar, and yeast. Since I have a tendency to kill yeast without blinking, and have even become known in some parts of the Lower 48 as the Certified Yeast Killer, I was reluctant to commit to the cinnamon roll recipe without supervision.

And by supervision, I mean that I was reluctant to commit without just handing the yeast packets to Cody with these words: “I shall close my eyes now, and just do what you have to do to make the yeast work.”

And she did. And over the course of five hours on Friday night, we made 50 cinnamon rolls from scratch, as well as three pizzas.

And when I say we, I really mean that I stirred the mixture of dough three or four times, and I also put some cheese on one of the homemade pizzas, and then I kept Cody company while she did miraculous things in my kitchen.

I may have mentioned one or nineteen times that I tend to get the vapors and swoon if a recipe calls for more than five ingredients (including the spoon and the pan).

Cody also brought wine to our home on Friday night, and I’m such a cheap date, that one glass tends to act as a full-on Ambien pill for me. Suffice it to say, I slept like I was on an anesthetic IV drip all night, and woke up feeling wonderful on Saturday morning.

I can’t even remember the last time I successfully stayed asleep that long, but wow! And even the boy (who did not have wine, since he is, you know, nine) slept until 8:00 on Saturday morning, and I think that Hubs and I can count on one hand the amount of times that little boy of ours has slept past 7:30 AM. Our boy has absolutely no hamster tendencies whatsoever. He sleeps all night, and he gets up and prods the rooster awake.

On Saturday morning, we baked our cinnamon rolls, and we got a little giddy with how wonderful they tasted. OH MY WORD, BUT WERE THEY EVER SCRUMPTIOUS! Hubs wanted to know if I loved them enough to make them a second time, and I simply stared at him and said, “There were far more than five ingredients in this recipe, plus — PLUS! — yeast!”

Hubs hung his head and sighed. “But I love these cinnamon rolls.”

His sadness and his puppy dog eyes were almost my undoing. I may have mentioned that perhaps (per! haps!) I could try them a second time, but I will need a few months to debrief after this baking session.

This baking session in which I may have done nothing more than stir a few times.

The rolls were so good, we even took a few to my parents, because a recipe that makes 50 cinnamon rolls calls for some sharing.

Afterwards, we came home, and I looked at Hubs and said, “Should we clean the basement today?”

Hubs looked at me and said, “Sure.”

And then we both sat down with a book and proceeded to spend some quality time in companionable silence, reading, while the boy high-tailed it outside to ride his bicycle with the cute neighbor boy, because, although he is a fantastic reader, he would never, ever choose to do that activity willingly. It takes a cattle prod in the backside to get him to sit down with a book.

Clearly, Hubs and I were quite ambitious on Saturday. The condition of our basement reflects this.

Eventually, the boy came running inside and announced, “We’re going to go ride four-wheelers and motorcycles now!” He was a bit breathless with the excitement of it all. Basically, this meant that Hubs had to get off of the sofa and help the boy start his four-wheeler, because it has been sitting all winter, and it can be temperamental sometimes.

After they both smelled like oil and exhaust, the boy raced his four-wheeler over to the cute neighbor boy’s house, where they began racing like the testosterone-sporting creatures that they are, until I nearly had a full-blown panic attack. Our son is the least competitive creature who has ever been born. He simply steps aside and graciously allows others to finish ahead of him, because finishing first has never been a big concern of his. But yesterday afternoon, he was determined that the cute neighbor boy’s motorcycle would never, ever, not at all be in front of his four-wheeler, and if he had to cheat and cut across the dirt track to get himself in the lead position, then this is what he did. Naturally, the cute neighbor boy also wanted to lead the circle racing, and he soon caught onto the whole concept of cheating by cutting across the track as well. In the end, it was a race filled with nothing but cheating, and we could hear their laughter echoing from the far side of the field.

I was simply amazed that they managed to avoid a collision with one another. 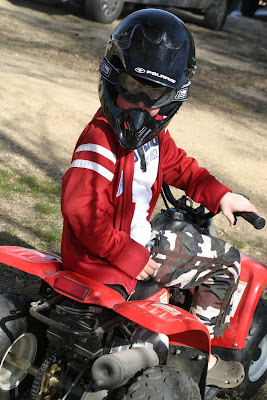 And also? Even though height is something that the boy was not blessed with — not at all! — we have discovered that he has grown enough to look entirely too big on his little 50. Hubs made the comment yesterday afternoon, while the boy was driving at full speed, trying to cut the cute neighbor boy off, “We need to get him a bigger four-wheeler. Maybe we should just get him a dirt bike.”

Owning a dirt bike usually tends to lead to bigger racing than what the boy and our cute neighbor boy were doing on Saturday afternoon. Mama isn’t sure she’s ready to handle this. Hubs simply gave me the look, which said, without words, “He is old enough.”

I have grown to hate that look from Hubs. Hubs claims that God gives mothers to little boys to keep them safe, and that He gives daddies to little boys so that they can have some fun in life.

Afterwards, when the now-too-small four-wheeler was parked in the garage, I overheard Hubs say to the boy, “We need to get you something a bit bigger and a bit faster.”

On Saturday night, my parents came over for dinner, and we had the World’s Very Best Pot Roast, which has become my speciality. It requires six ingredients, so it’s pushing it, but it tastes so good, it’s fully worth it.

Today, we went to church, and during the middle of the service, the boy leaned over and whispered to me, “I have the worst headache of my life!” And later, when the service was over, he said the words which scared me to death: “I would like to go home and lay down for a nap.”

People, any mama worth her salt knows that those words are an invitation to trouble.

The kind of trouble which usually ends with an enormous puke.

The boy did indeed come home, and he was asleep within minutes. Sound asleep. On the sofa. I told Hubs, “This does not look good.” I think the last time the boy willingly gave himself a nap was in 2003. When he woke up, he announced, “I feel like I may actually puke today.”

So, we spent the day close to the toilet. We’ve read some books; we’ve watched some TV; the boy soaked in the tub and ate some Tylenol. And then, the boy asked to go to bed at 6:20 this evening.

We are on Puke Watch ’10 over here at our house. So far, the storm hasn’t hit, but for some reason, my mother’s intuition tells me it’s coming.

Kind of like I know that as soon as I hit the bright orange “publish post” button, Blogger is going to squeeze all of my paragraphs together into one big lump, and I’m going to spend some quality time fighting it tonight. Wish me luck, people.