Sixteen years ago tonight, I sat down in the passenger seat of Hubs’ car, and he took me on our very first date. 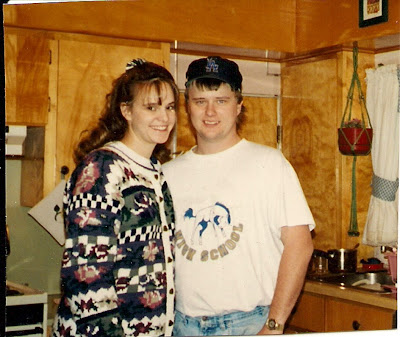 And let’s not even talk about that sweater I’m wearing! Although completely trendy in ’94, it is now considered one of those fashion trends that should never have happened, for so many reasons. The first of which is that it looks like a quilted bedspread. Oh, Stacy and Clinton would have a field day with that sweater on their show now!
And the hair? People, that was no permanent! That was the get-up-four-hours-before-you-had-to-appear-in-public-so-that-you-could-curl-every-single-last-strand-with-a-tiny-curling-iron hairstyle.
Goodness, I’m glad that hairstyle died out. Right now, sixteen years later, I’m sporting the Mom ‘Do. You know, mostly flat, lucky if it gets curled, but happy that it usually gets washed, sort of hairstyle. And, sadly, I still have the sweater. It’s in a box somewhere. I have no idea WHY.
Dear Hubs,
It’s been a great sixteen years. I am happy that you cut the mullet off. I am happy that I don’t have to get up at 4 AM to curl my hair these days. I am happy that we have the boy, and that I can now differentiate between Camaros and Mustangs, thanks to Brother’s impromptu training class which I unexpectedly found myself enrolled in. You have made me deliriously happy. Thank you for calling me one March evening to invite me to play softball, even though softball didn’t start until September. You know how I like to accomplish things early!
Love,
Jedi Mama 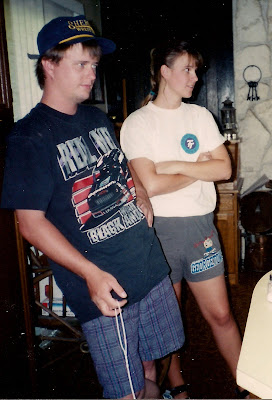 4 thoughts on “Sixteen Years of Togetherness”