I may have mentioned once or twice (or thirty-three) times that Blogger and I are having some issues with one another, but last night we stooped to a new low.

Yes, I uploaded a bucketful of pictures. Yes, Blogger squished my paragraphs together, and made my head ache with pain, as I tried my hand at editing, over and over. But then, as I was wrapping things up, and just when the proverbial light was beginning to shine at the end of the tunnel, I realized that Blogger had vaporized one of my pictures.

I uploaded a group shot; Blogger kicked it out. Way to go, Blogger. Bully! Naturally, I only realized this as I was finishing an eighteen-hour editing streak, so no way was I going to attempt to reload the lost picture. I wasn’t interested in working the Editing Graveyard Shift.

So here it is, the picture which is now, apparently, floating around in another dimension, where pictures that are zapped from Blogger end up.

This was our herd of children on Saturday, at the top of the very steep hill. When we were sledding. After they’d all eaten lunch. Andrew is still sitting in the black sled. He wasn’t going to move, not for lunch, and not for a group picture. Thankfully, Andrew is rather lightweight, and we simply steered his little black sled over to the herd, stationing him front and center. They’re all kind of cute, aren’t they? Eleven kids; seven million and four trips down the mountain, on various sleds, between them. Andrew contributed one trip to that overall total, as he quickly determined that he was not sledding material, and that he wanted to return to the South, where it doesn’t snow. 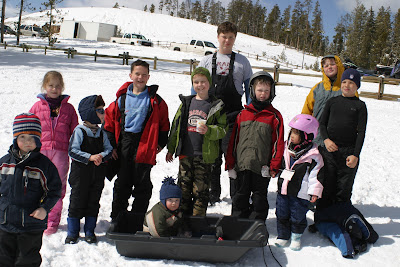 After we had brought the boy and Ben to the brink of the kind of physical exhaustion known only by soldiers and crazy people who run those one-hundred mile races, we took them to the local 4H carnival. The boy, who had sweat like a bulldog in his stocking cap on the mountain, yanked his hat off when we reached the carnival, and low! If there was a contest for the worst case of Hat Head, he would have won it, hands down, and he would have strained under the weight of the giant trophy handed to him. He looked like we’d just yanked him out of the washing machine and tossed some dry clothes onto him. Naturally, we ran into umpteen thousand people that we knew, and they all said, “Nice hair, Boy!”

This is the boy and Ben shooting rubber band guns at the carnival. They both had wicked aim, and, between them, they managed to shoot eight targets, the wall, a window, the floor and a bucket full of extra rubber bands. If they have any hopes of being snipers or great marksmen, they will have to spend a few more hours at the shooting range. When I pointed this out to them, they replied, in unison, “You can’t really aim a rubber band gun! It’s just stupid luck!” 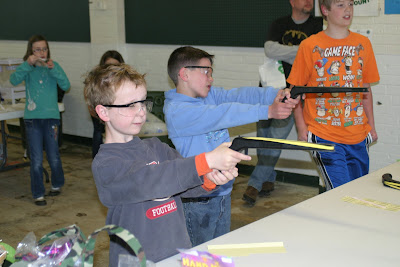 As our luck would have it, a photographer from the local newspaper was at the carnival, and he snapped a photograph of the boy and one of his classmates, Ellie, playing a game together. On the one day out of his entire nine years that his hair looks like it was combed with our Kitchenaide mixer, the boy made the front page of the newspaper. In color. Mama bought some extra papers, for keepsakes. We want to remember the Bad Hair Day. Forever.

In other news, Spring Break ’10 continues at full throttle here at the Jedi House, as the boy’s buddy, Enzo, has been here all afternoon. And he brought pajamas. And a sleeping bag. And what with the rain coming down in torrents this afternoon, the boys were stuck inside, where they were perfectly content to dress up in some strange combinations of costume clothes, and simultaneously rot their brains out with PlayStation 3 games. At one point, as I went downstairs to switch loads of laundry, one of them was wearing an old graduation gown and a tie, while the other one had on a bathrobe and a helmet from Star Wars, and they were both shrieking at the big screen TV, trying to keep their Mario Karts on the road.

And yes, the boy’s green T-shirt IS on backwards. He wore it that way, all day long. When I pointed out that his shirt needed turned around at 8:30 this morning, he simply said, “I like this shirt better backwards. They put the best design on the back of it, and I like to see the design, and I can’t see it, if I wear it the right way. So I’m wearing it backwards.”

Oh, to be nine years old and full of simple reasoning again. 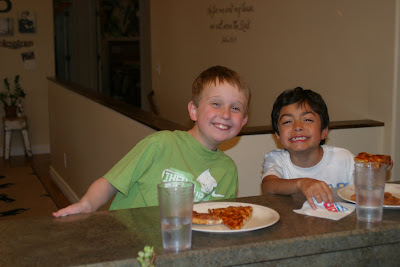 Happy Spring Break, people! We have more plans for later in the week (big, fun plans!), but right now, we’re hanging out at the house, laughing hysterically. In our bathrobes. And our Star Wars helmets. And some of us have our shirts on backwards. 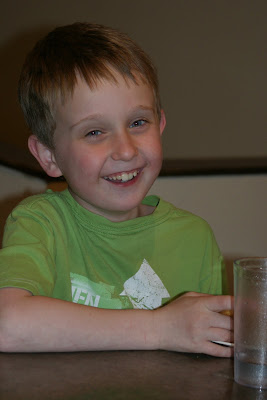