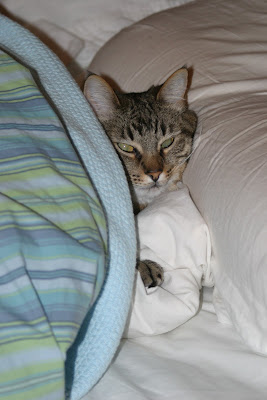 Normally, her eyes do not glimmer with the green glow of Alien Cathood. This is a little effect of flash photography. It has to do with apertures and ISO and shutter speed and wind velocity and planet alignment and caffeine intake, and sometimes my brain is so overwhelmed with everything that you must know to be a professional photographer, that I go into shut-down mode, use my blink-the-flash-all-the-time-on-every-single-picture setting on my camera, and feel shame that I will never be classified as a decent photographer, even though I want to be a decent photographer very badly.

And then, after taking my PhotoShop class at the college, I realized that I am fully equipped with enough knowledge to get rid of red eyes on people in any given snapshot, but green, glowing cat eyes simply stump me.

So, it is what it is, people. Cat 1 has shining green eyes here, which she normally doesn’t have, and that’s how we’re going to run with this picture at this late stage in the ball game.

Cat 1 came into our lives when she was six weeks old. That was five years ago. She was the size of a plump hamster, and she was stinking cute. Her meow was tiny and pathetic and sweet, all at once. She was too small to climb the stairs in our house, because she couldn’t jump high enough to go from one step to the next. She was a honey of a kitten.

And then she grew up, and we realized, by the time she was three months old, that her personality closely resembled every villain that we could think of. Voldemort. Darth Vader. Nellie Olsen. Captain Barbossa. Jason Voorees. The Sheriff of Nottingham. The Wicked Witch of the West. Cinderella’s stepmother.

Cat 1 likes me, and she usually likes me quite well. I’m not sure why I was picked to be her favorite, but I don’t complain about the safety I have because of her decision. Cat 1 tolerates Hubs and the boy. Cat 1 will let my dad scratch her back, under limited circumstances. Cat 1 will draw blood and sink her teeth into every other person in existence. Babies and toddlers are no exception; she will remove a pound of flesh from their arms as joyfully as she will for someone in adulthood. She enjoys maiming. She enjoys leaving scratch marks. She enjoys removing fingers and ears from people. She enjoys being mean and nasty.

And when Brother comes over, she enjoys going completely feral and trying to get his jugular. Brother and Cat 1 do not enjoy one another’s company at all. Never. Ever. Cat 1 has made it her lifelong goal to remove Brother from this life. Thankfully, Brother outweighs Cat 1 by many pounds, and he has managed to stay alive, so far. Brother often gives thanks that Cat 1 only weighs 8 pounds. If she weighed any more than that, she might be able to succeed in harvesting his internal organs.

Hubs and Cat 1 have many issues.

Hubs, you see, has it in him to become a crazy cat man. Hubs adores kittens. He would willingly adopt every kitten in existence and bring them all home, if he thought that he could get away with it, but I insist that two cats in our house is two cats too many. I have to invest a great deal of time in telling Hubs to put other peoples’ kittens down, and that he may not bring them home with him.

Hubs wants nothing more than to snuggle Cat 1 all the time. Cat 1 wants nothing more than to remove Hubs’ eyeballs from his head. They go back and forth. She pretends to hate him, yet she wants to play tag with Hubs, and she will, literally, run by him and smack him with her paw, until he chases her. It’s become a nightly ritual. And, bless his heart, Hubs enjoys his nightly game of tag with Cat 1. He will, in fact, laugh out loud as she hurdles by and smacks him, as he says, “She got me! I’m IT!” And then, he must chase after her and smack her a good one, before she will, in turn, chase him again. How she learned to play this game is beyond me, but she’ll only play it with Hubs.

What she hasn’t enjoyed doing, however, is sitting quietly in Hubs’ lap, while he watches TV. She knows that Hubs wants her to do this, so she deliberately avoids it at all costs. Hubs has tried coaxing her, luring her, and trapping her, and he loses every single time. She will not, under any circumstances, join him in the recliner for hockey games, no matter how much he begs and pleads with her to do so.

But then, in the last month, Cat 1 has decided that she wants to sleep in in the mornings. She does not want to get up, and she specifically wants to sleep in the bed, like the people do. She wants a pillow under her head, and she wants the comforter over her body. I believe it’s her way of saying, “I Will Be the Queen Now.”

We all know, though, that I am the Queen, and I’ll put my royal scepter down hard on her backside, if she thinks she’s going to rock my throne.

In the last month, whenever I get up to take a shower (since my routine takes approximately two hundred times longer than Hubs’ morning routine takes), Cat 1 will get into bed with Hubs, and she will snuggle with him, as long as he lets her have a pillow and some covers. She does not do this because she likes Hubs, or because she has changed her mind about Hubs. She simply uses him to get her wishes fulfilled, and Hubs does not mind being used in this manner at all.

And then, when Hubs gets out of bed to take his shower in the mornings, he covers her up and tucks her in, like she was a baby princess kitty.

And then I find her exactly like she appears in the photo above, minus the glowing green eyes, which is simply due to flash photography, which we have already talked about.

I am the one who must yank Cat 1 out of the bed every single morning now, so that I can make the bed, and afterwards she gives me the evil eye and lets me know that she considers me to be a wicked stepmother, and that I am on her list.

The list which says, “If she and I were ever in head-to-head combat in tanks, she would probably be unable to stop herself from pushing the fire button.”

I just laugh at her and remind her, “You don’t have thumbs. You won’t be able to successfully drive the tank.”

1 thought on “The Princess and the Wicked Stepmother”