Hubs is extremely excited to go back to work tomorrow.

So he can rest and recover from his weekend.

Because we did some stuff this weekend. Stuff that required muscles. There was no loafing around at our house.

We started the weekend on Friday afternoon, at the boy’s school. His class hosted a terrific little poetry reading program. Hubs and I had never, ever, not one single time been to an official poetry reading before, so we weren’t even aware of the fact that the audience snaps their fingers instead of clapping. Thankfully, Hubs and I are rather brilliant people, and we caught on quickly. I think it was the threat from the boy’s teacher, when she said, “If you forget to snap and end up clapping, you’ll be asked to sit on your hands for the remainder of the show!” You don’t have to tell us twice about consequences. Hubs and I were terrific snappers.

The kids were so cute. They all wore their school t-shirts, and they sat on the big stool, and they read their poems into the microphone, while the audience prepared to snap. Naturally, the boy was the very best poet in the show! 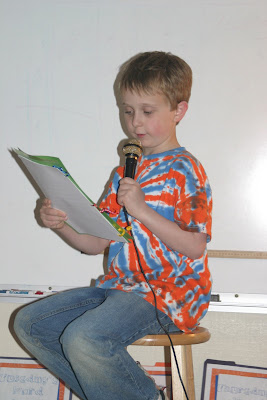 This is the boy and his buddy, Kellen. They’re both a couple of nutty punks. And they both did a super job in their class poetry jam. Actually, all the kids did a great job. The highlight, though, was the fruit pizza that Cody made for snacks afterwards. All of the parents brought treats, so that we could have a little plate of goodies during the poetry jamming. The blue ribbon would go to the fruit pizza. On account of the fact that I have a close relationship with sugar cookie crusts slathered in cream cheese. The fruit, in my opinion, is nothing more than decoration. And Cody? Well, I might have mentioned her before. She can cook. She doesn’t disappoint with anything that emerges from her kitchen. 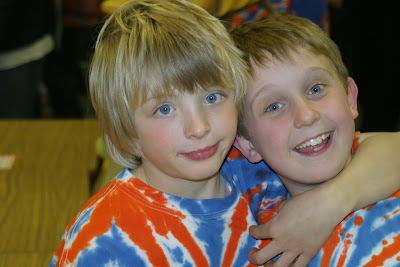 Eventually, the poetry jam wrapped itself up, the fruit pizza disappeared, and we headed off to a soccer game. This is the boy and his buddy, Enzo. They’re also a couple of nutty punks. The boy did a fantastic job in his soccer game, even though he took a ball to the face and ended up with a nose that decided to gush blood everywhere. And when I say everywhere, I mean all down the front of his shirt, onto his pants, and all over Mama, who was trying to clean it up. Oh, and the wind blew. And when I say that the wind blew, I basically mean that it blew like a hurricane, and I wore my hair down, so I was constantly picking strands of hair out of my freshly-applied lip gloss, until Mam (the boy’s grandma) brought me a clip for my hair. Mam is nice like that. 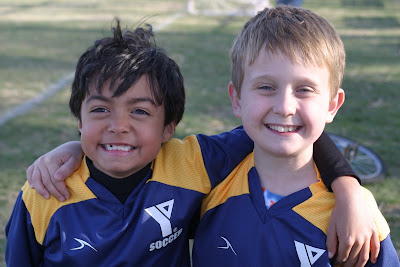 When soccer wrapped up, Hubs and I sent the boy to spend the night with his buddy, Gage, and Gage’s little brother, Deedan. This trio is also a pack of nutty punks. I was later informed that the boys ate their weight in pizza, played video games until their brains leaked out their ears, jumped on Gage’s trampoline for some exercise, and got up for the day at 5:00 Saturday morning. 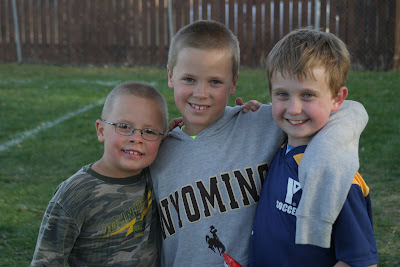 On Saturday morning, Hubs and I found ourselves alone, what with the boy being at Gage’s house and all. And we could have slept in, only we couldn’t. I was all set to snooze late, but the singing birds woke me up. So Hubs and I got up early. And we went to Starbucks. (Because why wouldn’t we?!) And then we went to watch our nephew, K, play soccer. K is also a nutty punk. K’s soccer game was at 8:30 Saturday morning. Hubs and I have gotten up at the crack of yuck for two Saturdays in a row now. Hubs and I are hoping that this won’t become a habit, but let me tell you this: The line at Starbucks is relatively short at the crack of yuck on a Saturday morning. 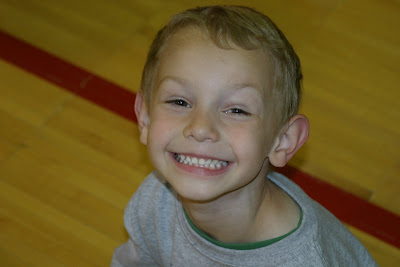 And then, after K’s soccer game, Hubs and I went to Home Depot. After building our house from scratch, I don’t care if I ever walk through the doors of Home Depot again. I have been inside the bright orange store more times than I can possibly count. However, we’ve lived in our house for over a year and a half now, and we have never put knobs on our kitchen cabinets. The primary reason for this is my Type A personality, which was quickly overwhelmed with all the knob choices that I had before me, so I simply went into shut-down mode and mumbled, “No knobs. Ever. Can’t make a decision.” And so we’ve led a knob-free life. This was a photo of our knob-free cabinets, and one of the eighteen Cokes that Hubs drank on Saturday afternoon to get him through all the drilling. 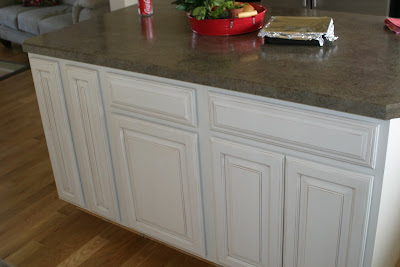 After making a big commitment to some knobs and dumping many, many hard-earned American dollars onto the cash register at Home Depot, we were allowed to leave with one sack filled with knobs. It was highway robbery, that’s what it was, people. Hubs spent the day drilling holes in my cabinets, which made my heart palpitate. What if I hated the knobs, when they were on? What if I wanted to change the knobs later, and I had holes already drilled which didn’t match with the new knobs? Drilling holes into your cabinets is a Major Commitment, people. But, I’m pleased with the work Hubs did. Hubs is quite handy to have around. Our kitchen cabinets now look like this: 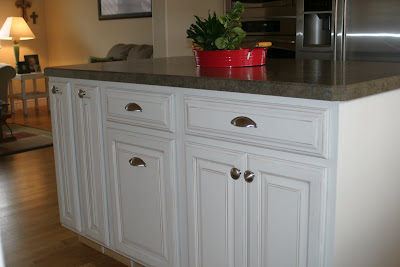 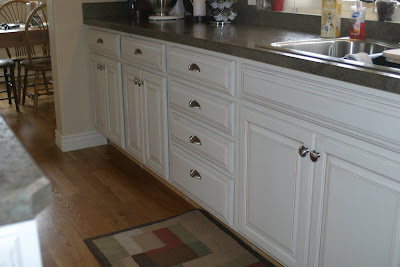 Later on Saturday, Cody and Jeffrey came over, because Jeffrey wanted to scope out our backyard.

Because next Saturday, people, Jeffrey is going to be bringing a full-sized backhoe into our backyard, and he will level it. And eventually Hubs and I will throw in some sprinklers and some sod. When you build a house, there is a never-ending supply of things that will suck you dry financially until your internal organs all hurt with the horror of it. You will need things like knobs for your cabinets and a sprinkler system for your backyard, and you will realize that you can no longer afford to eat, so you start planning meals around water and air, which are relatively cheap.

On Sunday (today!), we went to church. And then we had lunch with Amy and PH. And then we really got to work. I worked inside the house, and I scrubbed and scoured and cleaned and purged. I vacuumed and mopped and dusted and did laundry and worked up a sweat. Meanwhile, Hubs and the boy crawled under our deck, and they spent the entire afternoon digging a ditch beneath the deck to run irrigation pipes in.

Irrigation pipes which will eventually bring the water to my backyard.

After it is eventually leveled and covered in glorious sod.

Hubs and the boy worked up enormous sweats. The poor boy is a bit stiff and sore tonight. But, people, listen. There are only a handful of things more wonderful than watching your only boy work like a grown-up, right beside his dad. My heart grew with pride over that boy today, as he diligently worked with his shovel to help dig a ditch. Hubs and I could catch a glimpse today of the man he’ll be someday, and that man is going to be a mighty-fine shoveler.

And then, we had family time this evening.

We cleaned the fish aquarium together. On account of the simple fact that OSHA was about to shut it down, since we couldn’t actually see the fish swimming around in the tank. Algae can grow and multiply very quickly, we have learned. Eventually, it grows quite thick and obliterates your view of the fish, which is actually okay, if you don’t really like looking at your fish. But, it doesn’t always smell fresh; that’s a bit of a downfall.

But not now. The three of us scraped algae and rinsed algae, and the fish are living in a tank that Martha Stewart would be proud of tonight.

And this, people, is the boring, C- version of the essay entitled, “How We Spent Our Weekend.”

I’ve never been overly fond of a solid C-, but it’s going to work out just fine for me tonight, because I’m plum tuckered out, and this is all I’ve got to give to the blog.