This kid is kind of cute, huh?

This is the boy’s look these days, whenever a camera is pulled out. It’s the forced smile. It’s the smile that says, “She asked me to grin for the camera, and she has the power to ground me until I’m old enough to take the SATs, so I guess I will. But I won’t put any effort into the smile. She can make me smile, but she can’t make me mean it!” 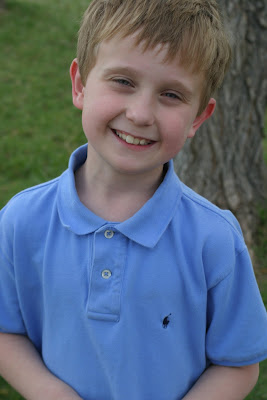 The boy’s buddy, Kellen, lives outside the city limits. Just barely, but enough to qualify for having farm animals live on his property. This last weekend, we had a sweet message from Kellen on our answering machine, which stated, “Hey, Boy. This is Kellen. And we bought some chickens, and they are SO cute, and they’re just babies, and we want to know if you want to have one all for your very own, but we’ll keep it at our house, since you can’t have chickens at your house, and you can come feed it, and you can pick out a name for it, and everything. I really want you to have a baby chicken of your own, so call me back. And also, which Lego set do you have from the Atlantis series? I want some Atlantis Legos, too. Call me back very soon and tell me about the Legos. And also tell me if you want a chicken of your own or not. ‘Bye.”

This is what Kellen had at his house. Little bitty chicks. The boy picked this one out to be his very own, which he will keep at Kellen’s house. The baby’s name is Bertie Bott. I asked Kellen’s mom if she wouldn’t also mind buying the boy a puppy and a pony, both of which could stay at her house with the baby chicken. 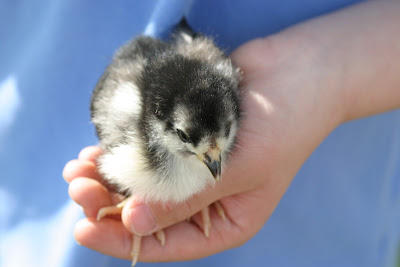 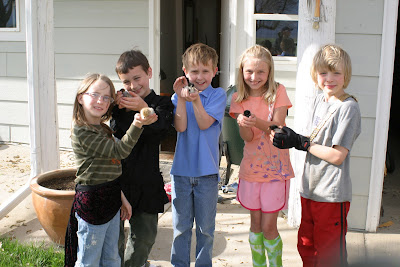 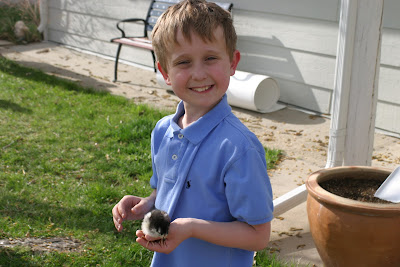 The boy gets to take a shift now and then at cleaning the chicks’ cage out. He gets to feed the little batch of babies and change their water. He is learning the art of Chicken Farming at the age of nine. He has also learned to flip his baby bird upside down and rub her belly, which puts little Bertie Bott into something of a comatose trance. She seems to like it. She closes her eyes and lets the boy rub her belly when she’s flipped over like that. She is also the slowest of the baby birds to crawl through the drain pipe. Her time on the obstacle course is going to have to get a lot quicker, if she ever hopes to attain gold for the US Farm Bird Association. However, she’s the one who can zip down the edge of a two-by-four board the fastest, so she has some redeeming athletic qualities. 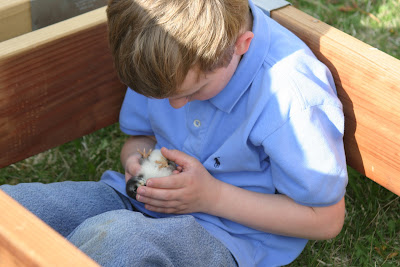 The boy’s friend, G, has a chicken too. G is a little more cautious with her bird than the boys are. G wants to insure that her chick actually makes it to adulthood, so she snuggles her and keeps her safe. The boys want to snuggle their chicks, too, but they also want to be the owners of the chick who struts through the obstacle course’s drain pipe the fastest. Boys are like that. 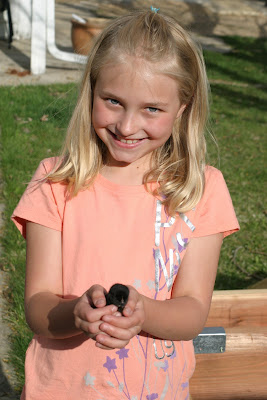 Naturally, the chick-loving wore off after an hour or so. Then the costumes came out. I may have mentioned one or nineteen times before on this blog that costumes are not just for Halloween at our house. Or at Kellen’s house. Costumes extend from October clear into April, and they’ll cycle into next October, too.

This is Kellen, who may or may not be flashing the sign for peace. Actually, I think that this is more of a sign indicating that he’s a nutty punk with some attitude and a really sweet cape done up right in Oriental fabric. 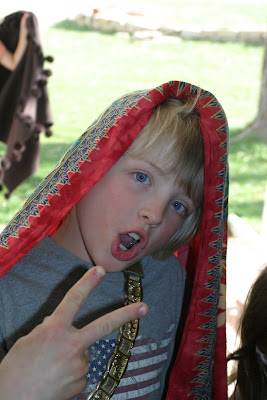 One of these black-suited creatures is the boy. The other one is his friend, Patrick. My favorite quote of the entire afternoon came after the kids had been chasing one another outside for more than thirty minutes. They were all swinging sticks and swords at one another. Or rather, the boys were. The two girls were trying to dodge the swinging sticks and swords and simply stay alive. At any rate, while the moms were standing on one side of the house, chatting (as moms are prone to do), we heard someone yell out, “I CAUGHT HIM!! I have him! He’s our prisoner!! BRING ME THE KNIFE!!!” 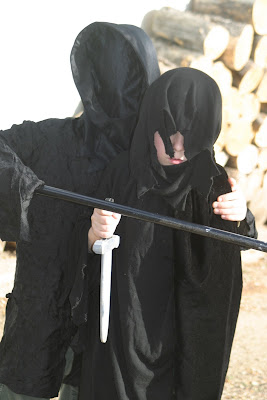 Clearly, this would be our pack of children. They can go from cuddling baby chicks one minute to dressing up like Death and maiming each other the next minute. My good friend, Nicky (who was the boy’s first grade teacher) actually has a theory on why men are better equipped, emotionally, to go off to war than women are. It’s because they have staged their own deaths a thousand or more times as little boys. The boy falls into this category. He is nine-and-a-half, and he’s already been killed off in knife fights, light saber battles, by grenade explosions, by swinging swords, by magical powers, by the Force, and through bazooka fire. And that’s only the section of the list I can actually remember.

Boys are really cute, and they’re wonderful, and I thank God for mine every single day. I consider him to be one of my greatest blessings in life. But when boys are not snuggling baby chicks and speaking softly to them, they can play some really weird games.

Disclaimer: No baby chicks were injured in the making of this post, regardless of the fact that they all endured the Great Chick Obstacle Course. Naturally, Hubs made numerous references to them being snack food and how they’d look smothered in mustard and dotted with black pepper, but he’s greatly influenced by Uncle Ted, and no one really pays much attention to Hubs anyway.