Today was one of those perfect days, when all seems to be well and right.

Except for Hubs’ enormous Man Cold, which drove him straight to the walk-in clinic this morning. Hubs does not visit the doctor, unless he is convinced that he is at Death’s door. Hubs is convinced that very few illnesses exist which cannot be cured by spending a day in the recliner, in front of a series of recorded hockey games and Glenn Beck episodes, with four Cokes over ice right next to him. Maybe it was the fact that hockey is done for Hubs, what with the Avalanche being on summer vacation now and scattering hither and yon to random golf courses across the globe, and every recorded game that Hubs has stashed away, taking up memory space on the DVR, has been watched that simply announced that Hubs would not be able to kick this one on his own. (I know, I know. There are probably thirteen different grammatical errors with that last sentence, but it’s after 9:30 PM, and it is what it is.)

At any rate, Hubs was spiraling downhill quickly, so he took himself to the doctor, and the doctor gave it a name.

Hubs loves to give things a name. He gets it from his friend, Paul, who claims that phrase as his life motto. Paul is always surveying situations and announcing, “Give it a name!”

“Hey, Paul. These burgers that you grilled aren’t really burgers. They’re more of a steak on a bun.”
“Give it a name.”
“Um…steak sandwiches?”

“Hey, Paul. I can’t believe you actually sold your Harley!”
“Give it a name.”
“Um…Harleyless?”

At any rate, the doctor gave it a name today, and Hubs was able to secure a prescription for antibiotics, so hopefully the little white pills will show the Man Cold to the door and kick it right out.

But yes, other than the Man Cold, today was perfect. The weather was perfect. My PE classes were perfect. No one took a ball to the face. No one bled. No one cheated. This evening, we had the windows opened, and the fresh breeze blew threw the house, while I tossed a massive salad together (Think, peppers! In red and yellow and orange! Think cucumbers! Think green onions! Think dark red kidney beans!), and Hubs grilled steaks. We could hear one of the first lawn mowers of the season going in the background, and the shouts and cheers of kids across the street, who were having soccer practice at the park.

Eventually, our phone rang. It was Brother, asking if any of his children were at our house, because he had, quite unexpectedly, lost two of them. Two of them were supposed to have been playing at the park across the street from our house, while two of them were at soccer practice at the same park, with Coach Brother, and Brother managed to lose half of his children. I told him that the adult to child ratio at our house was two to one, which meant that we had no extras who might have wandered across the street. Brother grumbled and hung up. I am assuming that he must’ve located them, since he never called back and asked us to participate in a Lost Kids search.

And the steaks? Well, they were perfection. Gray. Gray steaks are the very best. Naturally, Hubs was disinclined to agree with me, and he grumbled that he’d been laying on the deck, soaking in the sunshine and enduring his cold while the steaks cooked, and he had, quite obviously, lost track of the time and grilled the chunks of meat for too long. I, myself, didn’t think so. Hubs likes his steaks to moo a little, which I am totally against.

And the boy? Well, he had a fantastic little keyboarding recital this morning at his school. The boy takes private piano lessons every week after school, but then he has a keyboarding class in school, on Tuesdays. Today, his teacher had the kids invite guests to their little spring performance. Naturally, we went. Naturally, I took pictures.

This is the boy, playing a little ditty while his teacher looks on. Yes, he has red eyes. Yes, I took a class in PhotoShop. Yes, I am trained to fix red eye problems. But, people, fixing them tonight would involve dragging the images into PhotoShop and doing some extra work, and I’m just not up for it. 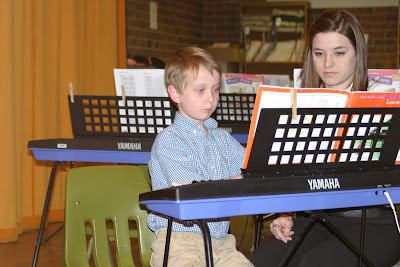 This is the boy, and one of his best buddies, Carter, during the recital. I can just hear the boy exclaiming, “Hey, Carter! Let’s use our red laser eyes and burn holes through the brick walls, so that we can go outside to recess earlier.” 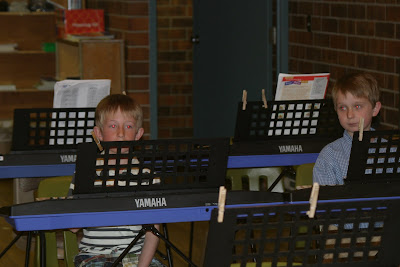 Pa came to the boy’s recital. The boy and Pa are close buddies, too. The boy is the spitting image of Pa. You should see their baby pictures, side by side. The boy got his daddy’s blue eyes, and everything else came from Pa. I think Pa may be rather proud of this. Pa’s Aunt Bonnie has told me several times, “Whenever I see the boy, it’s like looking at your dad, when he was a small fry.” Aunt Bonnie would know. She has a very strong memory. 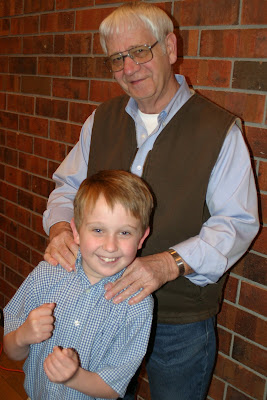 Aunt Pink (who is still in town, from clear across America) and the boy’s cousin, Miss A, also came to the keyboarding recital. Aunt Pink likes to hug the kids while she’s in town. They don’t seem to mind in the least. They’re all rather quite fond of Aunt Pink. Aunt Pink spoils them rotten and lets them have ice cream, when their parents do not. Aunt Pink is not afraid of the wrath of her three brothers, whenever she feeds their children junk food. 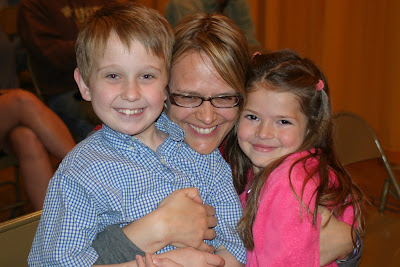 This is a group of trouble makers. It’s the boy and his buddies, Kellen and Carter, and poor Marissa, who has to put up with the three of them and their antics in keyboarding class, every single Tuesday…Tuesday after Tuesday. Poor, poor Marissa. She’s a honey of a little gal, and I’m not sure that she deserves being subjected to these three on a continual basis. Thankfully, she’s a good sport, and she tolerates them nicely. Isn’t she a cutie? I love her to pieces. And the boys? Well, I love the three of them to pieces, too. 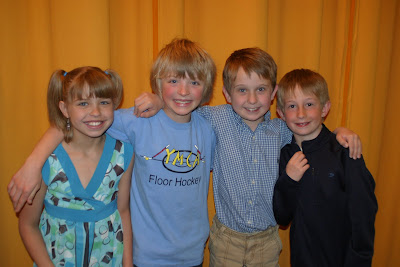 1 thought on “Sing Us a Song, You’re the Piano Man”