I’m one of those moms.

If I get up in the middle of the night to find the ladies’ room or to kick a cat, I always shuffle into the boy’s bedroom to check on him.

Just to make sure that he’s covered up and to check that all is right in his room.

Last night was no exception. At 3:00 this morning, I was half awake and a smidgen groggy, but I diligently went into the boy’s bedroom, and pressed a hand to his cheek.

And then he scared me into an early grave when he sat up and said, “Hi, Mom. I keep waking up, and I don’t feel good.”

The boy, you see, never wakes up in the middle of the night. He sleeps the sleep of Benadryl, every night of his life, so finding him awake in his bed gave me some horrid heart palpitations. It just wasn’t what I was expecting at 3 AM, in the dark.

I asked the boy what was wrong, and he said, “Well, my head hurts like crazy, and my throat is scratchy, and I’m just going to tell you right now that I’m probably not going to want to go to school.”

I considered myself warned. It was also just my luck, because I’d invited some of the 3rd grade moms at the boy’s school over for coffee at 8:00. The only time the boy is ever sick is when a Big Event is planned.

Valentine’s Day, 2003? Hubs and I cancelled our dinner reservations and nursed the boy through a raging ear infection. Christmas, 2001? We carted a small boy with a temperature of 104 degrees back home from Grandma’s house without opening our presents. So the morning when I had planned to invite some moms from the boy’s class over for coffee? Yeah, the boy decided to throw a migraine into the equation.

At 6:00 this morning, the boy stumbled into our bedroom and announced in a pathetic little voice, “My head still hurts. My throat still hurts. I probably shouldn’t spread any germs around my class, so I think I’ll just go watch some TV.”

The boy is rarely sick. Between kindergarten and second grade, he missed 6 days of school. Yep. He has a super-charged immune system, but strep throat is his kryptonite. He catches it most every year, and we spend two days with it each year, cooped up on the sofa at home, drooling in our sleep. In 3rd grade, we’ve almost matched those 6 days of absences, because we had Swine Flu ’09. And we had an ear infection. So today’s time on the sofa constituted five days gone out of the 3rd grade. That’s just a day shy of what he missed in the first three years, combined.

Hubs and I agreed that the boy should probably stay home this morning, so we pumped him full of Tylenol, tucked him onto the sofa with a book, and my coffee hour still happened. The boy popped his head up a couple of times, but really, no one even knew he was around. He read for quite a while this morning, and then he pulled out his big guns.

When the nap was over, the boy hopped up and said, “I think I need a cheese sandwich. I’m starving.” Listen, people. Hubs and I are raising a boy; we know all about starving. Yesterday, we met our friends, Amy and PH, at Subway for lunch after church. Their little girls ate the equivalent of 36 calories each. The boy ate his entire ham sandwich and a bag of chips, and then he said, “Mom, I am still starving. I don’t mean to ask for more money, but I could really eat another whole sandwich, if you’d let me buy one.” I looked at Hubs with a gaze of horror. Clearly, the Male Eating Machine has arrived early at our house. We expected it at puberty; we’re getting it in the 3rd grade. I find that stocking my pantry and refrigerator with enough groceries to last until the Apocalypse literally means that the boy will eat his way through it all in less than a weekend. And if he has a friend over, my pantry will be reduced to crumbs in a matter of hours. Yesterday, we sent the boy to get back in line at Subway, where he ordered a second ham sandwich and a second bag of chips, and then he proceeded to eat it all, until he finally announced, “My stomach is full enough now, I guess.”

Since he was starving this afternoon, I made him a Velveeta and Miracle Whip sandwich. I know. It sounds horrid, doesn’t it? When I told Hubs what I’d made for the boy’s lunch, he shivered and convulsed and said, “Stop! I can’t take hearing about it any more!” Hubs, you see, loathes, hates and despises Velveeta. And mushrooms. And zucchini. And pancakes. And other than those four things, Hubs will eat all foods. His Foods I Genuinely Hate list only consists of those four substances.

The boy, though, adores a brick of pasteurized cheese product, and when he combines it with Miracle Whip and a couple of slices of Wonder Bread, he hears the angels singing sweet hallelujahs.

I made the boy a sandwich. He ate three bites.

By late afternoon, though, the boy had made a full recovery. The headache was gone. The scratchy throat was gone. He had more energy. Imagine his outright pleasure when the cute neighbor boy rang our back doorbell and said, “Do you want to come outside and ride bikes with me?” The boy hollered out, “Mom! Mom! I’m going to go ride bikes! I feel fine now!”

The boy was devastated, and he announced with a pout, “I feel fine now. I should be outside, getting fresh air! I would have just ridden my bike slowly!”

The poor lad. I made him do his pile of homework, which Hubs had stopped at the school to get. He did it standing up at our kitchen counter, because he said he was tired of sitting down and sleeping all day.

And then he said to me, “Mom, this morning my head felt like a thousand knives were inside of it, cutting it wide open until my brain about fell out. And my throat felt like a grizzly bear was inside of it, trying to claw his way out with his sharp claws.”

Trying to inject some humor, I said, “Because a bear could really fit inside your throat, huh?”

The boy stared at me, and then he said, “Mom, I’m trying to use similes here. Similes are used in good descriptive writing.”

Oh, people. That boy of mine made my heart leap with joy! He knows what a simile is, and he knows how to use them!

Later tonight, when I told Hubs this story, he laughed, and asked, “What the heck is a simile, anyway?”

I think Hubs was sick that day in English class.

And when I say sick, I use the term very loosely. I think Hubs took many sick days from school, and spent the time outside, riding his bicycle. 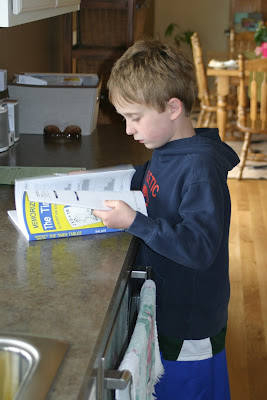