2. Apparently, Mama is suffering from another bout of severe writer’s block, and playing four games of Scrabble Blast has left her with a very UN-high score and absolutely no inspiration. And yet, Mama has a few thoughts and things on her mind.

3. Have y’all watched the season finale (or rather, the grand, end-of-it-all-forever-and-ever-amen finale) of Lost yet? Because I haven’t. And the reason that I haven’t is simply this: With that one, two-and-a-half-hour episode, six seasons of Lost will be done for me. Forever. Lost is the entire reason that Hubs and I initiated ourselves into the miracle known as Netflix. We started the series two years late, and we had some serious catching up to do. Hubs got online, fed the computer our credit card numbers, blah, blah, blah, and suddenly little red-and-white envelopes bearing movies and television episodes started showing up in our mailbox. And we were fully hooked on Lost. And, although I’ve yelled at the writers in my mind for months now and mentally encouraged them to just get this series over with already and explain some things to me, I really don’t think that I actually meant it. And I have my ideas of how it should end, and what if the writers didn’t take my ideas into consideration? Because really? I am so tired of Benjamin Linus, I just want him to be on a fast lifeboat to China, and I want Kate and Jack to smooch one another and live happily ever after, off of the island. And if things don’t work out exactly that way, and six seasons of Lost ends and leaves me upset, then what? And so…I haven’t watched what we’ve recorded on the DVR yet.

Even though Amy M. keeps texting me and screaming out, “Have you watched it yet??!!” No. No I haven’t. Amy M. replied, “I cried.” Goodness, that’s not saying anything new. She and I cry together in Hallmark commercials, for goodness’ sake!

And really? If the reason that Amy M. cried during the season finale is because Jack and Kate don’t end up together, then I’m going to wail and gnash my teeth and wear some serious sack cloth and ashes.

4. School is wrapping itself up. The boy has six school days left to be a third grader, and then third grade is over and done for us. Much like six seasons of Lost. I cannot say that I am even remotely happy about this, because, six school days from now, Hubs and I will own a 4th grader. 4th graders are considered to be upper grades in the boy’s elementary school. Up-per. As in, my baby is no longer all that little. I’m having a bit of a hard time dealing with this, people. Just thinking about it makes me cry harder than Amy M. and I do in sappy Hallmark commercials! Seriously, it was like two short weeks ago that I walked him to his kindergarten classroom for the first time, and now we’re looking 3rd grade graduation smack in the eyeball’s pupil, and I’m having some issues coming to terms with this.

Plus, the boy’s teacher this year is fantabulous. She’s amazing. She’s wonderful. She’s everything a teacher should be and more, and I am seriously going to need Kleenexes in bulk when we leave her behind in six short school days.

5. We had company for a while today, as my friend, Heather, is here in Small Town, USA, all the way from Chicago! She drove here, with two small children and a husband in tow, and Small Town, USA is a considerable distance from the Windy City. What amazed me the most was how clean her car was. Seriously, people, it looked as though Heather had just driven it straight off the brand-new-car lot, and she’s been in it for days. With two tiny boys. And fifteen boxes of animal crackers. And three hundred juice boxes. And a husband. And eighty-six Starbucks cups. I told Heather that she’ll never be allowed to ride in my Suburban, because we haven’t taken it out of town in months, and you have to conduct a full-on archaeological dig to find anything in the back seats. Take the boy’s best pair of Gap jeans, for instance. The ones that we were convinced we left behind and lost at gymnastics, as we haven’t seen them for weeks and weeks. I found them on Saturday, in the third seat of the Suburban.

Dear Hoarders,
Please feel free to come to Small Town, USA and feature us on your television show. You can use our Suburban as a starting point. We’re not proud.
Sincerely,
Mama

I tried to capture a nice picture of Heather and her boys, but three-year-old Brooks was not interested in holding still and smiling at all. He had discovered a sword out of the boy’s dress-up tub, and he was solely focused on “Fighting Goliath!” as he kept shouting out, over and over and over. This is the best that I could do at getting all three of them in the same picture. Baby Colby sacked out and fell asleep, and Brooks was swinging the sword for all he was worth, and he managed to swing it straight out of the picture just as I snapped the button on my camera. No matter. Heather and I had a great time visiting and catching up this afternoon, and I wanted to adopt both of her babies, primarily because they are no where near finishing the 3rd grade. 6. Look what I hauled home today from school. In the messy Suburban. They worked extremely hard to quit laughing and look like mean and nasty outlaws in this picture. 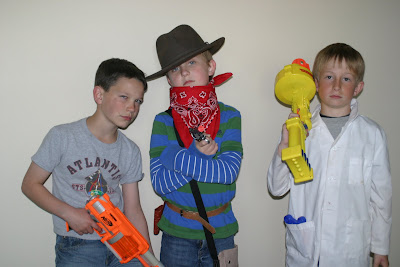 Somehow, Ben and Carter piled into the Suburban with the boy this afternoon, and I was dumb enough to ask this question: Does anyone want a treat from the Dairy Queen? Because really, what you need to do with this posse is provide an elixir straight from the sugar cane plant and disguised as ice cream for them to ingest, while they’re staying at your house. Clearly, it was a brilliant maneuver on my part, and it’s why I was never promoted to General.

At any rate, the boys came to our house, and they immediately donned costumes and staged a full-out, bloodthirsty battle on our front patio. When Heather and her boys arrived, Brooks crawled out of his very clean mini van and his eyes glazed over with wonderment and awe, as he took in the war being fought in front of him. And, because he sports a Y chromosome, he needed no introductions or fanfare. He simply grabbed a sword that had been discarded on the concrete patio, and he joined the fight, full out. The nine-year-olds showed no mercy on the three-year-old, and he needed none. He held his own ground, and I’m simply glad that none of my neighbors were home to hear the shouts of, “Die! Die! Die! Die!” being yelled from our front yard.

7. Also? Cat 1 and Cat 2 are on a mission. As I was cleaning house today, I realized that their new motto is simply to Shed Until Fully Naked. The central vacuum cleaner is getting quite the workout these days.

8. And that’s all I have for you. I need to scramble off now and decide if tonight is the night that I find out what happened in Lost. I’m thinking that I might save it for another night. It’s kind of like postponing the unwrapping of a big Christmas gift.