On Friday, the boy went home with Ben after school.

Where the deer and the antelope and the cows roam.

He didn’t return until late Saturday afternoon. He was sunburned. He was covered in mud. His once-white sneakers were black. Black, people. Black with mud. He had scratches all over his legs. He had new holes in his jeans. And his smile was wider than the continental United States. He informed Hubs and me that he had the! best! time! on the ranch, and he was full of stories. He and Ben built a fort in the brush near the creek. They played with baby lambs. They held kittens that were only days old and that still had their eyeballs sealed shut. They drove the truck (or rather, Ben’s mom drove the truck!) up into the hills, and they got stuck in a creek, four-and-a-half miles away from the barn. Ben’s mom ended up hiking the entire distance back home to get a second truck to pull them out with.

The boy announced, “Mom, when summer vacation comes, Ben said it would be okay for me to come stay with him for a whole week, and his mom said it was okay, too, and I want to! I love the ranch! I wish you and dad had built our house on a ranch.”

Yes, honey. Except for that little issue called not-enough-American-dollars, we totally would have built our house on 900 prime acres, and you totally could have had a baby sheep of your own. And a couple more kittens. And 600 head of cattle.

To say that the boy had some fun with Ben would be the understatement of the year; the boy is ready to become a full-fledged rancher.

And mostly he was impressed that Ben’s mama let them eat microwaved Pizza Pockets for dinner, which I never buy; the boy reminded me that I never buy these scrumptious delicacies about twenty times on Saturday, until I was ready to hang my head with shame and remove myself from running for Mother of the Year, 2010. Clearly, my city boy is flat-out deprived.

So yes, having the boy gone from home on Friday nights is something of a trend at our house, as he has officially been away five of the last six Friday nights. Hubs and I were, once again, faced with an evening alone.

And because we’re all about spontaneity and enthusiasm over here, we made some outrageously good sandwiches for dinner, and we watched TV.

We’re cheap dates for one another!

On Saturday morning, Hubs and I got up and faced the daunting task of cleaning our basement.

We’re not proud, people, but the back half of our basement, which is sealed off from company and the visiting world by a genuine door with a door knob, is full of boxes which have never been unpacked since we moved into this house. And also, it’s full of all of our leftover tin for heating ducts. And it’s full of leftover lumber. And tools in every size and shape and brand. I’m not exaggerating when I say that it looked like an episode of “Hoarders Gone Wild.”

Don’t judge us. We feel the necessary shame.

Hubs has always commented that I am the biggest neat freak he’s ever met, and yet I have been (somewhat) perfectly content to shut the door on the hoarding gone wild and completely ignore it. I like to call it the Monica Geller Syndrome. Remember on Friends, how Monica’s apartment was always spotless, and yet…

…she always shoved everything into the closets, shut the doors, and called it good?

I have some issues.

After some necessary caffeine-in-an-expensive-cup, Hubs and I set to it, and we sorted boxes and discarded and purged. Hubs was in one of those moods where he simply said, “Toss it all! Save nothing!” Unfortunately, I couldn’t part with the box of handwritten stories that we found, which were done by our boy and dated 2006. Kindergarten, people! We found a box of stories written in kindergarten. Naturally, I sat down and read through them, until Hubs clapped his hands at me and said, “No breaks! Back to work!” So it was back to purging and sorting.

And then Hubs found a little something that totally made him grin.

It was an old bottle of Captain Morgan, which had somehow been tucked into a box when we moved. Hubs gets excited over the most boring discoveries.

And then last night?

We tucked our sunburned, wind-blown, freshly-showered boy into bed at 7:45, and Hubs and I went to bed at 8:00. I’ve never been so exhausted and ready for a ten-hour nap in my entire life!

This morning, we went to church. Amy sat with us, and Hubs may or may not have had to say to us, “If the two of you keep whispering and giggling, I’m going to take you into the hallway and beat you.”

Hubs is a buzz killer.

After church, we got to actually take the truck to the landfill, which is always a joyful experience. The boy is downright freaked out by the dump, and he howls in outrage when we make him get out and unload the truck. His shouts of, “It stinks! It’s going to kill me!” fall on our deaf ears, and we simply make him pitch junk out of the truck. He grumbles and whines and complains, and it’s always an enjoyable experience.

Hubs and I are building an enormous shelving unit out of real wood in the back of our basement, so that we can store things like kindergarten stories and newly-found bottles of rum back there. We’re hoping that the shelving unit will bring some organization to our hoarding gone wild, and that we’ll be able to actually stack nicely-filled Rubbermaid tubs on our gigantic set of shelves.

We went to Home Depot after church today to pick up the lumber, and shopping for lumber is about as exciting as falling face-first off a ski lift. I broke two nails and ended up with two slivers while I helped load plywood and 2″x4″s. Eventually, I sounded exactly like the boy did at the dump. I whined and complained and carried on about how it was going to take a trip to the ER to extract the wooden plank from my hand.

And then the real fun began, people, as Hubs hauled out his saw and we began the actual building process.

I hate to bore you with the details, but we had a little accident this afternoon.

The nail gun, you see, terrifies me. I am not a lover of that power tool, and I refuse to use it. However, I was conned into holding boards, while Hubs slammed the nail gun around and connected them together, for all eternity.

I was staring off into space for a bit, when, all of a sudden, the nail gun fired and I was hit in the elbow!

I burst into tears! I may have screamed a little bit. In fact, I’m sure I screamed a little bit, as I jumped up and down, yelling out, “I’m hit! I’m hit!” I grabbed my elbow and tried to keep the blood inside my body, as I began expecting the moment where I passed out from blood loss to hit me.

And then Hubs began laughing.

He’d just finished nailing some of the wood together, and he was crouched down on the concrete floor. He’d still had his finger on the nail gun’s trigger, when he sat it down on the floor. It shot a nail straight into our concrete floor, which chipped the concrete, and a piece of the floor, which was roughly the size of a dime, chipped off, ricocheted across the room, and grazed my elbow.

I slowly took my good hand away, expecting to see a flood of blood, and there was a scratch that was barely a quarter of an inch long.

I cried harder! My adrenaline had simply flooded every square inch of my body, as I fully expected to die from my injuries, and I couldn’t immediately regain control of my composure.

Thankfully, I wasn’t shot with a nail. I was hit by a chunk of concrete, the size of a dime. My injury is an almost microscopically-sized scratch.

And Hubs, who should have been very apologetic and rushed to my side to see if I’d make it, simply laughed and said, “And this is why girls should never go to war!”

I don’t know why I keep the man around.

In other news, look at this picture. Isn’t it the greatest? As we were cleaning the basement, I discovered a bag of hand-me-down clothes from my friend, Nicky. Her little fellow passes all of his clothes to the boy, and we love them. And this bag of stuff, which was filled with sizes that were entirely too big for us, for the most part, had this one pair of pyjamas in it that totally fit the boy now. We tucked everything else away to save for a time when the boy is about four inches taller and about ten pounds heavier, but we took the jammies out.

And I’m not sure that there’s anything cuter than seeing my nine-and-a-half year old in footie pyjamas! We haven’t had a pair since he was three years old!

The boy said tonight, “Mom, I love these jammies! I want you to buy me more, so that I can wear them every single night now! And, do you know what? You should buy a pair for Dad, too, because he’ll think they’re super cozy, too.”

Mmm-hmm. I can hardly wait to get Hubs a pair of these!

But honestly, isn’t this snapshot the cutest thing? I’m just happy to report that my nail gun injury was not life threatening, so that I was around tonight to actually see my boy decked out in these! 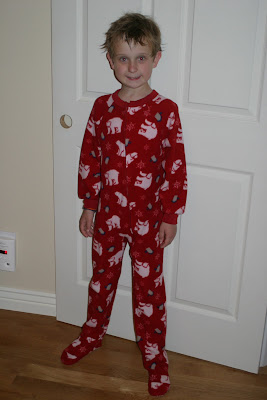