My computer at home scrolls through my pictures as a screen saver.

All of my pictures.

I have umpteen thousand and a half of them, which makes for some extended screen-saving picture time.

Yesterday afternoon, I saw THIS picture pop up onto my computer screen, and I wanted to burst out laughing and break down sobbing, all at the same time. I remember when this picture was taken, but, goodness! It’s been scads of years since I actually saw it.

It was taken six years ago. Six! Years! Ago! Do you know how many things can happen in six years? Little boys learn to ride bikes without training wheels. They learn how to read really big words. They score soccer goals. They learn to tie their own shoes. They get permanent teeth in their mouths, for crying out loud! They know what 7 times 8 equals. They learn the definition to photosynthesis.

The boy was all of three-and-a-half years old in this photo; his cousin, B, had just turned three. B and the boy have always been good buddies. I want to cry at how much time has elapsed since this picture; I want to go back and snuggle my three-and-a-half year old and pinch three-year-old B. It’s really hard to see them grow up.

But, ohmylands! Would you look at the crazed look in the boy’s eyeballs, as he pretends to drive on the porch swing?! He is holding a key, and he is apparently pretending to put it into an ignition. The boy has always been nuts about driving. He’ll drive anything. He’s probably a better driver at the age of nine-and-a-half than I am. (At least he thinks he’s capable of driving our Suburban through the car wash better than I can, but that’s a long-winded, embarrassing story for another day, when my self-confidence over my driving abilities is higher.)

And then look at little B’s expression! I think his look clearly states, “I refuse to get into a car with this nutcase!” Or maybe B is saying, with his arm slung out the pretend car’s window, “Hey, Ladies! Wanna go for a ride with me and my chauffeur? Y’all know we’re both hopped up on apple juice!”

Rediscovering this snapshot absolutely made my entire day yesterday.

I’d give anything to go back and pinch these two toddlers again and kiss their little cheeks! 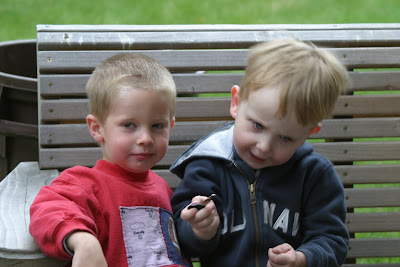 And now, if you’ll excuse me, I have to go get some Kleenex and dab my eyeballs.