We’ve been out of town for a few days.

Quite spontaneously, we loaded up the Suburban and left Small Town, USA behind in our rearview mirror. This is remarkable, simply because Hubs and I seldom drive our Suburban more than 30 miles away from home.

And then, while we were away, Hubs and I saw a bumper sticker that summed up our lives perfectly.

Middle age is when you’re faced with two choices, and you choose the option which will get you home quicker.

Can I get an Amen here?

While we were gone, we saw some former presidents, who were just hanging around, looking a bit somber and stone faced. 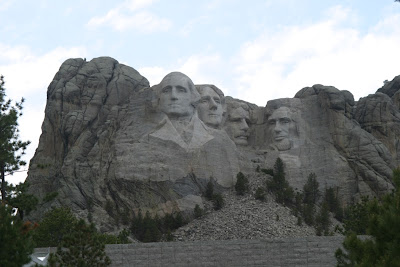 We encountered some fun mirrors.

Can I get you a stool, Hubs? 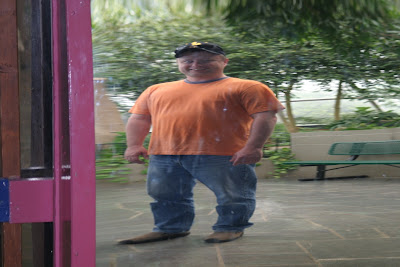 And this fellow is one of the primary reasons that the boy enthusiastically vacationed with us. Rest assured, this is one fellow that I would deliberately hit with my Suburban. In fact, I would more than likely be perfectly willing to drive off-road to squash him, if I had to. 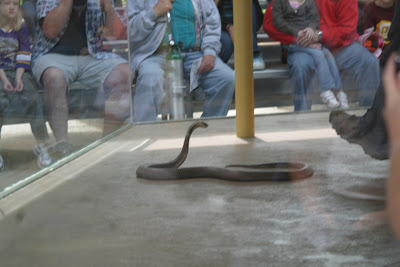 The boys panned for gold. I told them to find some baseball-sized nuggets. I’ve never been a millionaire before, but I’m fairly certain that I’d be darling at it. 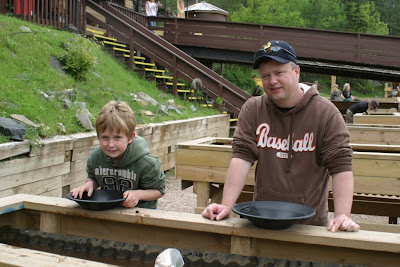 The boy could seriously pan for gold until the cows came home, a week late for their curfews. I gave up on the gold panning and spent a leisurely morning alone, touring the local antique shop and reading my book in the sunshine. I think we all enjoyed ourselves immensely.

And the boys? They each found about $7 worth of gold. I tried to talk them into selling their sparkly specks and treating us all to a Dairy Queen trip, but they were firmly set on keeping their gold. 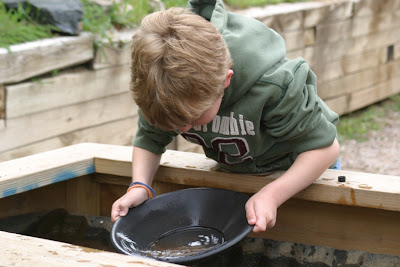 We went to a giant pit where more than 58 mammoths from yesteryear died. The excavation was really quite impressive, and, later in the day, the kids got to dig. The boy, who is convinced that he would make a fine Indiana Jones, jumped on the chance to become a paleontologist for a day. Naturally, he wanted a whip. And a hat. Even without the appropriate costume, though, the boy managed to successfully uncover the femur from a short-faced bear, as well as a fibula from a mammoth.

I actually saw some artistic renderings of the extinct short-faced bear, and I am not at all interested in him. I think his middle name is Vicious. 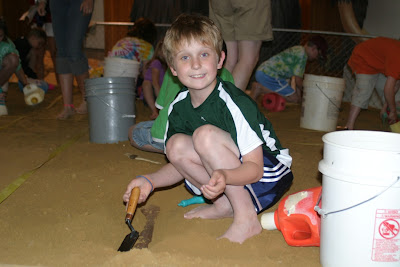 We went into a cave, too. There were more than 300 stairs. There were some tight passages. And I successfully managed to conk my head on a low part of the cave’s ceiling. 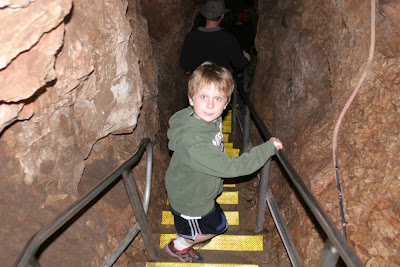 Just some highlights, people. I think we successfully crammed twenty-nine hours’ worth of fun and entertainment into each of our vacation days. Mama also averaged four solid hours’ worth of sleep in the motel room each night.

And I just have one thing to say about that!

Dear Harley Rider,
It’s okay to be an early riser. It’s okay that you parked your Harley with the very loud pipes right outside our room’s window. It’s okay that you wanted to get an early start on your day. But listen. Let’s make sure that tomorrow morning you actually take the time to examine your map before you start your Harley. Yes, I know that loud pipes save lives. But spending twenty minutes sitting on your bike, when it’s emitting its full roar of sound at the crack of ugly in the morning, in a hotel parking lot, while you consult your map in great detail, is not cool. M’kay?
Sincerely,
Mama

And with that said, the Jedi House is all headed to bed, people.