It is now Day 7,842 of the retaining wall project.

Or so it seems.

Today, Hubs granted me just enough free time to dash off to my Bible study for a few moments, because, land’s sake! I needed to meet up with my girlfriends and get a Word.

And then my mom and I made a quick stop at Amy’s new house, which is d-o-n-e. Yes, done. Done in something less than nine months. People have baked babies in their wombs longer than it took Amy and PH to have their new house built. Naturally, Hubs and I don’t like to talk about it, because our house-building project was a bit closer to the elephant’s gestation period, which is twenty-two months. Basically, I think that a baby elephant could have been conceived, carried and born, and then his mama could have been halfway through the pregnancy of the little tyke’s younger brother when Hubs and I wrapped up our house.

That is what really rocks about the words, “Our contractor.” If your contractor doesn’t spend eight to nine hours each day working as an IT Director at his full-time job, your house may be built faster than ours was.

By the time I returned home from Bible study and our short visit to see the finished house, the winds of change were upon us, and the once-beautiful morning was getting a bit overcast and cloudy, and Hubs announced, “We should probably get the yard mowed.”

Which translated into this: One of us can mow, and one of us can level these retaining wall posts and smack them with a sledgehammer for a bit.

I chose the job without the leather work gloves, naturally.

And when I finished mowing, I told Hubs, “Our yard is bone dry. I think we need to water it thoroughly. Like a big, fat soaking of sprinkled water.”

And Hubs said, “It looks like it’s going to rain.”

And I said, “We won’t get much rain, even if it does rain. Maybe a few sprinkles.”

So Hubs set our sprinklers to soak the yard, because he didn’t want to argue with me about the possibility of rain. And just as our good, solid soaking was wrapping up, it really did start to rain.

And the rain that came would have scared Noah plum to pieces.

Clearly, the retaining wall project had to be put on hold, and we started making blue prints for an ark, and we began wondering if we had enough gopher wood on hand to have it finished before we needed to set sail.

See these puddles of water in this picture? 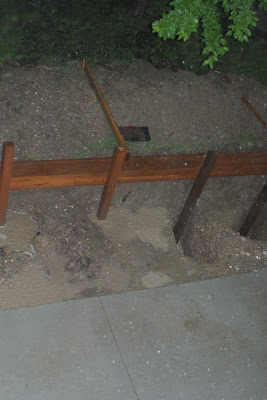 Those are three-foot-deep holes, people.

Holes. Which are three feet deep! Darren dug them with his tractor, and I labored to invent a chorus for a song entitled, “I’ve Got Friends With Big Tractors.”

We didn’t exactly get three feet of water; it was more like three inches. However, we had some massive run-off from our roof because the gutters couldn’t even hold all the water that poured from the heavens, and it all ran into the post holes.

And it’s actually quite difficult to build a retaining wall under water, so Hubs let me have the rest of the day off.

Which meant that I did some laundry.

And then the boy’s baseball game was plum cancelled tonight, although we could never really figure out why, what with the fantastic weather and all.

So, we are going to do what any family does when their post holes are filled to the brim with rainwater and baseball is a no-go.

We’re heading out the door to see Toy Story 3. Just the three of us. And we’re eating popcorn and Kit Kats for dinner at the theater. Because it’s a special night and all.

My parents have been married for 42 years today. Clearly, they were married when Noah was first gathering wood for his little project. And they’re not going to the movie with us; they opted to go eat dinner at a fancy establishment which does not serve popcorn in a bag.

But, what with it being their special night and all, we’re celebrating in our own way, with some quality family time at the theater and some food that will actually be quite low in nutrients.

And the boy, let me tell you, is plum tickled about that.

So there you go, people. This post is up on the blog early tonight, because Hubs and the boy and I are off to see the newest antics of Buzz and Woody, while our post holes try to absorb three-feet of water and dry out.

My job foreman may give me tomorrow off, too!