The boy is blessed with modern conveniences, let me tell you.

One of those is the Slip-and-Slide.

Manufactured in some foreign country and then intricately folded so that it fits into a box the size of a DVD (which you will never be able to replicate at home without the aide of adult beverages, if anyone takes the contraption out of the box), it comes with everything you need to secure it to the ground, hook a hose into it, and have a whirlwind of summer fun when the temperatures ignite themselves to a level commonly referred to as Fire, like they did today.

Sister and I never had a genuine Slip-and-Slide that was made by underpaid workers an ocean away. We had seen them advertised on our one-channel TV during the marathon that was better known as Saturday Morning Cartoons while we ate bowls of Trix cereal, and we wanted one, to the point of begging to be blessed with the awe-inspiring wonderment, but my dad always said, “Put want in one hand, and then spit in the other hand, and see which one fills up faster.”

(Oh, our dad was such a ham. He had all of these sayings, which would cause Sister and me to simply roll our eyeballs heavenward whenever we heard one, but now I seem to be spouting them off to my son on a fairly regular basis, which means that I am officially old enough to have become my parents.)

And do you know what? It really didn’t matter that Sister and I never had the real deal, as far as the Slip-and-Slide goes, because our dad had these enormous rolls of plastic stored in his shop. To this day, I have no idea what they were used for, but Sister and I helped ourselves to a fairly long chunk of one of the rolls, and we cut it off rather crookedly. We were so proud of our ingenuity, until we laid it down on our sloped yard, threw a hose at the top of it, and attempted the slide. (There may have been some pushing and shoving and even some outrageously awful name-calling, as we attempted to determine which one of us would make the maiden voyage on our homemade version of the world’s greatest summer toy.)

To this day, I can’t even remember which one of us won the argument and got to run and launch herself onto the sheet of plastic first, because it really doesn’t matter. What matters is that we suddenly realized that it did not work. At all. And all because we had not factored in the simple fact that the real Slip-and-Slide came with things which would secure it to the ground.

Sister and I called a summit, and the two of us tried to determine what on earth we could possibly use to hold the blasted sheet of plastic in place, since we were a spike-free family.

We raided Dad’s toolbox. We took the biggest and the best screwdrivers. The really long screwdrivers. And we pounded them into the four corners of the plastic sheet with a rather hefty rock, which served its purpose well as a makeshift hammer. We would later be lectured for (1) removing the screwdrivers from Ft. Knox (the toolbox) without a written receipt of permission, (2) damaging the ends of said stolen screwdrivers with a chunk of granite, and (3) exposing the screwdrivers to the element known as water. We would also later be congratulated on our brilliance of replicating a toy which was advertised on TV with our own cleverness and household objects, without spending a single penny. We would also later be handed four nails that were roughly as long as a yardstick, and we were told that we could pound those into the ground and let the sprinkler fall on them until the Rapture.

And, other than the fact that when you slid down it, you had to exit the generic Slip-and-Slide in a big, fat hurry before you reached the very end (because otherwise, you’d take a screwdriver to the side, and after having fourteen bloody canyons gouged into our rib cages, Sister and I learned to control our slides and roll off before we reached the screwdrivers), it was tons of fun.

The likes of which today’s kids do not understand fully.

The boy and our cute neighbor boy both have the real deals. Real Slip-and-Slides with real safety stakes that are approved by every child protection law in America and fully guaranteed not to rip eight pounds of flesh off of a rib cage.

Today, with the mercury screaming up the thermometer until it reached the level of Fire, our cute neighbor boy rang our doorbell and simply asked, “Wanna Slip-and-Slide?”

There was no holding the boy back from this invitation. Regardless of the fact that the cute neighbor boy had already set his own brightly-colored runway of plastic up, the boy was determined to add his own version of the Slip-and-Slide to the fun.

The boys slipped. And they slid. And they screamed with enthusiasm for half of the afternoon. 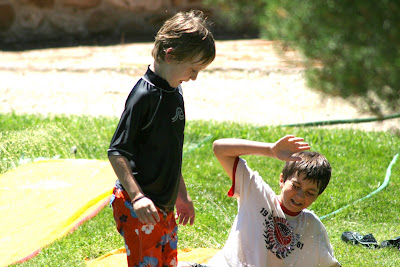 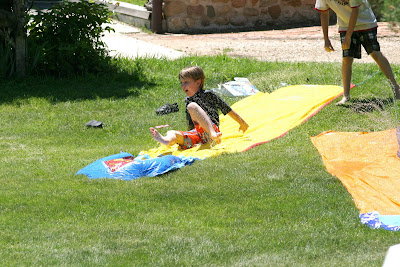 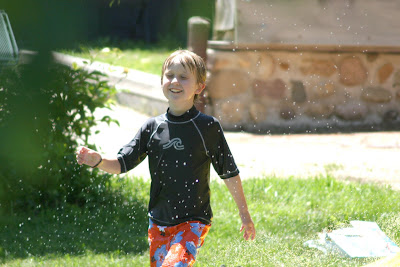 And then they decided to attack the cute neighbor boy’s older brother with water balloons, which, I’m told, didn’t really work out all that great for them. Older brothers (especially those of the high school variety) have a tendency to dominate elementary-school boys when it comes to arm wrestling, shaving, reaching the gas pedal while still seeing over the steering wheel of a car, and water balloons.

The boys had a fantastically wonderful afternoon, and then it was time for Hubs (who is still on his stay-cation this week) and I to take the boy to his swimming lessons.

The swimming lessons which are indoors.

And, what with the temperature being Fire degrees outside, the temperature, poolside, was practically unbearable. I think Hubs and I even talked about why we didn’t simply haul a bench down South and spend an afternoon sitting on the Equator.

Next to a campfire. While drinking jalapeno juice.