I am really liking these Way Back Wednesday posts, because I get to dig through all kinds of photos to make my weekly selection.

And I told Hubs this afternoon, “Listen. You’ve pestered me enough today, so you’ll pay for it dearly tonight. In the blog.”

Hubs gave me his scared face, which is really quite comical and looks like a face that one of the kids in the movie, The Sandlot, would make.

Naturally, I have to be the type of girl who actually backs up my threats, so here it is. 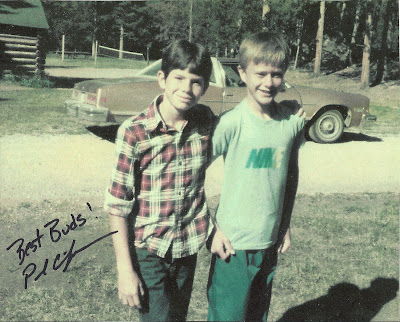 It’s Hubs (on the right) and his best bud, Paul (on the left), when they were at church camp together.

They were both thirteen.

Hubs and Paul were not the biggest linemen on the football team, but they had the most grit and spunk and snarls, and they could both run really fast, and neither one of them knew the definition of the word quit.

And Hubs always enjoyed looking good for the camera, hence his attempt to straighten up his shirt for this picture by pulling the hem of it down. It must have been a cute thirteen-year-old girl who snapped this photograph.

And what kind of car is that in the background? Do they even make cars like that any longer? Did that one come over with the Pilgrims? Oh, Hubs and Paul, the two of you are really quite old.

But you were adorable as thirteen-year-olds.

And whenever I see this picture, I always want to start singing.

“Just two good old boys,
Never meanin’ no harm,
Beats all you never saw,
Been in trouble with the law
Since the day they were born.”

And I would be willing to bet that both of these thirteen-year-old boys could have slid across the hood of that car in the background there and crawled in through the window, just like Bo and Luke used to do. Hubs and Paul would have been huge successes at that event.

But reaching the gas pedal and still being able to see over the steering wheel while they drove? Yeah. Probably not.

2 thoughts on “Way, Waaaayyyy Back Wednesday”