Fifteen years ago today, I got to wear a really sweet dress. I loved it so much, I wanted to wear it a few more times, but I don’t think it was really appropriate, because it was hard to get those puffy sleeves through doorways. 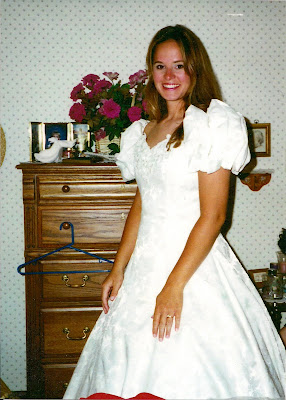 Fifteen years ago last night, my mom and her sister were scrambling around, setting up tables and making sure that all of the tables were adorned with plenty of food, because our families were busy practicing, and everyone needed to be fed, because practicing was hard work. And we all know that hard work makes everyone hungry. 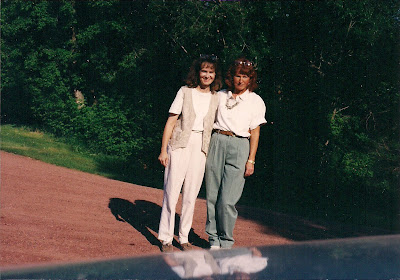 Fifteen years ago last night, my dad and I practiced walking together. Yes, my dad was plenty tough enough to wear a pink shirt. Plenty tough, people. Fifteen years ago today, I had some friends come over. I told them, “Hey, why don’t you all wear similar black cocktail dresses and fix your hair really pretty?”

Fifteen years ago today, my friend, Trish, took me seriously. She got all dolled up, and then she practiced being a perfume bottle model. 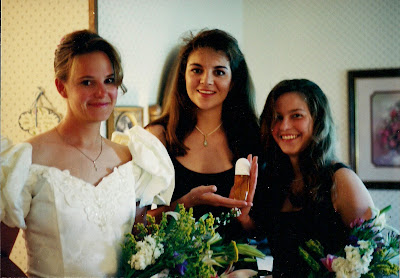 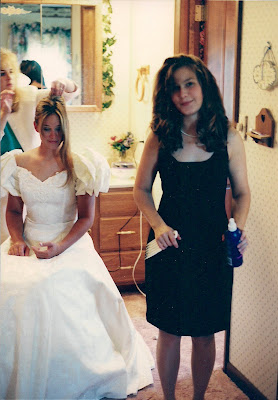 Fifteen years ago today, Hubs actually became Hubs, and he and my dad decided to get dressed up, too. Fifteen years ago today, my dad leaned over to Hubs and whispered, “She has a 1982 Honda Accord, you know. You have to turn the air conditioner and the radio off, if you have any intentions of hitting a speed greater than 40 miles per hour on a hill on the interstate. That car, by the way, is now your responsibility. As soon as you kiss her soundly, I hereby relinquish that car to you, and you will be responsible for dealing with its quirks. Welcome to the family, and that car is going to need a new muffler.” 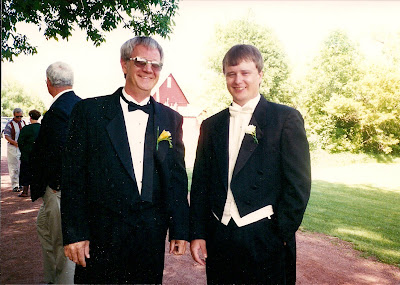 Fifteen years ago today, Hubs and I had some cake. I told Hubs, with grave sincerity, that I would consult the pastor and ask to reverse things, if he smeared that cake into my face, because I did not want any of it falling on my really terrific dress, even though I wasn’t ever going to get to wear it again.

(And, oh my word! Weren’t Hubs and I simply darling fifteen years ago today?!) 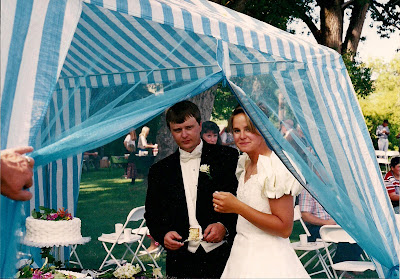 Fifteen years ago today, Hubs…um…well…gee, Hubs! What ARE YOU DOING?! 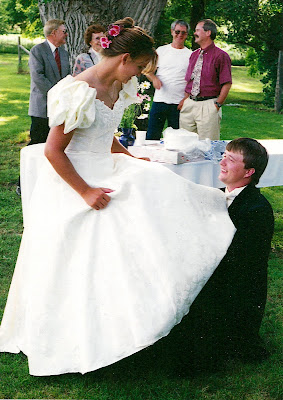 Fifteen years ago today, Sister and I stood with my closest girlfriends, Trish and Theresa, and a little girl named Jenny. We all decided to hold flowers. 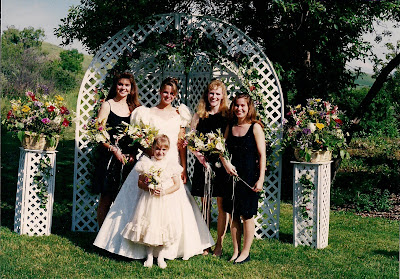 Fifteen years ago today, Hubs and I decided to stand with a pack of guys, too. Jon and Tom (but you can call him Pinhead) are on the end. Fifteen years ago today, they showed people where to sit. Then, that’s Brother on my left, and Hubs on my right. Brother Joel is beside Hubs, and Hubs’ good friend, Jeff, stood on the end. I couldn’t talk these guys into holding flowers, like the girls did. Party poopers. 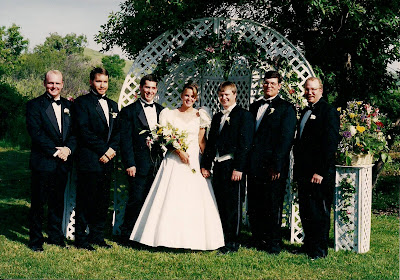 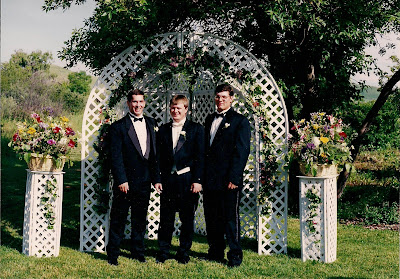 Fifteen years ago today, I said “Cheese” with Trish and Theresa and Sister. I adore this picture, because Trish is busy practicing her hair flip for when she became a famous perfume bottle model. Theresa is busy examining her flowers. Sister is…well…being Sister. Darling girls, aren’t they? 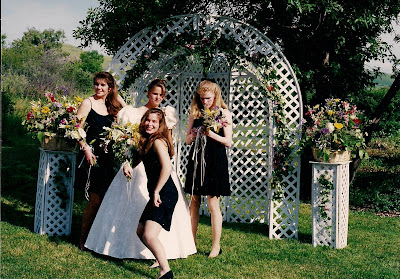 Fifteen years ago today, Theresa and I had a quick squeeze. We held flowers. We had been friends for scads of years. We’d lived together in college. We’d shared our clothes. We’d shared bottles of hairspray. We’d shared stories and double dates and boxes of French fries. It was only fitting that we’d share a special day together. 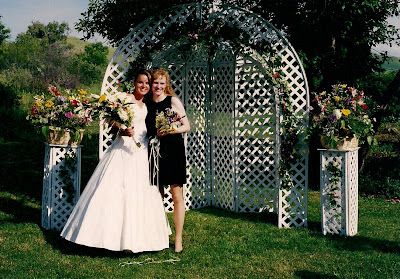 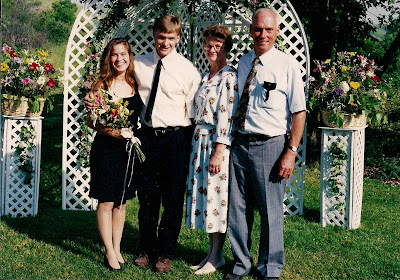 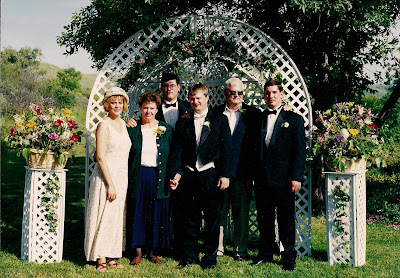 Fifteen years ago today, I changed out of my really fantastic dress and into a dress that wasn’t quite as wonderful, but I still liked it. I also forgot to pack shoes that were actually appropriate for Ensemble Number Two that day. Fifteen years ago today, Hubs looked so stinking hot and tough, I could pinch him, and there’s his brand new bride, looking frumpy in big, clunky shoes only three hours after he acquired her. I never really had any dreams of becoming a famous perfume bottle model.

Fifteen years ago today, Hubs was quite concerned that shaving cream may have been used on his really tough car. Thankfully, Sister and Theresa and Trish were aware of the simple fact that Hubs wouldn’t have hesitated for a single second before he smacked them thoroughly if they used shaving cream on his car. Since none of them wanted a black eye to go with their really great, black cocktail dresses, they refrained from all shaving products. 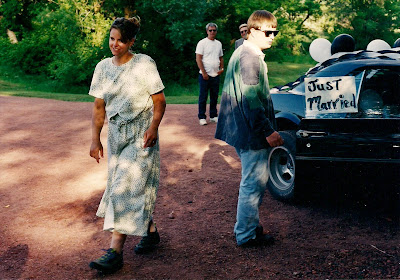 Fifteen years ago today, Hubs and I drove off in his really tough car, which was covered in balloons and streamers, which were strategically taped to his bumpers. As soon as we rounded the corner, Hubs pulled over to the side of the road. I thought that I was going to be kissed soundly there on the roadside, but that was not the case. Hubs hopped out and ripped all the decorations off of his car, and then he patted the hood and said, “There you go, Baby. I got all that horrible gunk off of you.” 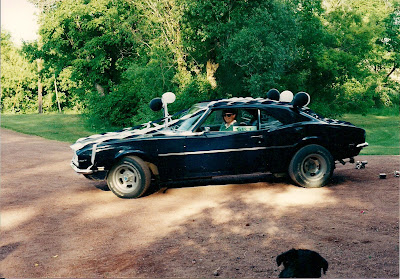 And now, fifteen years later, Hubs and I have been to dinner. We went to a posh little spot, where Hubs said, “Why? Why do they feel the need to give me so many utensils? All I need is one fork and a good steak knife!” We know the chef at the little spot where we went to eat — he’s the dad of the boy’s good buddy, Enzo. And tonight, Enzo’s dad made us some steaks that were cooked so perfectly, I wanted to lick the plate clean in the end, but I figured that doing so would have been a blatant exhibition of poor manners. And also? The grilled asparagus? Oh, people! I wanted to ask for seconds. And thirds. Because the asparagus and I were close friends tonight! And later, our waiter brought out an enormous plate with a giant slab of white chocolate cheesecake on it, and, oh my! There were a couple of candles stuffed into the cheesecake, and Enzo’s dad had written the words “Happy Anniversary” around the edges of the plate in raspberry goodness. And also? Enzo’s dad did not use Cool Whip. Oh, no! He used the real whipping cream! And because of it, Hubs and I gave a solid fifty-seven golden stars for the chef tonight.

Dear Hubs,
It’s been a really terrific fifteen years. You’re my very best friend. You make me laugh, and you only sometimes make me want to scream. You are still a fantastic kisser. You’re a great dad to that little punk we have, and I adore that little punk that we have. You can still open brand new jars of pickles without breaking a sweat. You make me happy. You stay level-headed while I overreact to situations. You’re the strong rock, while I’m the weepy, sobbing mess. You work hard for me and the boy. You set good examples for me and the boy. I love how you rub my neck when we watch movies together. I love how you can always cure my computer when I successfully download a virus. I love how you can always make me see logical solutions to problems, even when I’m crying. I love how you like to set your Coke cans on the kitchen counter right smack above the cupboard that holds the garbage can, instead of actually opening the cupboard and throwing the cans away. And yes, to answer your question from this morning, I really would like to shoot for another fifteen years together. And probably fifteen more after that. I love you tons. Happy anniversary. And you’re still hot!
Love,
Mrs. Hubs

3 thoughts on “It Has Been Fifteen Years”