1. The listing is an easy thing, people. I claim my membership and pay my dues in Nerds R Us, and I am not afraid to stand up and shout out loud, “I love a good list! Especially when the numbers line up nicely on the left hand side of the page. I also like office supplies; paperclips are my favorite.”

2. Admitting the problem is the first step to recovery.

3. You may notice a few changes to the blog tonight. Apparently the website that offered the free background that I was using had some issues, and it posted a little button on my blog which basically said that if I didn’t change my background soon, the situation would be out of my control as of 12:01 Friday morning. This website pretty much threatened me with a giant mushroom cloud, and I could tell that the end was near.

It also told me to “Click here and grab a new background.” I must’ve clicked on it a dozen times, because if there’s one thing I’m not afraid to do, it’s attack a potential virus with a whole lot of mouse smacking. After the little incident which we no longer speak of in our house, during which I lost every single photograph documenting the boy’s kindergarten year, our home computer system is protected from viral outbreaks better than NASA’s are. Hubs and the firewall are tight.

The snapshots of the missing two front teeth? I have one in my possession. And we don’t talk about it.

“Out of commission? How can that be?”

“Free backgrouds do not pay the rent, honey.”

Well then. I dropped that site like a nail-biting habit, and I moved on. The only real problem was that I was drifting around in shark-infested Internet waters without my harpoon of knowledge, so I said to Hubs, “Listen. I may need some help getting a new background on the old blog.”

People, I had to admit defeat, and Hubs simply told me, “It’s relatively simply. It’s just a matter of finding a background that you like and importing all the html code into your blog, so that the browser can read the series of encryption and know exactly what to display.”

At this point, I was so overwhelmed with words like html and code and encryption and browser, Hubs could have just said that my blogging backgrounds were powered by little hamsters running on wheels, and I would have believed him. He lost me at Hello.

So yes. The blog…it is some kind of different this evening, and if it’s not absolutely perfect tonight (like if the words are simply the wrong shade of yellow, which makes them entirely too difficult to read), bear with me. My IT guy is writing html code as we speak, which, apparently is a slow process, but one that is certainly enhanced and kicked into a higher gear when AC/DC blasts out Back In Black from the iPod at volumes that melt speakers into puddles of something resembling chewed Hubba Bubba. In return for this laborious task of creating codes for me, I have offered to continue doing my IT guy’s laundry.

4. After all the code-writing was already begun and part of the newly-decorated blog was displayed, I got an email from my friend, Cody, who stated, “My blog had that same button, so I just clicked on it a couple of times, until I got through (apparently their site was down with all the traffic today), and found the replacement code to safeguard against the removal of my blog background.”

Apparently, Cody is her own IT guy. She may even be able to do a little more with her email account than just checking it, deleting it, and forwarding it.

5. I have finally (FINALLY!) seen the movie Eclipse, as of tonight. (I don’t like to rush into opening weekends or anything.) Hubs and I met Amy and PH at the theater tonight, where we bought copious amounts of sugar-laced soda and butter-drenched corn, and the four of us sat in a theater that smelled like men’s deodorant (Who knows why? I have no idea where the smell came from!), and we took in the latest it movie. Poor Hubs has never read a single word of any of the Twilight books, and the poor man hasn’t seen the other two movies. He went completely blind into the third movie, and he was not happy about it. Basically, the three of us bribed him to join us at the theater. I promised him a jug of Mountain Dew that was the size of a gallon of milk, and then he countered with, “I’ll need my neck rubbed for the entire two-hour film, in order to justify the $8 ticket price.” Done.

PH and Amy and I were a bit excited to see the movie; Hubs said he’d rather walk down the block to the dental office and have his teeth extracted with a rusty pair of pliers, without anesthetic. Sometimes Hubs can be a little dramatic.

In the end, Hubs slumped to one side of his seat and kept whispering endlessly, “Bella needs smacked. She drives me crazy. When is this movie going to end? Why doesn’t someone smack Bella upside the head? Why do some of them have red eyes and some have brown eyes? How much longer until we can get out of here? If I was a werewolf, I’d just smack Bella and be done with it.” Poor Hubs.

In the end, the four of us all agreed on pretty much the same thing: People, this movie was lame. I know that I was supposed to like it. The critics like it. The entire nation likes it. But me? It was just too dramatic. PH commented on the way out of the theater, “They wasted a lot of screen time with all the smooching; the director should have put more fights in when Jasper was a newborn vampire.” And Amy added, “It was all, ‘I love you! No, wait! I love you! But wait! Maybe I love you more!’ I couldn’t take it!”

But…mission accomplished. We saw the current trendy movie, and the general consensus of our group was that it was made specifically for the fourteen-year-old girl crowd.

And Hubs? Well, he said he’d like to sit in the Suburban for a while after the movie was over, and play his Ted Nugent CD really loudly, until the glass windows shattered, just so he could decompress and recover from the flick.

6. Am I on six? I’ve rattled on so much, I don’t even know where I left off. Is this unusual around this blog? Not at all.

7. The boy wrapped up his fly fishing camp today, and he’s all set to don a multi-pocketed fishing vest and walk to Canada to fish its lakes and rivers. Cody went with the group today, and she managed to snag some pictures of the boy in action beyond the cul de sac. Look! He is fly fishing in real water! 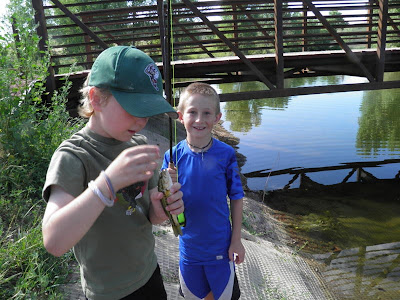 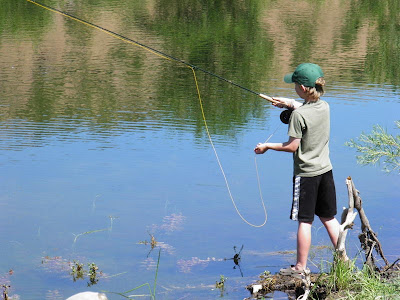 8. And now, while my IT guy sits on my sofa and continues to write html code for me (I type that phrase like I know exactly what it means!), I am going to head to bed. The wind in Small Town, USA decided to blow around the midnight hour last night. And really, people, when I say the words decided to blow, I mean that we actually feared that our trampoline was about to become nothing more than an old memory of summertime fun, and that maybe we were about to become victims of The Perfect Storm — The Land Version. And really? Wind like that in the middle of the night equals lost sleep.

10. And hopefully, by the end of the weekend, my IT guy will have gotten this blog back to sweet perfection. Either that, or he’s going to be washing his own socks and jeans.