Over the weekend, while I was driving the Suburban to one of the umpteen thousand places that a mother of a nine-year-old might drive to, I managed to smack the buttons on the stereo a couple of times and completely eject the Ted Nugent CD which Hubs had crammed in there a couple of weeks ago.

Rest assured, you can only hear “Wango Tango” so many times before you want to rip your own fingernails out with tweezers, just to transfer the pain in your ears to a new location. Next to Uncle Ted’s screaming guitar and lyrics, I actually find Johnny Cash soothing.

And that’s saying something, because usually old John and I don’t see eye to eye in the music industry at all.

As soon as I’d managed to get Ted’s CD out of the stereo, I heard the strains of an old friend.

I think the last time I heard this song, I was wearing a neon green shirt and a pair of Guess overalls, and it was probably being played from a cassette tape.

And yes, I did indeed say the word cassette. Remember those? Little plastic rectangular things? With forty-seven miles of brown tape wrapped up inside of them? Notoriously famous for getting said tape ensnared in the stereo of your 1982 Honda Accord? And remember how you could never get to the song that you wanted, without hitting rewind and play twenty-six times, just so you’d perfectly hit the very first note of the song you wanted to hear?

Yeah, I barely remember them, either.

Yes, it had been a while since I’d heard “Hello,” but I was so pleased to discover that I still knew all the words, I simply couldn’t resist singing it out loud with Lionel.

Hello, is it me you’re looking for?
‘Cause I wonder where you are,
And I wonder what you do;
Are you somewhere feeling lonely,
Or is someone loving you?
Tell me how to win your heart
For I haven’t got a clue,
But let me start by saying, “I love you.”

I’m glad that I was alone in the Suburban, belting out the lyrics with Lionel, because this is one of those songs that takes poor Hubs right to the edge of Cliff Fingernails On the Chalkboard and shoves him right over. He would have mocked my song, and turned the station to talk radio.

Air Supply’s “Making Love Out of Nothing At All” will do it to him, too. So will Rick Springfield. If someone isn’t thrashing all over the stage floor, making a guitar scream like a banshee, and if speakers haven’t caught fire, then Hubs doesn’t consider it to be good music.

Lionel and I had a happy walk together down the road of memories, and I felt relieved to realize that I no longer needed to have this song around on a break-up tape.

You all know the break-up tapes. The mixed cassettes that you spent hours making, by recording songs off the radio? They were always full of sad, sappy songs. Every girl had one, whether she’d endured a break-up or not. (And 89% of the songs on the break-up tape had the DJ talking through the first part. Why on earth couldn’t DJs from the ’80s realize that they needed to be quiet the very moment a song started up, because some 17-year-old girl might have just hit record on her stereo to catch the little ballad on a Memorex?)

I have another walk down the road of memories tonight, too, and I have pictures! I may get hit in the head with a swinging broom after this post goes public on the World Wide Web, but it’s a risk that I am genuinely ready to take.

My friends, Jodi and Cody, had back-to-back birthdays this weekend. (Are there any names that are cuter to say together than Jodi and Cody? Well, other than a set of twins who attended elementary school with us. They were a couple of years older than I was — and probably still are, for that matter. Their names were Jerry and Larry. Those names rocked the fancy moniker contest, too.)

But seriously, it only took a couple of phone calls to husbands, and I had what I wanted.

May I present Jodi, all dolled up and clearly ready to cut a rug at the prom? 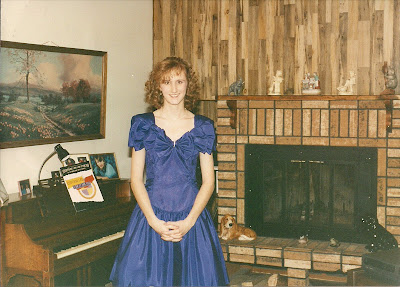 I’m so glad you got to wear deep blue to your prom, dear. When I went to prom (which was what? Three years ago now?), our colors consisted of the entire pastel color wheel. Peach. Soft pink. Pale yellow. Baby blue. And we had sleeves on our dresses that make these sleeves of yours look plum puny. The skirts were so ballooned out on our prom dresses, we had to smack them down whenever we sat in chairs, just so we could see over the tops of them.

And let me guess? You and the spiral curling iron were good friends that night, weren’t you? And it took about ninety minutes to get those curls done like that, didn’t it?

I know this, because I’ve been there. Of course, I had the spiral perm, which definitely helped things along. (And also? As a side note? Don’t ever put the spiral perm in your bangs. It won’t turn out anything like you had hoped for, and your bangs will shrink up in tight curls that are exactly three-fourths of an inch long. I can give you this advice, because I once lived it.)

But seriously, Jodi, you look exactly the same. Still cute as a bug. Downright beautiful.

And this is exactly how the phone conversation went down with Gabe, when I tried to get this picture.

And Gabe said to me, “What do you want to ask me about your retaining wall?”

And I said, “Nothing! I just want you to pretend that I’m asking about a retaining wall, but I really just want a picture of Jodi. Do you have an old, goofy picture of her somewhere?”

And Gabe said, “But what do you need to know about the retaining wall?”

When he finally caught on, let me tell you: He had it! Retaining wall questions were just pretend!

He did a fantastic job on his photo hunt!

And then, can we just stop and look at this little number, which we’ll label as Exhibit B? Kind of cute, wasn’t she? This is Cody, in 1962. 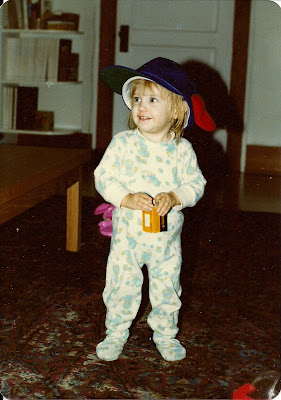 But the real gem that I managed to snag, through the help of your dear husband, is this one.

Honey, let’s talk about the hair. I simply have no words for it. I think, had we known each other in — what is this? 1972? — I would have had hair envy. This is the most glorious mane of tresses I’ve seen since Julia Roberts was Vivian Ward in Pretty Woman.

And the glasses? Well, I’m pretty sure I had the exact same pair. In red.

And the shoulder pads? I can just hear Joan Collins and Linda Evans and the rest of the Dynasty crew gasping with delight.

And also? When your hair looks this fabulous, and when your shoulders are this big, you should really try to open your eyes just a touch more.

Unless you were at, say a Rodney Atkins concert like some people were on Saturday night, and you were enduring the rapid fire of a strobe light, and you felt a good, solid strobe-induced seizure working up. Then I guess you could squint a little.

And I’d like to tell you that when I talked to Jeffrey on the phone about snagging some old pictures of you, I told him, “Listen. When you have the goods, just call me and I can make an impromptu visit at your house to pick the old picture up. I’ll bring over a book of Cody’s that I have to return, and then you can quietly slip me the photo.” So imagine my shock when YOU texted me and said, “Jeff says you have a book to return???”

I don’t see Navy SEAL as a job in his future. Something about stealth there. I was just relieved that you didn’t say, “When did you run into Jeff? And why is he all worked up about you returning a book to me?” Yeah. It was supposed to be my reason for dropping by your house; it wasn’t supposed to be his code word, fired off through you, to let me know that Elvis was in the building.

Clearly, both of your husbands need some help in the areas of spying and espionage. 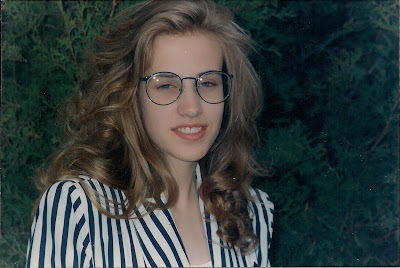 At any rate, happy birthday, girls. You’re both stellar and precious.

If you’ll excuse me now, I need to go find some old Lionel Richie songs to add to my iPod.

Because cassette tapes went out style with those shoulder pads and that prom gown.

2 thoughts on “Why Isn’t Lionel Richie Burning Up the Radio Waves Any Longer?”