These three little punks piled into my Suburban tonight, because they were all headed to Vacation Bible School at our church, and none of them are actually tall enough to drive. Oh, they are quite capable of driving, with some ingenuity and cleverness, because one of them would have to scootch clear down to work the gas pedal and the brake, while the other one did the steering. Clearly that leaves the third fellow to twist the dial on the Suburban’s stereo and hang his head out the passenger window to shout phrases like, “Hey! We’ll take six cheeseburgers and three chocolate shakes, please.”

These three? Well, it’s the boy and Enzo and Carter, and they are a pack of trouble, let me assure you.

A pack of trouble, and one-third of them is in dire need of a haircut. 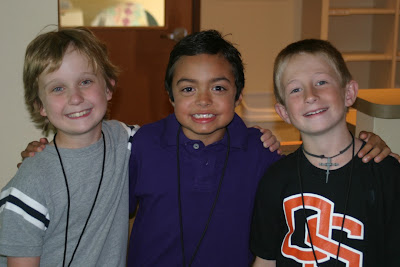 Everyone who was anyone came out to the church tonight for a High Seas Adventure (our theme) with VBS.

My niece, Miss L was there. And she smiled sweetly for the camera. Stinking cute, isn’t she? 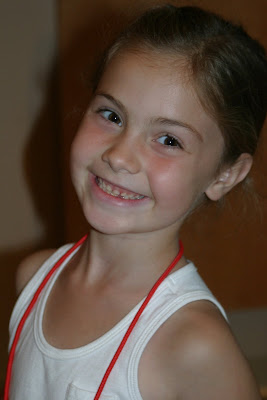 My nephew, K, was there, too. He also smiled sweetly for the camera, after being bribed. He knows how to work things to his advantage and score stuff like Hershey’s kisses. 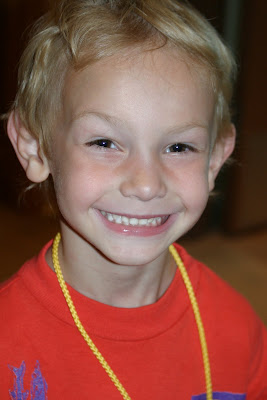 The boy’s good friend, Gage, was there, too. These two punks have been terrific friends since the very minute Gage was born. The boy was exactly, to the day, fourteen months older than Gage when he arrived in this world, and he kept saying, “Bay-bee! Bay-bee!” over and over at the hospital when we visited. Gage belongs to my good friend, Christy. Clearly, you can see that he is no longer a bay-bee. 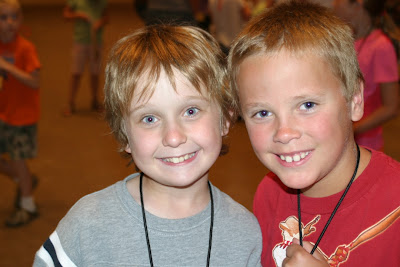 Amy’s little darlings were at VBS, too. Aren’t they cute? And aren’t they sweet? After dealing with small boys running around my house all the time, I need to catch up on some doses of sugar and spices. 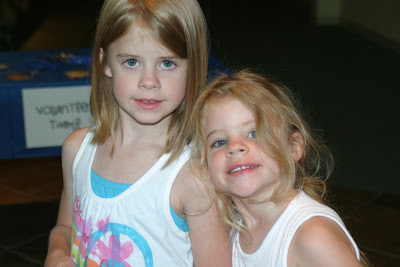 Oh! And look! My friend, Stephanie, was at VBS, too! Of course, had I been a better photographer, I could have taken a clear snapshot of Steph, but no matter. She’s beautiful enough to rock a blurry picture any day of the week. And did I mention? She’s a fan of Beth Moore, which is probably why I love her so much. She can also sing. And when I say that Stephanie can sing, I mean this: She makes Travis Cottrell sound a little off-key, and that’s certainly saying something. Tonight, when we picked the kiddos up from VBS, Stephanie and I got in on the tail-end of the singing time. Rest assured, I do not sing when I am standing next to this darling woman, because then I sound even worse than I normally do when I belt out a round of lyrics. 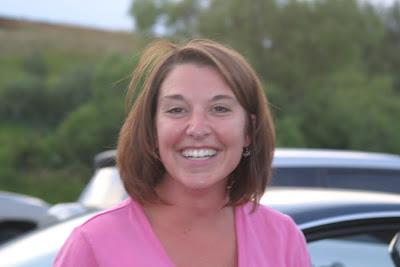 And look here! Even more grown-up girls! It’s Cathy and Kim and Mika and Christy, and after we all pushed our small fries into the church’s sanctuary to get VBS started, we all hung out in the foyer, talking, because, according to Hubs, that’s all girls ever do. We talk. And we talk. And that’s okay. (And, for the record, I used to covet that orange purse of Christy’s until I got my own. But mine is red. And now I don’t covet her purse any longer, which is really great, because coveting is…well…a sin.) 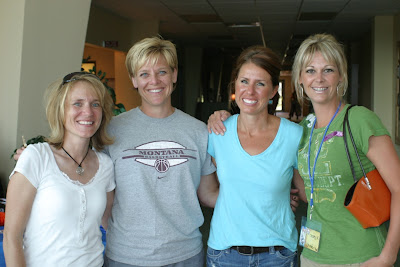 And look at this one! It’s Christy and Sister. Aren’t they cute? Sister, by the way, ran half of a marathon this weekend, which is exactly thirteen miles more than I can run. Just hearing about people running half of a marathon wears me out and makes me reach for a bottle of Gatorade and a gym towel to wipe my forehead with. Way to go, Sister. Your marathon legs look even better than Christy’s orange purse does. 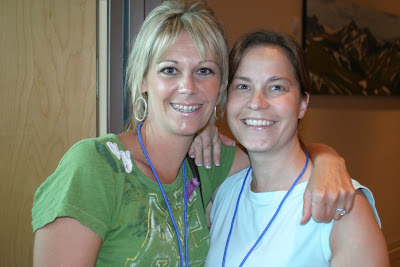 And here’s Christy and Abbey. (Yes, Christy was hopping in all of my snapshots tonight, but it’s perfectly fine, because she was sporting a Great Hair Day.) Abbey is wearing a microphone on her cheek, because Abbey had some singing to do. Abbey and Stephanie can both sing. I don’t stand next to either one of them during praise time, because then the fact that I sound like a dying frog when I sing is made all the more evident.

But really, people, I have other spiritual gifts than singing. Typing, mostly. I may have mentioned that before. 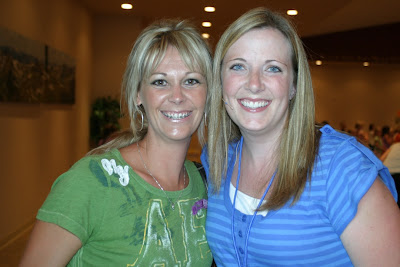 After hanging out at the church and talking with all the grown-up girls and taking everyone’s pictures, I did head back home to collect Hubs. Hubs knew better than to come to the church with me when I dropped the boy and Carter and Enzo off for VBS, because Hubs knew that I would spend some quality time talking. And Hubs’ Navy SEAL-ness makes him the type of fellow who likes to get into a place and get out right-quick. His philosophy is simply this: Stopping to talk can get you killed when you’re a SEAL. You move in, you rescue the good guys, you move out. Nobody stops to talk, and everyone gets out alive.

I might have mentioned that Hubs tends to be a bit dramatic sometimes.

And I’d like to say that Hubs and I went out for a romantic dinner over candlelight while the boy was having a High Seas Adventure at VBS tonight, but the honest truth is this: Hubs and I went to the major discount shopping center for the Big Haul of Groceries tonight. The BHG needed to happen, because our kitchen looked a whole lot like Old Mother Hubbard’s place, just without the Dr. Scholl’s flooring. So we shopped for groceries. And we piled our cart high. And we piled it higher. And then it sort of turned into a game of Jenga, where we tried to balance everything in the cart and not let it fall out.

And do you know what? The major shopping center was completely out of bananas tonight, which made me break out into a little song and dance routine while I was pushing my cart. I started serenading Hubs as we were shopping.

I don’t sing often in shopping centers (it’s the whole can’t-carry-a-tune-in-a-wheelbarrow fact of life), but when I do, I like to sing great songs.

And, Amy, he likes us even if we have lasagna slopped down the front of our shirt.

1 thought on “Yes, They Had No Bananas Today”