…the boy got his fedora while we were in Bigger Town on Tuesday.

He loves it. I think he looks a little Al-Capone-like. 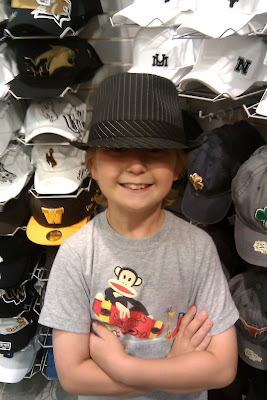 In other news, we pulled off another Girls’ Night at the Cinema this evening, as we all crowded in to see Charlie St. Cloud.

Stephanie V. kept warning me that it was sad — that it was really sad! — as she’d already seen it once and had joined us for Round Two tonight. (Really, she was just there for the bag of popcorn, which she completely ruined with a jug of orange powder that was the equivalent of pouring a packet of dry Kraft Mac and Cheese powder all over the corn. That little packet of orange dust has its benefits over hot noodles, but it looses something on the corn, people.) I tried, with everything I had, to work up a good dose of tears during the movie, and I really sort of thought, before the show began, that I’d be able to accomplish it with ease, what with the PMS hitting me hard this week and dragging a full round of emotional warfare with it, but the tears were simply a no-go. I even tried to work up some sympathy tears, while Cody bawled and Stephie V. sobbed like she was at the airport, saying good-bye to someone forever (even though it was Round Two for her with the film). I had nothing. I felt like a Charlie St. Cloud Movie Loser, but that only lasted until we were walking out of the theater, and Amy, who had been a few seats down from me, announced, “Dang. I didn’t shed a tear! Couldn’t even work one up.”

My Siamese twin, separated at birth.

The only real tears that poured down my cheeks this evening were those of outright laughter, when Stephie V. flipped the lid off her drink, dropped it into her lap, and experienced ice cubes in strange places. The PMS may be working in reverse tonight.

And then I came home to a house that smelled like a Texas BBQ, as Hubs was experimenting in the kitchen. He and Sister’s Husband are going to roast a pig this weekend, regardless of what PETA will think of them, and Hubs was boiling up a sauce on the stove top. He called it his Test Run.

My entire house smells like I should be able to walk up to the counter and order a pork sampler plate with a slab of cornbread tucked along the side.