I am, without a doubt, the most UN-crafty person I know.

In fact, I think I’d rather scrub public bathrooms at a rest stop along the interstate than tackle a craft project. At least I know that I’m good at scrubbing sinks, and I seem to fail miserably with bow-tying and adding embellishments and smearing paint around.

Hubs’ mother gave me an old picture frame quite a stretch of time ago, which she said was from the 1920s.

Clearly, older than I am.

This picture frame was actually pretty terrific, as it was covered in plaster with intricate scroll work all over it. I was pretty sure that, with a little love and attention (much like Charlie Brown’s Christmas tree), the frame could become something pretty great, so I stuffed it into my closet and waited for inspiration to strike.

Waiting for inspiration to strike me is like wandering in the desert for forty years. It’s going to be a long time, and I’ll probably end up with sand in my shoes as I wonder how on earth I can prepare the next manna meal with less than five ingredients.

This poor frame collected some dust in the closet. It fell over a couple of times, when the obnoxious cats chased one another through the closet. I may or may not have draped some dirty clothes over it more than once.

But then, a few weeks ago, the boy and I were in Home Depot, and we happened, quite by accident, to walk past the paint cards, and there! There it was! A shade of blue that sang to me and called my name.

I showed the paint card to the boy, and I pointed out the spectacular blue, and I said, “Isn’t this great?” And he said, “Sure. It’s just blue.” I fear that my son is destined to live in an apartment one day with nothing but white walls and furniture built out of Lego bricks and dirty dishes in his bed.

I threw the paint card down on the counter and said to the teenager there, “I need some of this.” He measured, he mixed, and he handed me a little container filled with paint. I brought it home, sat it on the kitchen counter, and threatened to physically dismember anyone who knocked it off and spilled blue paint on my hardwood floors. That would would have been nothing short of a major catastrophe!

The paint can sat on the counter for a solid two weeks, until Hubs asked, quite casually, “What are we doing with the blue?” This was to be translated like this: “If I ripped a transmission out of a ’68 Camaro and dumped it on the kitchen counter and let it sit there, you would skin me twelve minutes later, and yet this can of paint hasn’t moved for days. Days that have now become weeks. So, unless you want to just keep your lips sealed shut when the grease and the bolts show up in your kitchen sink, while I rebuild a transmission sometime, you’d better figure out what you’re going to do with this paint, and then you’d probably better get it done.”

I gave Hubs a look. It was the look which could be translated like this: “I do not mind going toe-to-toe with you right now at all. I won’t even need a power bar to smack you into Crazyville.”

Oh, Hubs and I talk tough, but only I have what it takes to back the tough talk up.

(And also? While we’re on the subject of talking tough? People, listen to this. The boy and the cute neighbor boy were riding in my Suburban today, when they started talking about a girl who was getting on their nerves. I jokingly said, with a big laugh, “Did you beat her up?” My boy responded by saying, “No, Mom. Dad said that there is never a good enough excuse to hit a girl. He told me that he doesn’t care if a girl beats me to a pulp; I don’t get to hit her back.” Way to go, Hubs! You have some very fine parenting skills! And then, to finish up the conversation, that cute neighbor boy of ours said, “Well, your dad’s right. You should never, ever hit a girl, but if a girl gets on your nerves a lot, I guess it would maybe be okay to just slap her once. A slap isn’t the same as a hit.” Clearly, the neighbor mama and I need to talk!)

But really? Hubs was right. The blue paint needed to be moved off of our kitchen counter. I was still a little nervous that he wasn’t joking about bringing in a ’68 transmission to rebuild.

So, I hauled this little number out of our bedroom closet: 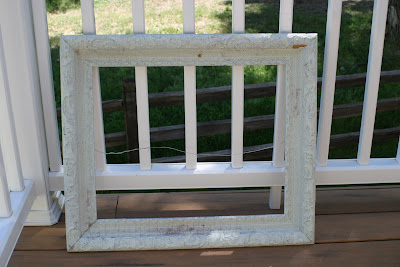 And then I recruited Hubs (who sighed and said, “Why? Why am I always sucked into your little projects?”) to have a chunk of tin cut for me, and then I asked him to do some spray painting.

Hubs is the Grand Master Spray Painter. He took his little part of the project out back, into the weedy area (Oh, who am I kidding? Our entire backyard is nothing but a weedy area!), and he sprayed that slice of tin, good and proper.

I stood nearby and commented, with a little dramatic flair, “Good grief! It stinks! I can’t believe how BAD spray paint smells!”

To this, Hubs replied, “Spray paint is one of the most beautiful smells on the planet. In fact, I wish someone would manufacture a cologne for men that was a mixture of spray paint fumes, fireworks, and bacon. Those are the three best smells there are.”

People, you can’t have this man. He’s all mine.

I think it’s safe to say that the spray painting was flawless. Smooth. Sweet perfection. And then, in my total impatience to see if it was dry, I stuck my thumb on it. Right in the middle. And it wasn’t dry. And Hubs rolled his eyeballs at me. I said, “Oh, it doesn’t matter; it’s just one little blemish. Forget about it.”

Only the blemish kept Hubs awake that night, because he insists that nothing he has spray painted will be less than art-show worthy. He hauled out some fine-grade sandpaper the next day. He did a little sanding. And he followed that up with a little RE-spray-painting.

Naturally, it turned out perfectly. Hubs would have it no other way. 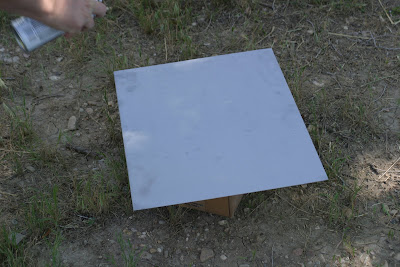 Meanwhile, I used that fabulous blue, and I painted the frame. And then Hubs and I combined our two painted projects into one fantastic chalkboard!

Hubs hung it in our living room, and I envisioned it as being the family message board, where we’d write sweet notes to one another, or Bible verses, or inspirational words. 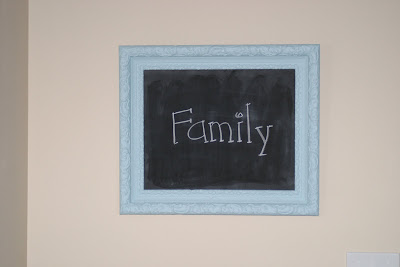 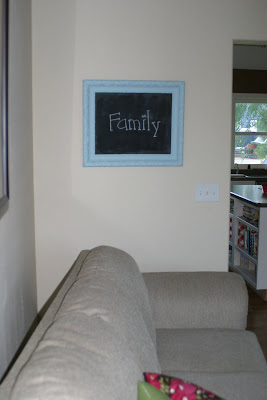 The word FAMILY lasted on the new chalkboard for exactly one hour. One hour after our new and glorious chalkboard had been hung on the wall, the boy came in our back door. He’d been at the cute neighbor boy’s house, swimming. I’m convinced that our boy is shriveling up into raisin status, with all the time he spends in the neighbors’ pool.

As soon as he saw the chalkboard, he yelled out, “SA-WEET!!!”

And he stole some chalk from me.

And he pushed the sofa two feet closer to the wall, so that he could stand on the sofa’s arm and reach said chalkboard.

And he decorated it completely with chalk drawings of skulls and crossbones.

I erase that chalkboard all the time, and I write nice words on it.

And every single day, when I happen to sit down on one of the sofas in our living room, I look up, and I see skulls. And I see Egyptian mummies. And I see horned creatures with fire coming out of their fanged mouths. And I see dragons. And I see bloody battle scenes, with chalk images of bodies that have been struck down with chalk-drawn swords.

Yes, the boy loves our new chalkboard, but for reasons entirely different than what I had envisioned it for.