Yoda Joe, the whining frog from the tropics, who is fully capable of finding a job as a ventriloquist with a black Lab puppet on his lap, continued to call out to his lady friends again last night.

The lady friends that he’s never met. The ones he’s quite certain he’d like to meet. His frat tank was participating in rush week, and he just wanted to know what the sorority frogs were up to. And if he could buy them a cricket or two.

Even though I threatened to do it, I couldn’t bring myself to actually squash him with my boot last night. Clearly, I’m all talk. I just didn’t know how I’d face the boy this morning and say, “Yoda Joe passed quietly in his sleep last night. He’s gone to meet Jesus now.”

Today, the boy and I had to venture into the pet store to buy LIVE FOOD for Yoda Joe and Gru, because, apparently, frogs are not satisfied with some apple peels and carrot shavings. Apparently, they want their dinners to be a bit more lively, and I will just say right now, I am not a fan of this.

It’s in my life contract that I do not feed live things to live things.

And the pet store? Oh, people. The odors emanating from the front door are just ten kinds of awful, and…AND!…there’s a Columbian Python (I read the sign) in a cage smack by the front door, who is rather inclined to lift his head from time to time and STARE at me. I felt like Mowgli, when Kaa looked into his eyes.

It also seems completely wrong that the Columbian Python’s glass tank sits on top of the chinchilla cage.

But, if the snake doesn’t kill me in the pet store when the boy and I venture in for crickets, the odor will knock me flat out. At the cash register, there’s an entire display case of candles and sprays that say, “Completely Neutralizes and Eliminates Pet Odors.”

Dear Small Town Pet Store,
Let’s be for lighting about thirty of those candles there at the cash register, and let’s get a little trigger-happy with the spray bottles, m’kay?
Thank you.
Jedi Mama

We bought the crickets today, which is to say that the boy bought the crickets. I refused to look at the little bugs, knowing that they were destined for a stomach in a matter of minutes, and the boy dumped them all into Yoda Joe’s and Gru’s tanks.

As soon as he flipped the hatch on Gru’s tank, Gru exited his tank. Gru is a bona fide wild frog, who was caught along a creek bed by the boy and his friend, G. He has escaped garter snakes, owls and prowling house cats. He’s not at all happy with his confinement at the Jedi Manor, and has asked that his lawyer file an appeal for his wrongful incarceration. Gru’s favorite spot to sit is on the faux rock in his tank, where he has been formulating an escape plan for days now, and he fully executed it today. The boy flipped the lid; Gru jumped straight out of the tank, landed on the floor, and took off.

Even the cats jumped back in shock.

Naturally, the boy squealed and gave chase, and good old Gru hopped and twisted and fought back for five minutes before he made the error of jumping into a corner.

Trapped. That’s what he was. And now he’s back in the tank, sitting on the rock, planning his next escape, but at least his belly is full of four crickets.

The fifth one drowned in his water, and he turned his snobby little nose up at it. Wild or not, apparently Gru’s palate doesn’t take a liking to dinner if it’s floating.

Yoda Joe, having been born as a tadpole in captivity, has no idea that a life beyond the walls of the tank exists, so when the boy flips his lid up to toss in the crickets, he just sits there, waiting for the cafeteria to serve up the grub.

In other news, the boy had his first football game of the season tonight, and I really wish that it could have been just a little bit warmer for the game.

I’m just going to go ahead and speak the truth. The temperatures at the game tonight blew straight up from the furnaces of hell. I had sweat running in places where ladies don’t usually sweat, and I told Hubs at halftime, “Listen. We’re going home to eat ice for dinner.”

The boy’s team is the Broncos, which pleased Hubs to no end. Hubs and the Broncos — they are friends. Regardless of the heat, the little Broncos gave it all they had tonight. By the time the game wrapped up, they were all stripping jerseys and shirts off right and left, and their coach had to stop them at their shorts. There would be no walking around on the football field in nothing but the boxers!

Check out the $30 football gloves. Tebow has nothing on the boy. Nothing, I say. That boy of ours can rock a pair of athletic gloves better than the pros can. 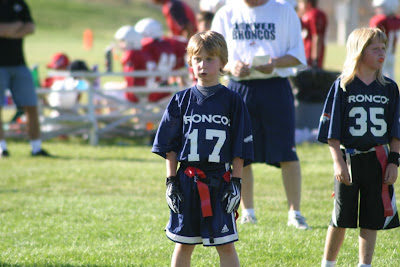 My little friend, Anna, did some cheering on the sidelines. Anna’s older brother, Seth, played on the opposing team, but Anna didn’t care. She’s been taught by her daddy to dig the Broncos (the real Broncos!), so she spent the entire evening shouting out, “Go, Broncos! Go, Broncos!” Hubs and I were very pleased with her choice of cheers, regardless of the fact that Seth was not. 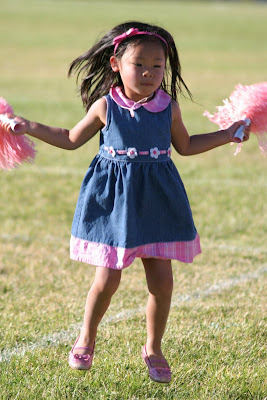 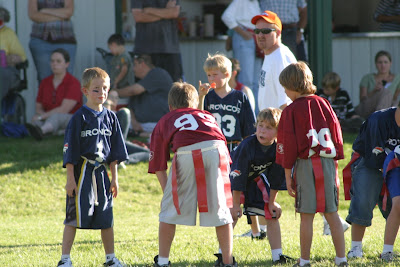 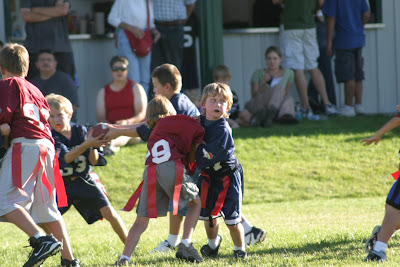 Seth is #99, and we had to laugh, because the boy was paired up with him in the line tonight. Seth and the boy have been good buddies since they were four and five months old. Seth is exactly four weeks older than the boy. He is, however, about eight inches taller than the boy, and he weighs about 45 pounds more than the boy does. Seth was born to play some football!

The blocking that took place tonight? Yeah. It was a little one-sided, but Hubs and I just cheered with Anna. “Go, Broncos! Go, Broncos!” 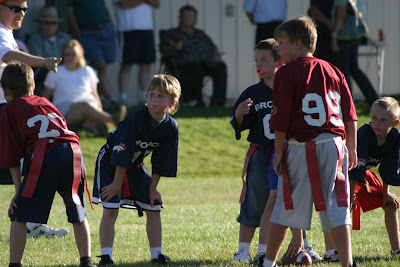 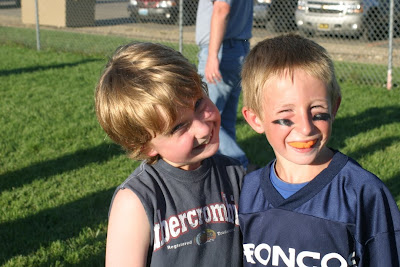 After the game, we peeled our sweaty selves out of the bleachers and talked of nothing except the joy we felt as we anticipated the cold winter months to hit.

And then we had ice for dinner.

I mean, ice cream, courtesy of the Dairy Queen.