On Friday, because we simply couldn’t stay away, the boy and I went to Bigger Town with my mom. For the second time this week. Because apparently two-hour car rides do not intimidate me.

The boy packed his backpack with all the essentials that he’d need in the Suburban on the drive to Bigger Town — his iPod, headphones, a book (because his mama made him bring one), and the Nintendo (in case there wasn’t a big enough game selection on the iPod). As he was piling into the Suburban, the boy turned to look at me and said, “I just want to let you know one thing, Mom. I love you. And I’m not trying on any more clothes in Bigger Town on this trip.”

Clearly, we need to work on his math skills, because I think that was two things that he told me, actually.

In reply, I looked at the boy and said, “Honey, Mama’s not really sure that I have what it takes to endure another fitting room with you and a stack of jeans in this decade anyway, so really? You’re home free.”

The boy was glad that we understood one another.

Our first stop of the day, though, was to a major sporting goods store, and we hiked back to the fishing gear. As a complete surprise to the boy, Pa had called ahead to the store, and a fishing rod and reel were waiting for him at the counter. The boy was mesmerized by it, and he could not stop smiling. Pa announced later that evening, “Well, I thought my fishing buddy could use a decent rod.” Mam and I joked that the boy should have tried his new pole out in the live fish tank at the back of the store, where the trout that swim there are actually bigger than Cat 1 and Cat 2. 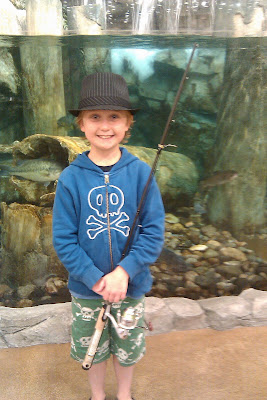 Mam and I accomplished some serious power shopping, and then we were back on the road to Small Town, USA.

On Saturday, the boy and Pa went fishing, and the boy caught five fish. His excitement level was just beneath Christmas and The Fourth of July.

Our church had been planning a special outdoor service and pig roast for today for the last month, and Hubs and Sister’s Husband were the chefs. Or the pig grillers. Whatever. Sister’s Husband built himself a barbecue on a trailer a few years ago, which is big enough to roast a small brontosaurus in, and our pastors recruited him to just go on ahead and park it at the church. Hubs and Sister’s Husband recruited their friends, Gabe and Brad, to help be pig grillers, and, for the last week, the four of them have been whipping up different barbecue sauces in their kitchens.

I think that it is safe to say that the entire Southern United States was represented in sauces today up here in Yankeeville. And also? I have learned that there are not enough Scentsy pots in existence to obliterate the sauce smell out of my kitchen at home.

Oh, Ketchup and Garlic and Vinegar, your lingering smells are driving me batty.

At 4:00 yesterday afternoon, Hubs dashed out to the church to help set up giant tents, so that the outdoor service this morning could be a comfortable reality. If we can’t sit in the sanctuary in August and enjoy the A/C, then at least we didn’t have to sit in the direct sunshine!

Hubs returned home at 6:00 last night, and quickly did a Google search with these words: How Long to Roast a Pig. He began printing numerous pages, and I quietly asked him, “Um, shouldn’t you have done that search, you know, several days ago?” Hubs said, “Hey, this isn’t our first rodeo; we know what we’re doing!”

And then he added, “This person’s recipe calls for cooking a 15-pound piglet for four hours; our pig weighed 200 pounds. If we just add 18% more hickory briquettes, factor in the wind speed of breezy and turn the trailer and pig roaster 9 degrees to the west to accommodate the wind, we should have this pig completely cooked by noon tomorrow.”

Hubs and Sister’s Husband had a plan, which involved heating the briquettes up at 7:00 PM Saturday night, putting the 200-pound pig in to cook at 8:00 PM, and then taking shifts with Brad and Gabe, so that one of them was always on Roast Duty, while the other three were at home, sleeping.

At 7:00 last night, Hubs kissed me good-bye, as he called out, “I’m like Jack Bauer again! My cell phone is dead and charging, so I’ve gone dark! Call Sister’s Husband’s phone, if you need me! I am, for now, completely untraceable!”

At 8:45 last night, Hubs dashed in our front door and grabbed his phone, which was fully charged by then. He waved good-bye eighteen seconds later and said, “This pig is going to turn out really nice! I want the camera from my phone to take pictures of it!”

That was the last I heard from Hubs, until 9:00 this morning!

So much for the Roast Duty shifts. Hubs and Sister’s Husband sat at the church all night long, with Gabe and Brad at their sides, and they apparently had a fabulous time. Brad brought tamales for everyone as a midnight snack, which Hubs said were good enough to make grown men weep with happiness. At 3:00 this morning, they reported that a bobcat apparently snagged a duck at the creek, because oh! my! lands! The screeching and the flapping and the death cry were enough to send the hairs up on the backs of everyone’s necks. When I asked the boys what they talked about all night, Hubs responded, “Oh, you know. Food. Hunting. Football. Hockey.”

When Hubs came home at 9:00 this morning to shower, he flapped his sweatshirt at me and yelled out, “Smell this! It’s fantastic! All it needs is a few spray paint fumes added to the mixture of hickory smoke and pig, and then it would be the most perfect cologne on the planet!”

Cat 1 and Cat 2 seemed to agree with him, as they both buried their noses in his sweatshirt after he threw it onto the floor, and purred with pleasure. They were drunk on the roasted pig smells, and happier than a couple of kitties who had found the catnip stash.

My only regret is that I have plum taken this man off the market, as he’s happily married to me now. It just seems unfair that no other women will get the pleasure of leaning in next to him and inhaling his homemade cologne (Er…toilet water!).

Yes, the roasted pig turned out fabulously well. There had been no doubt that it would be so, with this crew of grillers. 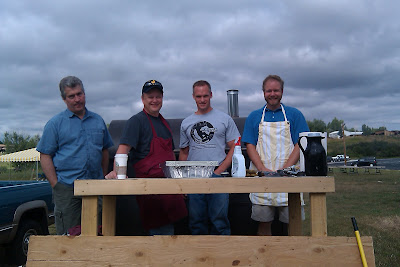 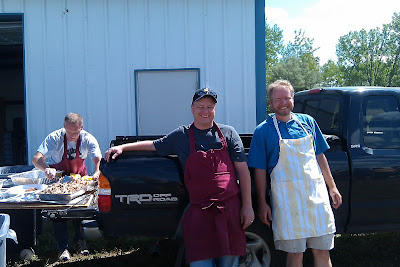 Hubs was home for good by 1:30 this afternoon. He was starting to drag, so he laid down on the bed and passed out cold for four hours.

But now, the man is up. He’s up because the Denver Broncos have their first pre-season game tonight (which is nothing short of a major holiday at our house), and a lack of sleep will not keep him from watching his blue and orange boys play some ball, so he’s sitting on the sofa, in front of the big screen, with a plate of leftover pork in front of him. He mumbled something a few moments ago that sounded a lot like, “Good times. Good times.”

And he’s announced that he and Sister’s Husband are already planning to roast another pig for a tailgate party this fall. So when the Broncos (Hubs’ team) play the ’49ers (Sister’s Husband’s team), head on over to our house.

We’ll probably still be trying to use up the huge volume of spicy BBQ sauces that were cooked up this week.