So the alarm went off this morning, when it was still dark outside, and I jumped out of bed to try to answer the phone.

The phone which I apparently thought we kept under our bed, because that’s where I found myself — staring under the bed, with the alarm blasting full force and the phone sitting silent, when I finally gained consciousness. I had been dreaming that I was on a train, and we were riding the train through a field of barns, and all of the animals were standing up waving at us, and I kept remarking that it was certainly nice that the cows and the giraffes were waving.

Don’t judge me. My dreams have never made sense; Hubs asked me a long time ago to please just quit sharing them with him, because he was no Daniel, and he couldn’t interpret them, and hearing of my nightly dream adventures really just wore him out in the mornings.

We got off to a fabulous start this morning, as we showered and dressed and ate Froot Loops, because it was the first day of the fourth grade. For the first time ever, the boy came into my bathroom and asked, “Hey, Mom? Would you, um, blow dry my hair?” Apparently he wanted the mop to be done a bit differently this morning, which could be a sign of the winds of change. He’s never cared a lick about whether his hair was combed or not, but the 4th grade seems to be bringing out a different attitude there already.

The boy looked incredibly cute in his Ralph Lauren for the Visually Impaired shirt, and I made him stand beneath the tree and take the obligatory first-day-of-school photos. 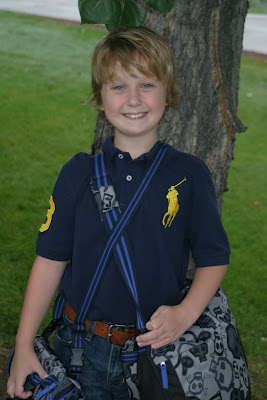 After the camera’s memory card was bursting with all the pictures of the boy armed with his new messenger bag and his new lunchbox, Hubs and I drove him across town. We walked him into school and down the hallway to his classroom.

We said good morning to Enzo. And then we stopped for a Kodak moment with Enzo. They’ll both thank me for this when they’re 35 years old, and they look back at it and say, “Dang! Were we ever cute, but look at our stupid hairstyles from 2010!”

Enzo was rocking the faux hawk; the boy was trying to pull off the Justin Bieber ‘do. 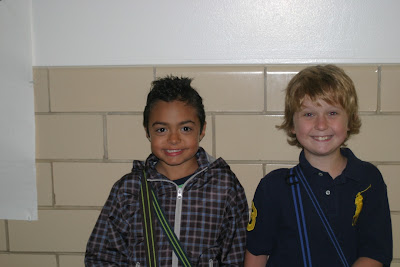 Eventually, we made it to the far end of the hallway (because the boy’s classroom is the very! last! one! in the long hallway), and we said good morning to Carter, who was also sporting the stylish faux hawk. Overnight, these boys have decided to take an interest in their hair. I’m not sure whether this is a good or bad sign, but I give thanks that they’re only interested in tidying up their hair with gel products and blow dryers, and apparently not yet interested in securing a girlfriend for themselves. 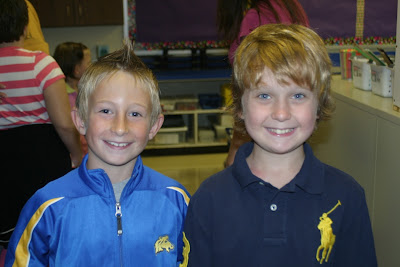 And then we snapped a picture with Kellen, who continues to prefer the uncombed, unkempt hair style. His poor mama is waiting for the day that he decides to take pride in his mop. She was, in fact, trying to slick his wayward rooster’s tail down as she shoved him toward the coat rack in the kids’ classroom today. 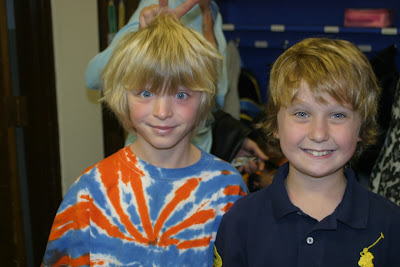 After the boy had greeted everyone and hung up his bag, he found his desk and sat down. His desk is smack across from Kellen’s desk, but I doubt that it’ll be there tomorrow! I’m sure that the boys’ teacher will quickly learn the simple math fact that The Boy’s Desk + Kellen’s Desk + Directly Across From Each Other = Nonstop Talking and Laughing. The boy and Kellen are very tight, and they will talk a mile a minute to each other, if they are anywhere near one another.
Really, at this point, there was nothing left for Hubs and I to do, so I simply called out the boy’s name from across the classroom. When he looked up, I waved at him, mouthed the words, “I love you,” and headed for the door. Just then, he hopped out of his seat, and he ran four steps toward me. Unfortunately, I was a good fifteen steps away, and after four steps in my direction, with his arms apparently outstretched for a quick good-bye hug, the boy had a change of heart. He spun around. And he headed right back to his seat. He had snubbed me.

I walked out into the hallway with Hubs and pretty much burst into tears, as I repeated, over and over, “He skipped the hug! He snubbed me!” Hubs said, “Honey, you knew this day was coming. He’s with his buddies in there; guys don’t hug their moms in front of their buddies when they’re ten! I didn’t hug MY mom in front of the guys when I was ten! It’s not cool!”

Naturally, Hubs’ words were just eight kinds of wrong, because what I really wanted him to say was, “I can’t believe that little creep! Not hugging his own mama! We’ve really raised a rotten, black-hearted kid, if you ask me.”

And then, goodness! The two of us walked down the hallway together, and I had to just PULL IT TOGETHER, SALLY! IT’S ONLY THE 4TH GRADE! YOU’RE NOT SENDING HIM TO IRAQ!

After I’d taped my broken heart together (Did I mention that I was snubbed this morning?), I dropped Hubs off at his office, and I met the girls for coffee, and then I came home and wandered around my already clean house, wondering how many more hours it was until 3:00, so I could go get him and hear all about his first day of the fourth grade.

The clouds rolled in this afternoon, so when the big mob of parents collected our kids at the front doors of the school, it was pouring rain. Pouring. The rain was coming down sideways, and we all had to run! Just run like the wind to our cars!

And on that run? Yeah, baby! A short, shaggy-haired 4th grader grabbed my hand and said, “Faster, Mom! We can make it!”

When we got to the Suburban and climbed inside, we were soaked clear through, but the world was right once again. He may have skipped the good-bye hug in his classroom this morning, but he was determined to hold my hand and drag his poor mother through the torrential downpour this afternoon.

Because he loves his mama.

Because of the wild rainstorm, and the fact that it was a frigid 55 degrees outside, some of us moms took our boys to a coffee shop downtown, where we had chai tea and hot cocoa and homemade toast and chocolate chip cookies.

I think our troop of boys almost overwhelmed the other coffee shop patrons, because OH MY WORD! They were just so excited to shout out every wonderful thing about their first day of school together, and they had to punch one another’s arms and try to wrestle one another to the floor of the coffee shop, until four mothers intervened and said, “Listen! We are in a public place, and it’s a rather respectable public place, so please! Sit yourselves down, and use those inside voices that y’all have!”

Here’s the boy and Patrick, Quinn and Kellen at the coffee shop. I tried to take a clear snapshot; I really did. But all I had with me was my trusty phone, and the boys were just so squirmy, because their first day of school had been fantastic, and they were busy making enormous weekend plans already. 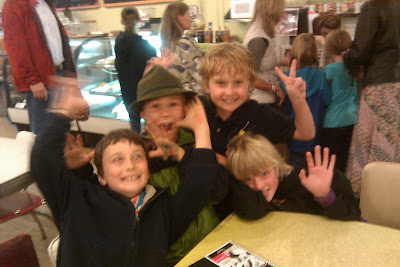 While we were all sitting at a table together, Kellen’s mom and I got to asking the boys what they wanted to be when they grew up. Kellen said, “Well, I’m going to play Major League Baseball, and when I’m not playing baseball, I’ll probably work as an architect.” The other boys had similar career choices, and then MY BOY piped up and said, “I think I’ll just own a pawn shop when I’m a grown up.”

Clearly, he has set some academic goals for the 4th grade already.

So far the 4th grade is treating us well, so I guess we’ll just redo the whole procedure again tomorrow morning.

And then for another 178 days after that.

And during the course of those 178 other days, I will keep my fingers crossed that the boy’s teacher instills inside of him a love for higher education, so that he doesn’t have to spend his entire adult life handing out twenty dollar bills for ancient PlayStation 3s and antique Atari game systems.

1 thought on “The First Day of the Fourth Grade”