First of all, I have to say this one thing: Seventy-four and cloudy, with some light rain showers thrown in there? Welcome back, Darling! Oh, how I have missed you! Your despicable cousin, One Hundred, has been around these parts entirely too often lately.

Regardless of the fact that the weather was cool and overcast all day, that boy of ours and the cute neighbor boy played in the pool for two hours. This is becoming a bit of a summer trend at our house. The boy wears his dress shorts and his collared shirts all morning on the golf course, and then he comes home, throws those clothes on his closet floor, and spends the rest of the day in nothing but swim trunks and flip flops.

He has also suggested that it would be powerfully nice of the cute neighbor boy’s mama to open a concession stand right next to their enormous, above-ground swimming pool, so that he could pop out of the water once in a while and order nachos and pizza slices. When I raised my eyebrows at him, he was quick to add, “And apples, Mom. Also…apples.”

I have been doing a Bible study this summer on the book of Ruth. We have a workbook, which was written by Kelly Minter, and listen, people! Fab. U. Lous. I have this tendency to read books of the Bible at face value, and glean very little. Thankfully, there are those out there like Kelly Minter (And Beth Moore! Because we all know that Beth is my best friend; she just doesn’t know it yet!) who can read four short chapters in the Bible and produce 175 pages of deep, thought-provoking study material.

Kelly’s workbook on the book of Ruth is loaded with recipes, so our Bible study group decided to make them all tonight, since it was our last night together for the summer.

We had a feast laid out on the table this evening that looked more like we were feeding a Habitat for Humanity building crew, instead of a pack of girls, and we ate it all.

And I will just be upfront and tell you that the Banoffi Pie almost killed me tonight! People, I am hard-pressed to think of a dessert that I’ve tasted in the past that was as wonderful as this one. We all groaned with delight when we ate it; we swirled it around on our tongues to savor every last second of its taste.. We never wanted this dessert to end!! And then we realized, after we’d already committed ourselves, how rich it was.

Oh, but it was very rich.

Rich enough that I threw down my spoon and announced to Sister and Missi, “I think I’m about to throw myself into a diabetic coma!” Missi looked at me and said, “Dude! Me, too! In fact, I have tunnel vision, my ears are ringing, and all this sweetness is making my teeth itch.”

Missi is not dramatic at all. And itching teeth? It’s totally a symptom of a sugary overdose.

We were troopers, though, and we finished our slices of the Banoffi Pie.

I also looked at the recipe, and it is entirely too difficult for me to tackle.

I think I mentally bailed out of it when I read (and I quote!), “Immerse the unopened cans of sweetened condensed milk in a deep pan of boiling water. Cover and boil for three hours, making sure the cans remain covered with water. Add water as needed.”

Um, three hours? Three hours dedicated to a single recipe? Yeah. That’s why I befriended Missi a long, long time ago; she has the stamina for such things. Plus, the girl knows me well, because tonight she said, “Hey, you know the Southwest Chicken Soup? Honey, seven ingredients. I know that’s two more ingredients than your limit allows, but it’s definitely something even Jedi Mama could make.”

Well, then. She’s lucky that I love her as much as I do.

And also? I think I have something of a reputation for really preferring to cook meals with five ingredients or less.

My high school yearbook could have had my name printed boldly under the title, “Most Likely To Cook With Minimal Ingredients.”

Oh, who am I trying to kid? The yearbook would have read, “Most Likely to Just Microwave Dinner.”

But guess what? Tonight? Before I went to Bible study? Well, I made homemade tacos for Hubs and the boy to eat while I was gone, and that particular dinner is their very favorite one. In fact, the boy said the blessing over the meal, and he said, “And, God, thank you for Mom’s homemade tacos, because they’re my favorite, and please bless them to our bodies.”

Clearly, the boy is my favorite tonight!

Our last Bible study of the summer was so much fun tonight. I even snapped a picture of Sister, Regs, and Missi to remember the evening by. Aren’t they cute? (I should have taken a photo of the Banoffi Pie, too!) 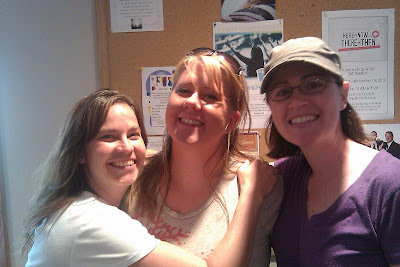 Later, as we were all trying to come to grips with the fact that we had willingly overindulged in a dessert that requires condensed milk to be boiled in its own can for three entire hours, we sat around the table, discussing our week’s worth of homework on the book of Ruth, and I was smacked a little bit hard with some Emotion tonight.

Reading at face value, like I do, I didn’t see anything in those five verses, but Kelly Minter (who wrote 175 pages of homework from Ruth’s four chapters!) had this to say about the beginning of that verse:

“I kind of like that no specific names are given [to the women]; they are just the elusive ‘women.’ Because the reality is that we all know exactly who they are. They are the women we grew up with, the thick-as-thieves church moms who were there when we were born, performed ridiculous skits at our church retreats, helped us celebrate our birthdays, wrote us a big check for graduation, cried at our weddings (or are crying because we haven’t had a wedding yet). They’re the ones who still come scrambling down the church aisle to squeeze the breath out of us when we visit home, and to find out if we’ve met someone…and if there’s going to be a wedding. I love these women! They’re the Mrs. Mitchells, Mrs. Wolfes, Mrs. Wiegolds, Mrs. Hardys. They’re, you know, the women!

“And if you didn’t grow up in a church environment, you still had women. They were your mom’s closet friends and distant friends — the people who colored your childhood and surrounded you. In Naomi’s case, they were the ones who jumped up and down and caused the whole town to stir with excitement over her return (because only women can make an entire town go nuts). And they were the ones Naomi felt comfortable enough with to yell, ‘Don’t call me Naomi! Call me a bitter old woman because God has made my life miserable!’ These are those women. The same ones who wept when Naomi left Bethlehem, rejoiced when she returned, probably gossiped about her after she flipped out, are now gathered around her at the birth of her grandson, speaking words of blessing over her. I would have liked to have gotten in on some of this, actually, because church moms know how to speak some blessing — even the conservative ones!”

The author of our Bible study got all of that out of the five simple words, “The women said to Naomi.”

My Emotions flared up tonight while we discussed this, because I realized that I am blessed with some women in my life right now, who are blessing my son. My son knows him some women! The boy has women who spoil him rotten on his birthday. He has women who pinch his cheeks. He has women who kneel down before him and ask him to explain, in detail, the latest science experiment that he’s tried, and they pay attention when he talks. I have friends who come and watch our boy’s soccer games, his football games, and his piano recitals, just because they adore him. There are women in the boy’s life who slip him quarters for gumball machines and marvel over his drawings and paintings. They encourage him, they lift him up, they love and adore him. He’s blessed with women who will gently correct him if he steps out of line, but, more importantly, that kid is blessed with a pack of women who praise him for his accomplishments and encourage him to be the warrior that he’s growing up to be.

And I get a lot of joy out of this.

Because I know, as the boy grows up and gets closer and closer to those teenage years, there are a whole lot of women who will spy on him and give me weekly reports on what he’s doing. Or not doing. And who he’s hanging out with. Oh, darling Boy, you may consider this enormous pack of women to be a curse when you’re fifteen!

Anyway, those were just my thoughts tonight. I cannot imagine a life without my pack of closest girlfriends, who give so much to my son.

And there’s one woman who has been a major part of my son’s life, for several years, before she chose her husband over her friends, and decided that living with him in a different state was better than staying in Small Town, USA with her closest girlfriends and living in a cardboard box. We have, of course, forgiven her for choosing to move far, far away with her husband, instead of picking us girls and staying behind, letting him trek across the United States without her. Families do need to stick together.

And, if you ever need your basement painted when you’re building a new house, and Elaine is in town with nothing but her very favorite Capri pants, don’t be surprised if she dons a Hefty garbage bag to keep the paint splatters off of them! Oh, Elaine! You’re still hot! 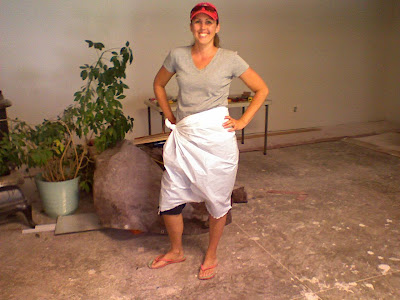 And to all of the women in my son’s life — to all of my closest girlfriends and family members — thank you for everything that you do for the boy.