It seems like every day I am reminded that…AGE!! IT’S HAPPENING!

The boy asked me a couple of days ago if I had the luxury of having pens and pencils when I was a young girl, or if I simply dipped a quill in ink so that I could do my homework each night.

Last year, he had the audacity to ask me, “Mom, when you were little, did you just play with sticks and rocks, since plastic hadn’t been invented yet?” Without missing a beat, Hubs immediately answered by saying, “No. Your mother played with dinosaur bones when she was your age, because they hadn’t been covered up by all the dirt yet.”

A joy, people. Those boys are both such a tremendous joy in my life.

Then, last week, one of the kindergartners in my PE class told me, “You are the VERY BEST gym teacher I’ve ever had!” I refrained from telling her that I was actually the ONLY gym teacher that she’s ever had. The little cutie pie went on to say, “I don’t ever want you to retire!” I answered by telling her that I actually had no real plans to retire soon, and she said, “But in a couple of years, when you’re super old, I don’t want you to retire!”

She’s flunking kindergarten PE, by the way. I won’t tolerate comments like that from six-year-olds.

Age. It is indeed happening.

In the words of Miss Truvy in Steel Magnolias, “Time marches on, and sooner or later you realize it is marching across your face.”

(How can you not love Dolly Parton?)

So really? Although this morning’s incident was certainly an eye-opener for me, it probably shouldn’t have come as a surprise.

I think it’s because the boy is in a phase. And he keeps playing Mike’s songs on an endless loop, thanks to the technology that is the Repeated Play List. This endless loop has been going on for months now.

I told Hubs, “Well, in 1984, my softball team could totally rock Beat It. In fact, we used to copy Michael Jackson’s dance moves on the softball field, right there between first and second bases.”

And we did, people. During practices, that is. We never went live during a game with our performances because EMBARRASSMENT!!

And truly, I should have just left well enough alone and called my announcement good, but NO! I stepped away from the sink, and I did a little jump backwards after that, and I tossed my hair and jutted a hip and flapped my arms, and I showed Hubs some dance moves that he hasn’t seen since 1984.

The look on Hubs’ face was priceless, because it’s not every day that I bust a move like that. His jaw sort of dropped a little bit, and his eyebrows lifted high, and really? I think he was plum impressed with my mad dance skillz, people!

And that’s when IT happened.

I totally popped my back, and the resulting injury was a pinched nerve that totally shut down all left-direction movement of my neck!

Hubs was first alerted to the searing pain underneath my left shoulder blade when I bawled out, “OHMYWORD! OHMYWORD!!! I hurt myself! And badly!”

I imagine that if we’d been smack in the middle of Pretty in Pink, this would have been the exact moment when Blaine put his arm around Andie Walsh and said something wonderful and comforting. Something like, “Darling, are you okay?”

Instead, Hubs said to me, “Good grief! Don’t fling yourself all over the bathroom like that! At your age, you’re going to break a hip, and I’m not buying you a new, plastic one before I buy an engine for my Camaro!”

I moaned out, “Oh, Hubs! My shoulder is killing me!”

And Hubs said, “I don’t doubt it. You’re no young chicken anymore. Bones like yours are fragile.”

I think what shocked me the most was that I totally FELT fourteen in my heart! And I wanted to dance like that fourteen-year-old from yesteryear, who could have made heads turn with her Beat It rendition on the softball field. (With her short stop and right fielder as back-up dancers, of course.) Only there I was, with bones that were, quite clearly, no longer in their proper places, and a nerve that was pinched almost to the point of being severed.

I think that it was a primary nerve in my body, too, because my arm went numb and I lost all sensation in my neck.

I told Hubs, “I need my chiropractor!”

And Hubs, who is quite friendly with our chiropractor, said, “Are you going to tell him how you dislocated your spine, or do you want me to? Because honestly? I think I would quite enjoy telling Dr. H. about your little mishap, and HOW it came to happen!”

Later, after dropping the boy off at school, I hobbled into work at the church office and told Susan, “Listen. I will be going to the chiropractor today, because I’ve got myself in a bit of a pickle.”

In a bit of a pickle is what Regan says, every time she throws HER back out. Which is often.

And then, trusting that Susan was a high-quality person, who would keep the issue of HOW the injury happened to herself, I gave her a brief, unadorned overview. She, in turn, told our pastor.

Pastor John howled with laughter and said, “I could totally work a sermon around the story of that injury!”

So clearly, my injury is no longer a private matter.

However, when people ask me, I’m just going to tell them, “Yes, I hurt my shoulder. It’s an old dance injury.”

This afternoon, I walked into our chiropractor’s office and stated, “I’m in a bit of a pickle. I think the Alpha Nerve has been severed plum in half.”

Naturally, he asked me how I hurt it.

So I told him. “It’s an old dance injury. It happened this morning, when I was working out the logistics of a moonwalk-and-twirl combo maneuver to Michael Jackson’s Beat It. And I’m only telling you this because I know that Hubs will tell you later anyway.”

And then he popped my back, and it cracked like a string of firecrackers going off on Independence Day, and then!

The Alpha Nerve was much better.

Oh, my old dance injury is still flared up a little bit tonight, but if this morning was a 12 on the pain scale of 1 to 10, then tonight it’s a 2. Maybe even a 2 MINUS.

I think I’ll live after all.

But this old dance injury of mine got me to thinking about age…and getting older…and birthdays.

Because really? What you need in order to get older are actually MORE birthdays.

And I JUST HAPPEN to know someone who is having a birthday TODAY. So naturally, I called her husband and said, “Listen, Bryan. I need some old snapshots of Amy. I’m going to put them live, on my blog, on the World Wide Web. Can you help me out?”

And Bryan replied, “I certainly won’t! Good grief! Who do you take me for? Asking me to willingly hand over pictures of Amy from junior high school! The nerve!”

(Would that be the nerve that I severed this morning, or not?)

I can’t tell you whether or not Bryan caved and brought me some pictures of Amy, or whether I broke into their house, while they were both at work, and just stole them myself. But what I can tell you is that this is Amy in her early high school years, when she was photographed wearing her flight goggles. 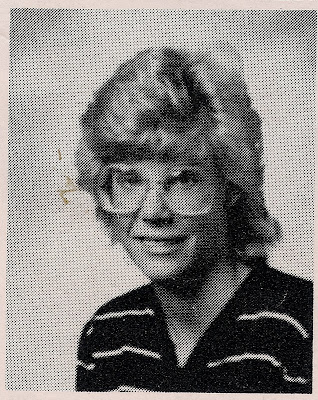 Oh, Amy! I had the EXACT same pair of glasses. And I threw out my back this morning while I was flopping out a dance move to Beat It in my bathroom. Clearly, that is more embarrassing than any glasses you wore in high school.

I also managed to get my hands on a little bit younger snapshot of Amy, which was taken when the wagon train heading West to Oregon stopped for supplies.

(And also? I’m quite certain that when my boy grows up and owns that pawn shop he’s dreaming of, he’ll sell vintage yellow phones exactly like this one!) 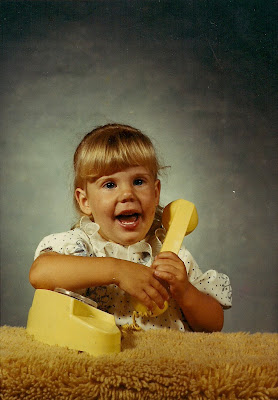 And then, to further both of our embarrassment, I give you this picture. In reality, I think that Amy looks the most normal in this snapshot, because…MULLET! And really? I can’t even begin to imagine why I owned a pair of funky, purple spandex running tights. And if I admit to owning them, I cannot for the life of me fathom why I was seen in public in them. And then there’s Amy today. In this horribly grainy picture, which I quite illegally stole off of her Facebook page this evening. Isn’t she cute? I mean, even at her age, she’s cute!

Happy birthday, Amy! You’re one sweet girl, and what I love the very best about you is this: You’re older than I am! You’re cute as a button, you’re one of the kindest girls I know, and I adore you to death!

And please! Refrain from rambunctious dance moves in your bathroom. At your age, such moves could be detrimental to your body!

And now I have to wrap things up and go watch the latest episode of Glee, which is on our DVR, because, unlike me, those kids can dance!

1 thought on “At Our Age, We Should Just Stick to Shuffleboard”