This morning when the alarm went off, I was in the middle of helping a set of twins in the boy’s class bake their Pillsbury cinnamon rolls in the microwave in the school’s cafeteria. They had each brought a tube of the doughy delicacies in their lunchboxes, but they couldn’t get them baked, so I was helping them lay the rolls out on the cookie sheet, and we had stuffed them into the microwave to bake.

It was the alarm clock going off, which was a fantastic relief, because the cookie sheets that I’d put the doughy rolls on were made of metal, and everyone knows that this would have been one regretted mistake in real life.

This is precisely why Hubs has asked me, “Please do not share your dreams with me any more.”

I’m wondering what Daniel would have had to say on baking cinnamon rolls on a metal cookie sheet in a microwave in a school’s cafeteria with a set of twins who brought them for lunch.

I’m sure that he would have said, “You need a twelve-step program, and you also need to quit taking the allergy meds right before you go to bed.”

Regardless, I got up this morning, and I plugged in the hot rollers, and wow! It has been a long, long time since I achieved the level of Total Hair Glory that I had going on at the Jedi Manor this morning. It was just one of those days when the big curls turned out perfectly, and the clipping and the hair spraying all worked in my favor, and when I finished it all up, I actually looked into the mirror and thought, “1987 had nothing on you in hair glory! Today is your day to shine with the Hair Wonderment! You haven’t looked this good since you combined the Rave perm with the Aussie Sprunch Spray.”

Hubs and I had to make a little drive out of town this morning, because I bled some dollar bills through my nose on Saturday and purchased a swanky cabinet at a local antique shop. A cabinet which was plum too big for the Suburban when we were there, so we were on Mission Retrieval this morning.

I had my great hair going, and Hubs had the AM radio going, and I wasn’t even upset with this, because I was on a Full-Tilt Hair Glory High. Usually, I like to inform Hubs that I am way too young for his ridiculous talk radio programs, but, when I do that, he just shoves an AC/DC CD (say that eight times fast!) into the stereo, and I’m forced to listen to how she shook it all night long.

Either that, or my ears bleed with the old Motley Crue and Ratt. Sometimes talk radio is just the lesser of two evils.

This morning, they had a program on where people could call in and sell things, and I made the grand mistake of questioning the morning’s line-up, and Hubs looked at me and said, “Have you never heard this show before?”

Eventually, a 1997 GMC truck was advertised for sale for parts, and I told Hubs, “Oh, how exciting; why don’t you call?” Hubs has a problem with adoring old vehicles. And old vehicle parts cause his heart to twitter with love. And then, before he could even respond, I added, “Oh, wait. It’s a 1997. That’s way too new for you!”

Hubs just chuckled and said, “If it was a ’67 GMC being sold for parts, I’d be pulling over to the side of the road before we totally go dark and lose cell service, so that I could call them.”

This is Hubs’ greatest downfall; he doesn’t think that any vehicle manufactured after 1969 is worth a second glance.

Unless it’s a truck with a super sweet lift kit and large tires.

Eventually, I realized that my Hair Glory High was turning into an Exhaust High, and I told Hubs, “Listen. Your truck smells like exhaust fumes.” Mostly, I was concerned that my mane of hair glory was going to absorb some of the rancid fumes, and then some of the magic might be lost, because even Julia Roberts’ red mane of wonder would lose something, if it smelled like exhaust.

Hubs remarked, “Well, this truck has 223,000 miles on it. I expect that it has some holes down there in the exhaust system, and I’m thankful that that’s the only thing wrong with it. Besides, I think it smells fantastic.”

It’s a little cocktail of perfect smells for Hubs.

We did pick up the cabinet, and we did bring it home, and then I was off to tie little tennis shoes in kindergarten PE.

Let me tell you this one thing: When you’re surrounded by thirteen five-year-olds, nobody ever says, “Wow! Your hair looks Jesus Himself styled it this morning!” Instead, they are more prone to say things like, “When is recess?”

(And also? I made the mistake of asking the pre-kindergartners today what the best thing about school was, and one of them looked me square in the eye and said, “Snacks. I do like coming into the gym to run, but you don’t have snacks in here, so gym isn’t my favorite thing at school.” Note to self: Buy goldfish crackers for pre-k to completely win their hearts.)

Tonight the boy had another football game, so we piled ourselves into the Suburban (which does not stink of exhaust fumes), and we took my Great Mane of Hair Glory to the football field, and listen, people.

Great Hair + Wind = Not So Great Hair Any Longer.

By halftime, my curls had blown themselves into a snarled mess, because I hadn’t thought to tie it back in the wind, and I felt like I should be extending an invitation to Ratatouille: Please, little rat chef, come live in the nest that my hair has turned into.

By the end of the game, as we were trying to leave, the ten-minute torrential downpour hit, and my Great Mane of Hair Glory was completely ruined. I resembled the proverbial drowned rat, and I decided that I had more in common with Ratatouille than I had originally thought.

Except he cooks far better than I do.

All good things must eventually come to an end, and, sadly, that includes great hair days.

But, OH MY WORD! The boy played quarterback tonight, and he rocked the football field, and I wanted to shout out, “Tebow’s got nothin’ on ya, Babe!” Our little Broncos quarterback was fantastic out there, and the boy had his own cheering section this evening, as friends and family shouted him on to QB Magnificence. And listen, people. Here’s the kicker.

My camera is almost an extension of my body. Where my arms go, my camera goes.

And tonight I did not have it with me. The boy was throwing the ball, and the camera was tucked away in the black camera bag, in my closet at home, where clearly it was doing me a whole lot of good.

Thankfully, I had the trusty computerized, space-shuttle-launching phone with me, so I did the best that I could.

The snapshots are blurry, but they were taken with a phone, people. A phone from the sidelines of the football field. It’s the best I could do.

But did I mention that I experienced Sweet Hair Glory today?

“I promise that my personal tragedy (of not having my camera with me) will not interfere with my ability to do good hair.” Quick! Name the movie.

And here is young Tebow, himself. He’s the QB in the Broncos jersey, with the orange stripes down his legs. 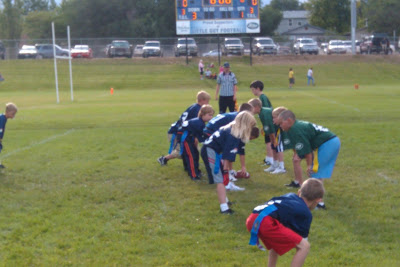 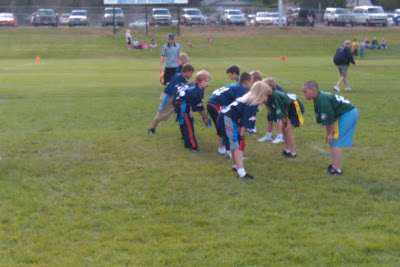 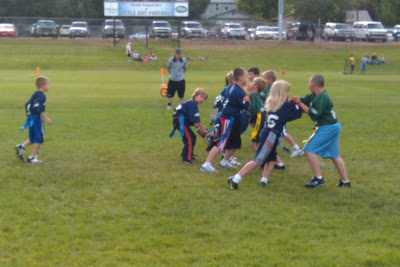 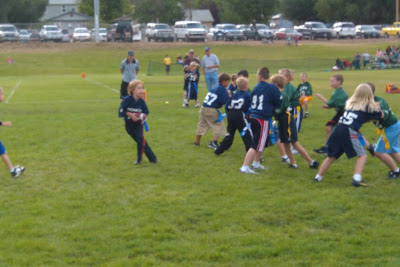