Halloween ’10 will go down in our history books as the year in which Halloween kicked us through a wall, circled around outside, and kicked us again while we were down, holding our sides and moaning about broken ribs and such.

Halloween ’10 plum wore us out, and I’ll tell you how I know this to be true.

Yesterday morning, the boy’s alarm went off, and he simply smacked the snooze button. The boy never smacks the snooze button because THINGS TO DO! If the alarm has gone off, he embraces the day and gets up. After telling the bump under the quilt in the boy’s bed that SCHOOL, IT WAITS FOR NO ONE, Hubs and I managed to get him up yesterday morning and propelled towards the shower in his bathroom.

The shower which went on and on and on, before it quite miraculously shut off. After numerous minutes all lined up in a row in which I heard no noises whatsoever coming from the bathroom, I went in to investigate, and our freshly-showered son was asleep in the tub, people. There he was, sopping wet and curled up on the floor of his shower, sound asleep.

Yesterday morning, as I embraced the fact that we would be embarking on our Family Detox Diet, I handed a banana to the boy for breakfast. He looked at it and turned it around in his hands a bit before he asked, “Do we have any ice cream and chocolate syrup to go on top of this?”

I should have known that the weekend was going to bring about some issues, after I had a run in with The Office Strangler on Friday morning.

On Friday, I wore a sassy little scarf number to the church office, where I was working that day.

(It’s always good to clarify WHERE I was working, on any given day, because HELLO! TWO JOBS! I like to use my two jobs to play on the sympathies of others. “I did NOT get the laundry done this week, because I have been slaving away at my two jobs!” Hubs likes to pull the magic carpet right out from underneath of me by claiming, “Yes. You have two jobs, and you work twenty hours a week!”)

(Hubs went as a Buzz Killer for Halloween this year.)

My sassy scarf looked divine. People, I was CUTE on Friday! I’d used the hot rollers in the hair, which had all worked to my advantage, and I had the trendy scarf action going, and dog gone it! People liked me!

And then the photocopier ran out of paper, which is a task that I am PRACTICALLY OVERQUALIFIED TO HANDLE, so I yanked open the drawer, slammed a new ream of paper into it, smacked the door shut, and stood up.

And that is when The Office Strangler attacked.

I had managed to slam my scarf into the copier’s drawer, and when I stood back up with gusto, the entire sassy little number acted as a noose. Later, after untangling myself from near death, I texted Hubs to let him know that he had almost gotten a big wad of large bills from my life insurance policy thrown at him. Hubs simply said, “It’s a good thing you didn’t smack the COPY button before you stood back up. Can you even imagine THAT ONE?”

I don’t even want to go there, people.

Friday morning eventually gave way to Friday afternoon, and I hightailed it across town to the boy’s school, where I watched as the kids in his classroom ingested large amounts of sugary cupcakes and witches’ brew.

A brick of dry ice in a punch bowl is a party waiting to happen, all by itself.

The boy dressed up as Poseidon this year, and let me assure you of this factoid. Wigs and beards (MOST ESPECIALLY BEARDS!) are not my friends! The wig arrived at our front door in a cardboard box, ordered straight from the land of On-Line. It was snarled like a poetry major’s dreadlocks at the university, and I had to invest some muscle into combing it out. When I finished, I told Hubs, “Look at all this gray hair in my brush!” He replied, “Is any of it from the wig, or is it all yours?”

But let’s discuss the beard, shall we? There does not exist on this entire planet a substance which will adhere a cheap gray beard to a ten-year-old boy’s chin. The double-sticky tape was our best bet, and it held the beard long enough for the photo opps before school on Friday morning.

(As a side note, when you DO NOT WANT A BEARD ON, you will wake up one Friday morning to discover an inch-long gray hair growing out of your chin, which certainly wasn’t there on Thursday night, when you washed your face before bed. I have no explanation for how an inch-long gray hair sprouted out on my lower jaw last week, but sprout it did. I’m still trying to come to grips with this horrific fact.)

(I plucked it, by the way. Yanked it out by the roots with a pair of tweezers and did a thirty-minute evaluation in the magnifying mirror for anything else that needed to be plucked, tweezed, groomed or otherwise removed.) 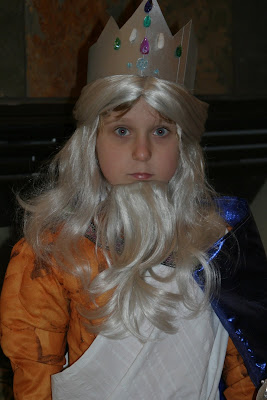 Carter went to school dressed as a Fellow Who Was Too Nerdy To Play Football, and honestly? I think Hubs’ 5th grade class picture was taken with a pair of glasses exactly like these. 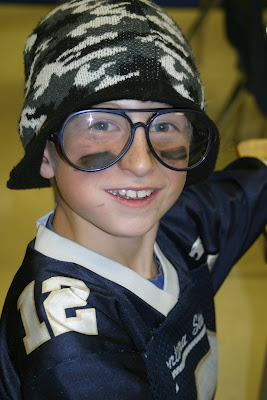 The party really doesn’t start until Cleopatra shows up bearing the dry ice. 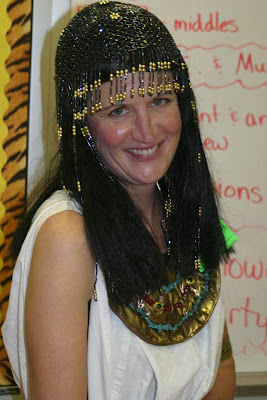 The witches’ brew did not last but six minutes in the bowl, as every small fry in the boy’s class took their turns dipping into it.

Beetlejuice was especially fond of the witches’ brew. 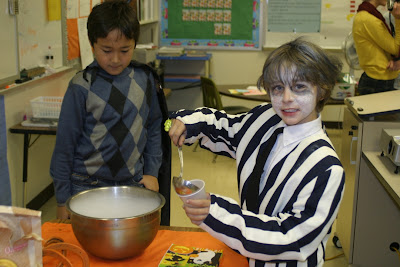 I know that, biologically speaking, the boy is fully mine, because when he tried to dip his punch out of the bowl, his crown fell off and landed smack IN the bowl.

Scarves. Crowns. Our family isn’t very good with either one of them. 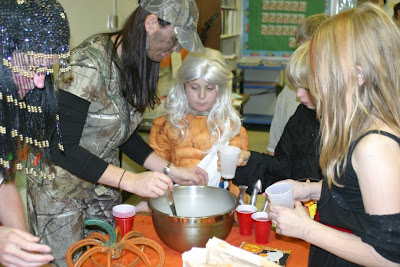 The boy and Kellen managed to ingest their weight in sugar-coated carbohydrates on Friday afternoon. (And would you just look at how RIPPED Poseidon is? Look at those pectoral muscles and biceps! I think that Tinkerbell and the cowgirl gasped!) 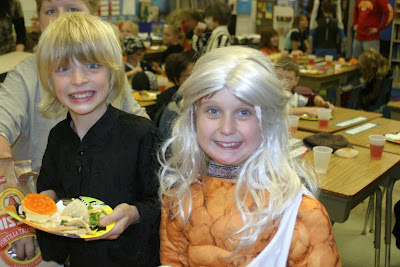 On Friday night, Small Town High had a home football game, which we were all geared up to enthusiastically attend, but alas…it was not to be. Hubs came home from work with the migraine’s big brother, yet he emphatically declared that we could still venture off and cheer our boys to victory.

I don’t know about y’all, but when the migraine’s big brother knocks on MY door, I am rendered completely useless and attending a football game would guarantee that someone in the stands was puked upon.

Pretty? Not at all, people.

Hubs likes to say that this is the difference between testosterone and estrogen, and he claims that he’s simply made of tougher stuff.

Eventually, Hubs began calling his headache The Circus Strong Man’s Sledgehammer to the Brain, so I convinced him to stay at home, where we watched the game on the laptop, and listen, Small Town High School! Let’s not wait until the final two minutes to win the game ever again, m’kay? Y’all make me nervous when you play like that!

On Saturday night, Kellen’s parents hosted the Halloween Party to End All Halloween Parties, where the Jedi Family continued their bad eating habits and filled their plates and bowls with copious amounts of chili and taco dip and pumpkin-laced cheesecake.

And really? Is any party ever a genuine success until Beetlejuice has stood on a rooftop?

(Don’t worry. The roof’s pitch is almost nonexistent, and Beetlejuice was only above the hard deck for a few seconds.) 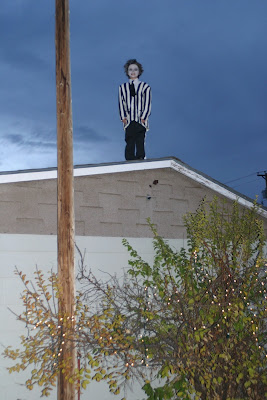 The party was filled with all kinds of kiddos, who decided to play capture the flag in the dark. I have it on good authority that Beetlejuice and Poseidon may have successfully captured the flag belonging to Harry Potter and the two Dementors, although the lady vampire cried foul and declared that MUCH CHEATING HAPPENED. The jury’s still out on this one. 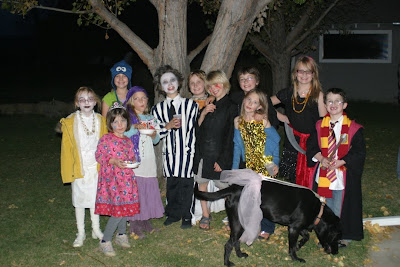 Because Halloween ’10 was the holiday which just wouldn’t die this year, we ventured over to Enzo’s house on Sunday afternoon for a little more partying. The kids made caramel apples, and Enzo’s dad (CHEF EXTRAORDINAIRE) laid out a feast of cheese puffs, orange-frosted sugar cookies, black olives (A HEALTH FOOD!), and Doritos. Everything was orange and black, and the boy ate his dinner standing up at their kitchen table.

Enzo went as Zeus, and he and his Greek brother, Poseidon, posed for a snapshot. I wish that Enzo wasn’t so camera shy all the time. 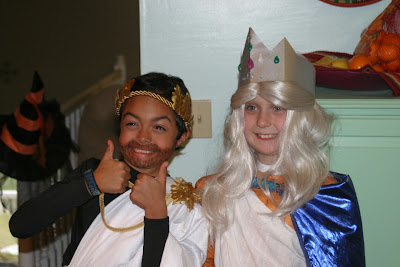 Enzo’s house was the meeting place for the crowd, and we all set out to knock on the doors of strangers and request chocolate. This was ONE-THIRD of the crew who ended up trick-or-treating with us. At one point, we had enough kids in our entourage of treat-gatherers to populate Southern China. 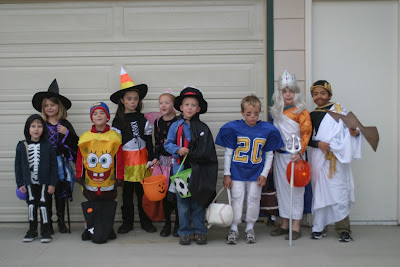 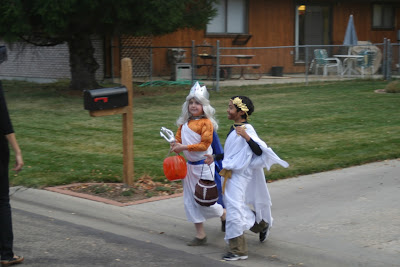 The boy’s cousin, R, joined us, and I have to say that she’s the cutest ladybug I’ve ever seen! 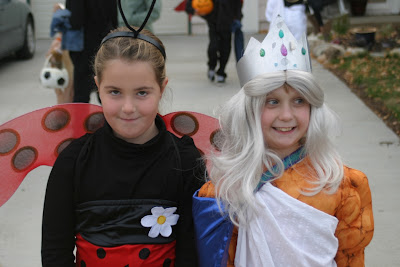 Carter modified his costume a little for Sunday night, and he went as a guy who was, indeed, tough enough to play football. The boys’ friend, Bek, swiped the nerdy glasses for his costume. Although Carter and Bek and Enzo all looked fabulous half-way through our evening, Poseidon was looking a little rough. A little worse for the wear, if you will. The wig was missing. The trident was broken. The blue cape was falling off. The toga had been stepped upon. Repeatedly. And Mama got to carry everything that the boy discarded. I had the camera. I had the wig. I had the beard. I had the crown, at times. Enzo’s mom was equally as burdened, as his younger brother had completely disrobed out of his costume and given her everything to carry! 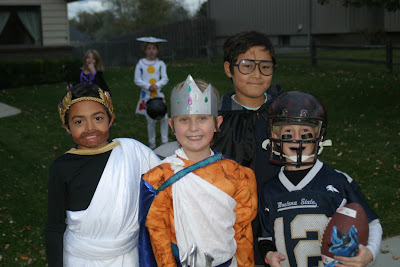 Annie and Molly joined us on Sunday night, too. And, if I am truthful on this blog, I will say that Hubs may have had Carter’s nerdy glasses on in his 5th grade class photo, but I probably had Molly’s red-polka-dotted bow on at some point in my junior year of high school. And I probably looked utterly hot with it in my hair, too. It probably balanced out the shoulder pads in my shirt, I’m thinking. 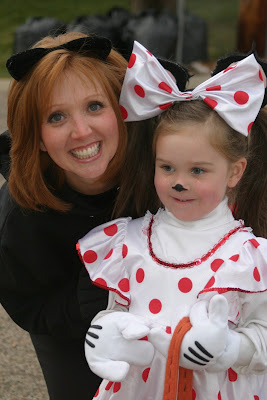 Stacy and Evelyn even smiled for the camera on Sunday night, although, at this point, I had so many COSTUME ACCESSORIES in my hands, I was completely incapable of focusing the camera properly, so these girls are more of a blur than anything, but that’s how we all felt after walking the marathon which was Trick-or-Treating ’10. 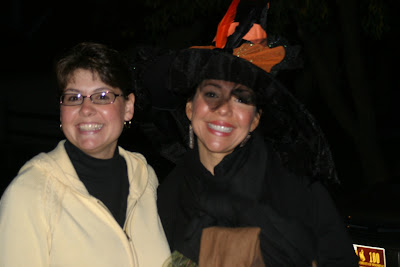 And, of course, we had more cousins on Halloween evening, as we joined up with Sister’s kids, L and K. 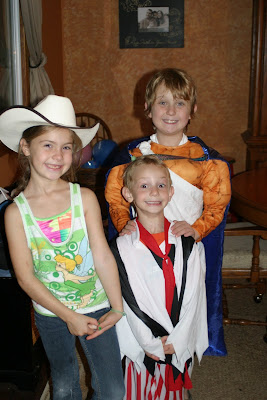 So now, with Halloween ’10 officially and completely behind us, the Jedi House is entering Food Rehab, and I really need to wrap things up here and go make a grocery list.

A grocery list which includes things like broccoli and chicken breasts and and asparagus spears and oatmeal. We’re going to focus our attentions on the bottom of the food pyramid this week, and try to stay away from that crowning point of the pyramid glory, which houses all the Hershey’s miniatures and delicious cheese puffs.

I’m sure it’ll be hard work, but with any effort, we’ll come out of this week as genuine victors.