Birthday Weekend was pulled off rather swimmingly at the Jedi Manor.

Hubs, you see, turned old, and we celebrated in style by hauling our family of three to the football field, where we cheered out hearts out for our Small Town High boys. The stands were packed as fully as my garage continues to be, even though we have lived here, in this house, for two full years.

I try not to think about it.

We met Heather and Tyler, and Clint and Nancy, and the Pauls (two Pauls) at the game, and we wedged ourselves into the bleachers like germs in a kindergarten classroom. We were tight, people. My right knee served as a lumbar support for Clint’s back all night long. If one of us stood up, we all had to stand up, because unwedging just one body wasn’t possible. We rose as a unit to cheer when the Small Town boys broke free with the ball and made amazing runs.

And oh, people! Those Small Town High boys were so hot, they were sun spots on Friday night! They threw the ball, they ran the ball, they intercepted the ball, they kicked the ball. And when the smoke finally cleared, our side of the scoreboard was lit up with a big 46, while the opposing team only managed to score 12 measly points.

At one point, Hubs yelled over to me, “Keep your fingers off of your phone! No Pride Texting here tonight! I will break your fingers plum off if you fire off a text to someone from Opponentville and proclaim that your team is winning.”

Well, then. Birthday or not, Hubs had laid down some Serious Ground Rules.

I have learned my lesson, people.

By the time we walked out of the stands with our pack of friends, I was plum hoarse, partly from all the cheering, but mostly from all the talking I did with Nancy and Heather, while the big boys actually concentrated on the game.

On Saturday, Hubs and the boy and I had every intention of heading off to Bigger Town, USA so that we could watch a hockey game. It was Hubs’ birthday weekend, and that’s what he wanted to do. But then Ms. Buzz Killer, who was some stranger-woman wedged in against my left shoulder at the football game, made small talk with us during half-time on Friday night, and she announced the inevitable: Snow. It was coming.

Specifically, she emphatically announced that the weatherman was predicting snow on Tuesday, and that caused Hubs and I to pause and evaluate things.

You see, we live in the middle of Sherwood Forest, and we had the leaves of 4,783 trees sitting in our yard. With Hubs’ birthday weekend promising glorious weather, we decided to be (gasp!) RESPONSIBLE HOMEOWNERS, which meant that we listened to the stranger in the football stands. We took advantage of Saturday’s phenomenal weather, and we raked leaves.

People, I love living smack in the center of Sherwood Forest in the summertime. The shade? Well, it’s a glorious thing, especially since our deck is on the southern side of our house, which would normally make for some very sweltering evenings at the patio table. But the trees in back? Well, they shade that deck of ours quite nicely.

On Saturday, though, I decided to just trade the leaf blower in for a chainsaw. I was ready to cut the offending bark-covered plants down and start my own paper company. Dunder Mifflin wouldn’t have been able to keep up.

By Saturday night, Hubs and I felt like we were 90 years old, and we wanted nothing more than a prune juice cocktail followed by an hour in front of The Lawrence Welk Show, so that we could clap over all the bubbles before we called it a night.

But, people! We moved our clocks back an hour on Saturday night, which is MY VERY MOST FAVORITE DAY OF THE YEAR!

It’s better than my birthday! It’s better than the first day of summer vacation! I love and adore the lone Saturday night each year, when we dance like crazy people at our house, pull all the clocks off of the walls, and move those clock hands BACKWARDS!

As we shuffled our aching bodies to bed on Saturday night, Hubs said, “Hey. It’s your favorite day of the year.”

Yes. Yes, it was. And Hubs remembered, because Hubs knows me very well.

And all the leaf-collecting ruined my favorite day of the year.

The boy DID NOT rake leaves on Saturday. Nope. The boy was spoiled rotten by Hubs’ parents on Saturday morning, as we had Hubs’ Post-Birthday Birthday Breakfast. Hubs got a new fancy grill as a gift, and we grilled bacon outside, and let me tell you this: The neighbors? Well, they sometimes knock on your door when you grill bacon outside, and they proclaim, “Goodness! Things are smelling quite wonderful at your place today!” Hubs’ mama brought chocolate-iced donuts for the boy, and he thought he’d reached the pinnacle of Halloween week.

The boy ate two donuts in plain sight of us, and then he devoured a third donut when no one was looking. You have to watch ten-year-old boys. They’ll eat the entire contents of your refrigerator, if you’re not looking, and they’ll just take the bag of sugar out of the pantry and sit down with it and a spoon.

Since Hubs and I were busy blowing and raking leaves, we have no pictures of the boy at the exact moment when he reeled this gigantic swimmer in, but Mama took plenty of pictures when Pa brought him (and the fish!) home. 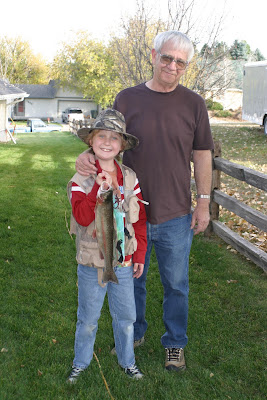 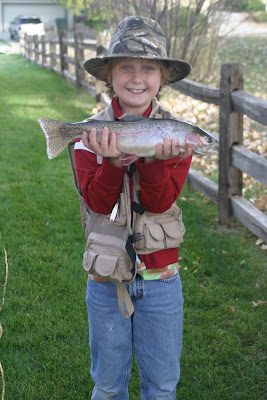 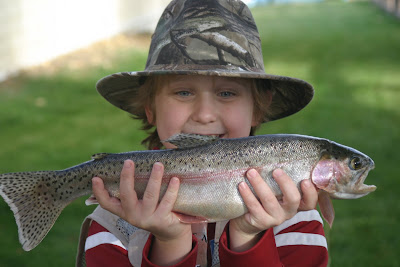 On Saturday night, Hubs taught the boy how to gut and clean a fish. The boy spent a substantial amount of time poking the dead creature’s eyeballs, which made him laugh like he needed to be committed to a special place for people who…well…laugh over poking fish eyeballs.

The Y chromosome grosses me out a lot of the time.

And then, guess what? NEW TRAEGER BIRTHDAY BARBECUE! The trout was slathered in butter, sprinkled with salt and pepper, wrapped in foil, and Hubs and the boy SMOKED IT on the grill, while I made mashed potatoes and broccoli and cauliflower.

Throughout our entire dinner, the boy kept proclaiming, “Isn’t this THE VERY BEST meal you’ve ever eaten, Mom? Dad, can you believe that this fish was just swimming in the pond this morning, and then I caught him, and I provided dinner for our family tonight?”

Hubs and I love that kid!

And really? It was probably the best Rainbow Trout Hubs and I had ever eaten. Hands down. And Hubs must’ve said, at least twelve dozen times, in his best Bruce voice from Finding Nemo, “I’M HAVING FISH TONIGHT!”

This morning, we went to church, and then, on November 7th, in Small Town, USA, Hubs and the boy and I went on a picnic at the park. The boy wore shorts. No one wore a jacket. This is the kind of weather usually reserved for November in Palm Springs. Small Town, USA is not a tropical hot spot. By November 7th, Small Town, USA is usually buried beneath snow, while the temperature hovers around the 35-degree mark. We could not believe the glorious weather!

And then, we ventured into Wal-Mart for THE BIG HAUL. As in, the HAUL IN WHICH WE NEEDED EVERYTHING THAT WAL-MART HAD TO SELL.

Because we don’t have a dog.

It was lengthy, people.

It was hefty, people.

HE SURVIVED IT, PEOPLE!! Hubs and Wal-Mart on the weekend usually behave like oil and water. Unfriendlylike, if you will. But today, Hubs managed to get through the major shopping center, and he came out grinning.

And then, as the grand finale for Hubs’ Birthday Weekend, we scooped up the boy’s buddy, Bek, and we went to see Megamind at the theater.

Oh, people! I have but two words for y’all: Seriously and Funny. Hubs and I laughed just as hard as the boys did, and Hubs was in his happy place, because the soundtrack was plum full of songs by AC/DC, Ozzy, and Guns ‘N Roses. For the first time ever, Hubs wants to buy the soundtrack to a CARTOON!

Plus, there were loads and loads of one-liners, which our little family of three will be laughing over for the next several weeks.

“Oh, crud. My spider bite is acting up again.”

That’s the line I intend to use the most. I think it may help reduce my sentence on the Leaf Collection Chain Gang.

So…you know…go! Go see Megamind. It’s funny, and you will laugh and laugh and laugh. And it’s got some fantastic messages aimed smack at everyone, like be yourself, and don’t change your personality and what you like to make someone else happy. And even when you have everything, like wealth and material possessions, you can still be left feeling completely unhappy inside. And happiness comes through friends and family and relationships, and not from things. Yes, people. Solid. Life. Messages.

IN A FILM WHERE WILL FERRELL VOICES THE MAIN CHARACTER! I know! Amazing!
Kudos, Will.
And really? We’ll even come with you to see Megamind, because I think I could probably laugh through it a second time!