Every subdivision has them.

Or at least, the unlucky subdivisions do.

The subdivision that Sister and I grew up in had five horrendously bad ones, and a couple who were just borderline horrendous.

We called them BOYS.

These creatures threw snowballs at Sister and I during the winters while we were growing up. They shot pop bottle rockets at us in the summers. They hung over their deck railings with their binoculars while Sister and I sunbathed in our swimming suits in our backyard. They drove fast, they made obscene bodily noises, they laughed like hyenas, they cheated at board games, they were always quick to show us the snakes they caught, and they were, altogether, quite troublesome.

It was always us against them.

And then, after she graduated from high school, Sister began dating one of these boys. Of all the boys Sister could choose from, she settled on one of the worst troublemakers in our subdivision, because she thought he was dreamy.

(I may have just thrown up a little in my mouth there.)

Yes, Sister pretty much married the boy next door. I, on the other hand, was smart enough to marry OUTSIDE OF our subdivision, where the cute boys lived.

At any rate, today is Sister’s Husband’s birthday.

(Oh, did I say that out loud? Sister’s Husband HATES when I reveal his real age! He still thinks he’s young and wearing his old parachute pants and neon green T-shirt.) 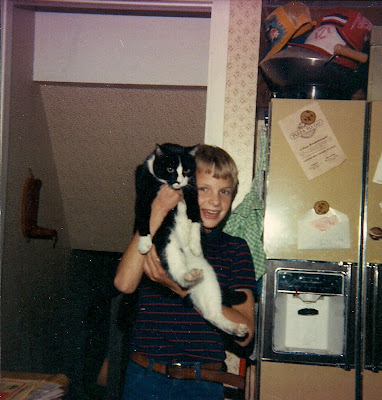 And then the boy began to grow up, and he became decidedly UN-nice, and he thought it was clever to disguise his dog, Buck, as a reindeer. 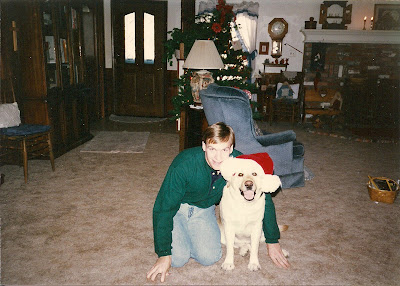 Eventually, Sister married the punk. This photo was taken on one of our camping expeditions. Sister’s Husband’s mouth is full of scrambled eggs, which I cooked over a campfire. Sister’s Husband is always eating SOMETHING, and some of his proudest moments are when he opens wide and shows you a mouthful of partially-chewed food. Sister thought he was funny. You can tell, because she’s laughing. Don’t encourage him, Sister! 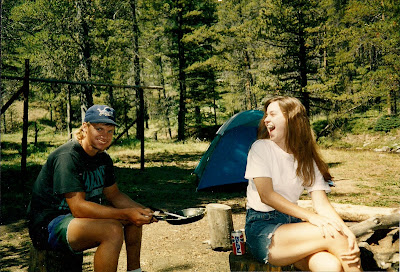 Never mind the fish. Look at that MULLET! 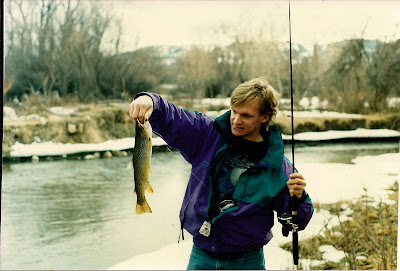 The boys in our subdivision were always fond of catching snakes. Sister and I do not like snakes. For some reason, this just made the boys more apt to show us the snakes when they caught them. 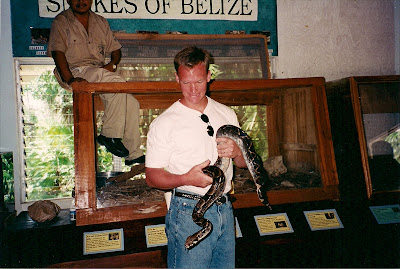 He’ll also eat anything. And by anything, I mean ANY…THING. He’ll eat whatever the kids are stirring up in the kitchen. He has also eaten slugs, for 25 cents. And a worm, for 75 cents. He has eaten cow brains, tongue, intestines, and guts. And yet, the guy will not eat a raw tomato. 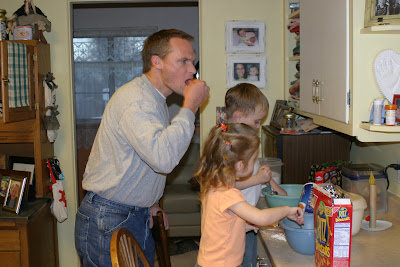 In addition to showing you the food he’s chewed up, Sister’s Husband is also fond of revealing the contents of his nose to you. Sometimes he has to dig a little to get stuff out, but this doesn’t bother him in the least, as evidenced by this next photo. He is also not shy about sitting beside you and announcing, “I’m having some tummy troubles tonight.” And then he likes to rather loudly release some of those tummy troubles right there, smack next to you, so that the air becomes putrid and your nose hairs burn off. Sister’s Husband needs prayer, people. 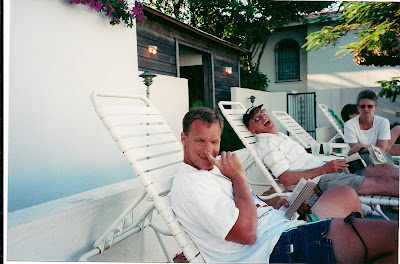 Regardless of his flaws (and there are too many to count here on the blog tonight), Sister’s Husband is…well…family. And we love him. Sort of.

Okay, we love him quite a bit, but don’t tell him. It’s because tonight when the boy called to wish him a happy birthday, Sister’s Husband talked to him about fishing and The Lord of the Rings trilogy for forty-five minutes. Anyone who’ll talk to a small boy for that long on the phone must be okay. Our boy ADORES Uncle Sister’s Husband.

But I do recommend running if Sister’s Husband tells you his stomach hurts.

Happy birthday, Big B. I won’t tell anyone that you’re 48 years old today!