Tomorrow, life will return to normal. Hubs will go back to work. The boy will head off to school. And, since it’s Monday, I will be having coffee in the morning, followed by Housecleaning Power Hour.

Or perhaps we’ll just call it Housecleaning Power Five Hours, because that’s probably a more reasonable time frame for what actually needs to be done around the Jedi Manor, since an archaeological dig needs to be established to uncover our dining room table.

And then we will all be able to take a deep breath and relax, while we are working and learning about metric measurements and scouring toilets that have managed to turn pink inside.

(Don’t judge me on our toilet issue. Toilets turn pink all the time, and their owners still go on to win the Nobel Prize and an Oscar. Pink stuff in the inside of my toilet will not hinder me from my super model status.)

The weekend, you see, was a mass of parties.

It started on Friday afternoon. The boy takes a couple of extra classes each week, which he’s not required to take, but which challenge him. And he loves them. On Friday, one of these classes took a field trip to the local college, where the biology professor there gave them pig hearts to dissect. I cannot even tell you the joy that our little boy faced the day with on Friday morning, as he kept shouting out before school, “I’m dissecting a HEART today!” This announcement was always followed by a lot of fist pumps in the air. When you’re ten, heart dissection is enormously cool. The class went so long, parents had to pick their kiddos up at the college, because there were no buses running to return them to their school. Because I was working, Kellen’s mom scooped the boys up, and she took them to Party #1.

Which really? As far as the boy and Kellen were concerned, the heart dissection was Party #1. They could! not! stop! talking about it! I later asked the boy, “So? Do you think you’ll be a heart surgeon now?” He replied, “No way. I love to cut those hearts apart. I don’t want to repair them! I just want to hack into them and see how they work!” I’m not sure that any other activity at school this year will ever top Friday’s dissection in the boy’s mind.

The boy’s good buddy, Quinn, had turned ten, so Party #1 got itself started after school with a massive snowball fight. I stopped by Quinn’s house to drop his present off just in time to see nine ten-year-olds stuff Kellen into the garbage dumpster and roll him down the driveway.

Oh, he was perfectly happy about doing it. Make no mistake.

While a few other moms stayed at Quinn’s house to indulge in the wine offered by Quinn’s sweet mama, I ran a few errands and popped over to Missi’s house for a bit, to get some snacks ready for Party #2.

At 7:00, Hubs and I picked the boy and Enzo up from Quinn’s house, and we migrated back to Missi’s house with both boys, where Party #2 was in full swing.

And there is wine!

We mingled and talked until my voice was raspy! We laughed with everyone; we told stories; we hugged and ate and drank and were very, very merry.

Although I behaved like a well-paid paparazzi with Missi’s camera, the only decent shot I managed to snag with my phone on Friday night was this one: 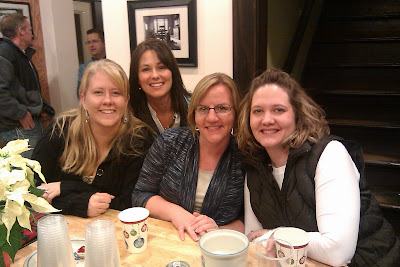 Regan, Sierra, Heather and Katie, y’all look darling, and I love you so much!

I’d show you the four other photos I snapped with my phone, but they’ll make you carsick because OH MY WORD! ALL THE BLURRY! The snazzy little cell phone camera did not live up to my standards on Friday night.

If you would like to see the CLEAR snapshots that I took of everyone, hop on over to Missi’s blog and take a peek. (http://sheridanhuberts.blogspot.com/2010/12/hubert-christmas-pahr-tay.html)

After Hubs and I returned home on Friday night, I was wound up and completely incapable of sleeping, so we stayed up late watching old episodes of Arrested Development, because listen, people. Hubs and I are PREDICTABLE! And also QUITE BORING.

On Saturday morning, the boy dashed off with Mam and Pa and Sister’s kids for a morning of fun at the library and McDonald’s. Mam is not afraid to feed those children French fries and cheeseburgers!

Hubs and I stayed home because THE CARPENTER WAS HERE! And our built-in bookcase is nearly complete, and it looks fabulous.

(And this blog post! It’s so boring! But creative phrases plum escape me tonight, because my brain’s gauge is on the empty side of the scale at the moment.)

(Which doesn’t really differ from other days, I suppose.)

At 1:00 Saturday afternoon, the boy was off to Party #3, because the cute neighbor boy had turned eleven, and he wanted to celebrate with a movie matinee and cake and ice cream and fun games and his closest buddies.

At 4:00 Saturday afternoon, Hubs and the boy and I were off to Party #4, because our niece, Miss R, turned eight years old. 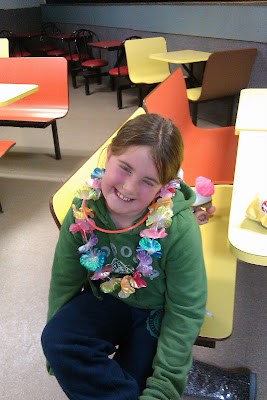 The music was obnoxiously loud, the strobe lights almost gave me a seizure, everyone was reduced to wearing the same dark tan skates with the orange wheels that were rentals when I was a 6th grader, and the party was actually a ton of fun that kept me grinning all afternoon! Nothing warmed my heart more than seeing Brother Joel skating hand-in-hand with his fifteen-years-old-in-ten-more-days son, H.

Not that H WANTED to hold hands while he skated with his dad, because H has a coolness factor, which Brother Joel does not. Brother Joel grabbed H’s hand in a death grip and MADE HIM SKATE HAND IN HAND. And H may be a lot of things (like sweet and handsome and cool), but he’s not yet able to escape the iron-fisted hand clamp of his own daddy.

And then “The Eye of the Tiger” came on, and we all did some fake boxing punches in the air and reminisced about the good old days, which were more commonly called The ’80s, when everyone had bigger hair and bluer eyeshadow.

The kids quickly discovered that thirteen laps around the roller rink was equivalent to one mile, and they spent the afternoon trying to out-skate each other, until they were blurry replicas of themselves, whizzing by on rollerblades.

And I decided that it was time to rewatch Xanadu.

Eventually, the voice over the speakers told us that it was time for the boys to hitchhike, which involved them all standing around the sides of the rink, while the girls skated and picked them up, if they held their outstretched thumbs just right. Hubs and I leaned on the railing and watched the entire hitchhiking scenario unfold.

The boy was not into it; he was very leery of THE WRONG GIRL grabbing his hand, so he waited until his kindergarten cousin, Miss A, skated by and released him from his motionless misery. Miss A punched the boy’s hitchhiking thumb, and off they skated into the sunset, which was a simulated sunset created by a big ball of twirling mirrors and lights. When that skate came to an end, the boy zipped back to us and announced, “Good grief! You have to be careful about who tries to grab you out there, because there were some girls I just wasn’t going to skate with!”

Our advice? Cousins are a safe bet! They’ve seen you at your worst at the kids’ table during Thanksgiving dinner, and they still love you.

By 6:00 Saturday night we were all sweaty and hot and red-cheeked, so we headed home, but not before Hubs spent a solid ten minutes spinning cookies with the Suburban behind the roller rink and congratulating himself on NEAR PERFECT SPINS, EVEN WHILE HE WAS IN FOUR-WHEEL-DRIVE.

Because OH MY WORD, but some MAD DRIVING SKILLS are apparently required to obtain Cookie Perfection with the hubs locked down.

Of course, I was nauseated and ready to throw up, while the boy was shrieking from the back seat that his weekend simply couldn’t get any better.

On account of his Y chromosome, which appreciates a good burned cookie on the icy parking lot.

There is no taming the Y chromosome, once it’s been pumped up by a strobe light and “Eye of the Tiger” at full volume, followed by a nice round of “Beat It” to finish the skate party off.

On Saturday night, I dug out the Tylenol PM and I did imbibe, as I hoped for a good night’s sleep, but listen.

Have you ever had insomnia, after taking a Tylenol PM? People, it’s UNPRETTY! You feel like Marlin Perkins has put the smack down on you, in the form of a heavily-laden tranquilizer dart to the side of the neck, only you lay there, completely unable to give in to the sleep. Clearly, the ability to eat a Tylenol PM and remain awake for most of the night is an art form that few people are physically able to achieve.

I consider myself gifted.

This morning, Hubs and the boy and I hopped off to church, after we had fortified ourselves with the nectar from the java bean plant, via a cup from the loving land of Starbucks, because Mama needed some caffeine to recover from all the lack of sleep, regardless of the drug-induction.

And then, it was on to Party #5 this afternoon, because my darling friend, Nicky, was having a party for GIRLS ONLY, which involved many scrumptious munchies at her house. Nicky teaches at the boy’s school, and she’d invited an entire pack of teachers from school, who are all dear, dear people. We sat around and ate this incredible hot artichoke dip and the new M&Ms which ABSOLUTELY DO NOT HAVE THE CANDY SHELL, and which are nothing more than HEAVENLY PERFECTION, and we laughed until our sides hurt, because teachers know how to party! I feel blessed that the boy is surrounded by all these women at his school.

And now I am home, and Hubs and the boy are whining that they need food, since they did not sit with an enormous pack of girls at Nicky’s house, inhaling hot artichoke dip which will surely be served in the buffet lines in heaven, so I have to find something for them to call dinner.

On account of all the partying that occurred this weekend, and all the time in which I DIDN’T HAVE to get to the grocery store.

Hopefully they’ll both be satisfied with toast tonight, because that’s looking like the prime food staple in the Jedi Kitchen at the moment, and I’m too worn out and spent to venture out to secure anything more nutritionally sound for them.

I hope your weekend was full, too, and that no one at your house got a little seasick when the Suburban spun the cookies!