Skip to primary content
I just have a few things for y’all tonight. Random things. Things with no relation to each other at all.

1. I am on Christmas vacation. As of 2:31 this afternoon, when I waved good-bye to the pre-kindergartners, as they traded their gym shoes for their boots, I do not have to teach another PE class this entire year.

I’m sure that the kindergarten class will be much more mature and distinguished by then.

My glass. It is half full.

2. This morning, I went to make the boy a cold lunch for school, and came to the sad realization that we were out of some things.

I told the boy, “Listen. You have to eat a hot lunch today. I can’t even make you a sandwich. All I could give you in a cold lunch today would be some Ritz crackers and a K-cup of Gloria Jean’s Coffee for the Keurig.”

The boy moaned out, “But we’re having TBA for lunch today, and I HATE the TBAs!”

I looked at the lunch menu, and discovered that today’s menu was TBA. I looked at the boy and said, “But you don’t even know what the menu IS today. It could turn out to be something really good.”

And the boy replied, “I do know what it is! It’s TBA, and TBAs are these really ugly sandwiches that drip barbecue sauce all over the place, and I absolutely hate TBAs.”

This was the exact moment when I realized that the boy and I were most definitely NOT on the same page. Apparently, the last time that the menu said TBA (To Be Announced), the school served rib sandwiches. Which the boy loathes. Hence, he now calls those sandwiches TBAs. I explained the entire concept of TO BE ANNOUNCED, and told him that he’d have to eat a hot lunch.

There was much wailing and gnashing of teeth and ripping of sackcloth, and the boy informed me that it was going to be the worst day of his life, because those TBA sandwiches were just ugly! So ugly! Downright ugly! And TBAs made him miserable.

I ended up using the snarly voice that I use for special occasions, as I firmly said, “Stop whining! I have nothing for your cold lunch today! Pick what you like off the hot lunch tray, and then throw the rest into the garbage can! You’ll have to deal with this today!”

The boy was not happy. He went to school all grumbly-like.

And then, after I’d dropped him off and run a couple of errands, my phone rang. It was Cody. This is what she said: “Um, I am on the interstate, on my way to Gymnastics Land today, and I promised G that I’d take her a Lunchable for lunch today, because the menu said TBA, and she didn’t know what it would be. And then I forgot to do that, before I hit the highway. Could you please, with a lot of sugar on the top, go buy a nacho Lunchable for G and deliver it to the school?”

On the principle of World Fairness, I bought TWO nacho Lunchables, and I left one on the boy’s desk while he was outside at recess.

So that he wouldn’t have to eat that ugly TBA sandwich that swims in disgusting barbecue sauce.

Score one for the boy.

3. With all the holiday stuff that still needs to get done, I am feeling a little overwhelmed and stressed.

And our house looks like an old episode of Sanford and Son. You think I jest, but I do not.

And also? We are running out of clean laundry.

And the bathroom mirrors are coated in toothpaste splatters, and things crunch under our feet when we walk on our floors in bare feet. (I think that most of the crunching can be attributed to stray cereal pieces. Pathetic. Don’t judge us.)

On top of all the housework that needs done, I still need to get the Christmas cards and letters out, and shop, and shop some more, and do some baking, and get some treats made for the boy’s school Christmas party, because I apparently lack good, quality organizational skills.

Tonight, while we were driving in the Suburban, I sighed and told Hubs, “I think I need a wife. Yes, I definitely need to get myself a wife, because I have so much to do, and a wife would really help me out about now.”

Without missing a beat, Hubs emphatically declared, “You can have MY wife! She’s been nagging me about her broken computer too much lately, and she won’t let me watch my Avalanche games in peace.”

4. Guess what you can buy out of the Garnett Hill catalog?

Hello, 1979! I only wish you came in powder blue, with a big rainbow splashed across the sides, because that is the pair that made my heart sing with gladness! 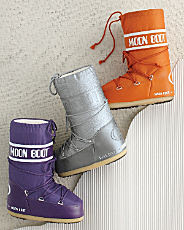 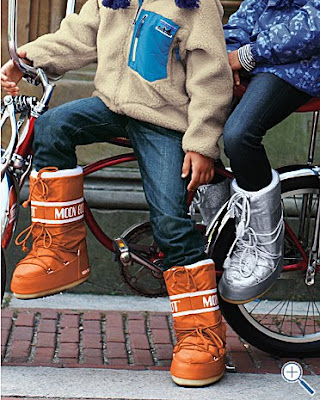 Yep. Those are genuine MOON BOOTS! And I love them. And I wanted to order a pair for the boy, so that I could go all nostalgic on him and say, “Now you have boots like Mama had when she was your age. Why don’t you wear them around the house and listen to some old Carly Simon songs?”

$140 for a pair of nostalgic boots that don’t even come in powder blue with rainbows emblazoned on their sides!

5. Hubs and I finally watched last week’s episode of The Office, where the Dunder Mifflin staff has their annual Christmas party, and I actually laughed out loud. Multiple times. Multiple times times six!

“Nobody hug me! I’m covered in tree sap!”

“My ‘brid…my hybrid…my Prius hybrid won’t fit a tree, which is ironic, considering how many trees it saves.”

“Yes, I have a wig for every single person in the office. You never know when you’re going to have to bear a passable resemblance to someone.”

“The name is Bond. Santa Bond. I’ll have an eggnog. Shaken, not stirred.”

“How about icing it? LOL. Dwight.”

“I’ve been trying to get on jury duty every single year since I was eighteen years old. To get to sit in an air conditioned room, downtown, judging people while my lunch was paid for? That is the life!”

“In the end, the greatest snowball isn’t a snowball at all. It’s fear. Merry Christmas.”

6. Happy Wednesday night, y’all. I have a ten-year-old who needs to be ripped away from DVR-ed episodes of Pawn Stars and stuffed into bed.