Skip to primary content
So last night, just as I was finishing typing up the annual Christmas letter (which is, predictably enough, long-winded and filled to the brim with grammatical faux pas that would make the best English professor grit his teeth in frustration and search in earnest for a hoped-for bottle of Wild Turkey that he used to keep in the back of his bottommost desk drawer, for just such occasions), Old Bessie (our slow computer, which is more than ready to be retired to the pasture for an elderly life of leisure) froze up.

I blame the weather. The ice and all. Old Bessie’s arthritic hard drive just couldn’t take it, and she got stuck.

And therein caused my panic, because THE CHRISTMAS LETTER! IT WAS DONE! And Old Bessie decided to save the letter, without even asking me, and she converted all the text to ancient hieroglyphics, the likes of which have only been seen in the underground core of Neptune. (This particular series of hieroglyphs? Well, the only documented copy is stored in Area 51, so my chances of deciphering it, without one of those all-access clearance badges, was zilch.)

I may have gasped slightly, as I felt a head rush coming on, and then BING! Old Bessie just shut herself down for a little nap, as she tucked herself in with the electric blanket and said good-night to everyone, regardless of the fact that no one had told her it was bedtime.

Poor Hubs. He was slumped sideways in his recliner, knee-deep in a televised hockey game, when I issued out some garbled form of a female distress cry and announced in a rather loud, completely UN-indoor voice, that Old Bessie had just flashed me the blue screen of utter death and THE CHRISTMAS LETTER! WAS GONE! WAS CODED! WAS INCINERATED DEBRIS!

And he got out his stethoscope.

An hour later, I still hadn’t convinced myself that I had enough stamina to actually rewrite the Jedi Family Christmas letter, so I called Hubs, asking for any word on Old Bessie.

Hubs replied by saying, “I had to hit her with the paddles a couple of times when she flatlined, but I think we’ve got a steady pulse now. Your C Drive is fried; Old Bessie smoked that one up good and proper.”

“Your C Drive, honey. Where things are stored. What this means to you is that you have permanently, forever and ever, lost a Chris LeDoux music file that was apparently on the C Drive, but everything else that I had stored there was stuff we didn’t need. The D Drive, which is the heart and lungs and brain stem and spleen and appendix and colon of Old Bessie, is still intact. She has regurgitated the Christmas Letter. And yes, I even managed to decipher the squiggles and boxes she converted your text into.”

Hubs. We like to call him the Miracle Worker.

Old Bessie came back home about 10:30 last night, and she was given an IV bag filled with Windows XP, and today she seems to be running exactly the same as she did before her near-death experience last night, but she gave us the proof that Hubs and I needed to assure ourselves that the pickle jar which we’ve been throwing sporadic heaps of silver coins into is about to be traded in on a younger computer model. A brand-spanking new computer model. It is time, people. Old Bessie has reached an elderly state, and her retirement is completely necessary.

And the Christmas letter? Oh, people. It was preserved. In English.

With all of that trauma completely behind us, I got up this morning and took the boy to school.

And then I went to Starbucks, where I quite accidentally ran into my good friends, Becki and Brandy, who were loitering around in front of the pastry case. We yammered on and on, chatting like only girls can do, when they suddenly burst out and said, “Listen! We’re both playing hookey today, and we’re going to Bigger Town to do some Christmas shopping, because we’re both far, far behind. Come with us, Mama! Come! Get your cup to go, and crawl into the SUV with us!”

Sometimes, self-restraint is so difficult. And sometimes my job gets in the way of my social life. I told them that I probably shouldn’t call in a sub for my PE classes at such a late minute.

But then I thought to myself, “But I could! I know Miss Donna would sub for me in a heartbeat.”

And then I thought to myself, “But it’s totally wrong!”

And then I thought to myself, “But I need to do some Christmas shopping, in a bad way! And it’s Becki and Brandy! And I love them! And they are so much fun!”

And then I thought to myself, “But it’s wrong. And I’ll miss little L’s Christmas program.”

And through it all, Becki and Brandy kept whispering, “Come with us! You know you want to! It’ll be a Girls Day Out! Get in the car! Call Hubs from the road and tell him we’ve kidnapped you!”

In the end, I didn’t go. Sometimes being a responsible adult is such a big bag of UN-FUNNESS. Had this been 1992, during my college days, I wouldn’t have thought twice about going. I would have had my cup of java juice and been in the car before Becki and Brandy had finished their sentence. I would have offered to drive the old Honda Accord. It would have been a glorious day.

Instead, I stuck to the day’s original game plan.

I drove out to Sister’s daughter’s school, so that I could watch little L’s Christmas program, which was, expectedly, darling.

There’s Miss L, in the gray dress. With the headband. And the red eyes. I contemplated fixing her red eyes in Photo Shop, but, people! EVERYONE HAS RED EYES IN THEIR CHRISTMAS PROGRAM PICTURES! I had red eyes in every picture my mother ever snapped (with her little instamatic camera with the stack of flashcubes stuck on the top of it) during every Christmas program I ever participated in. Everyone did. Miss L isn’t getting off that easily. 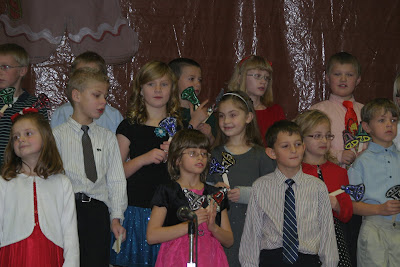 My nephew, five-year-old K, was very well-behaved during the program. He sat quietly. He listened. And then, in the last few minutes, he became a little restless, but so was I. My tailbone had gone numb on the metal folding chair. My legs were fidgety. So I entertained K by taking pictures of him, while he made sappy, crazy faces, and then I’d show them to him on the back of the camera. Every face he made was a challenge to outdo the previous face, as far as goofiness went. He was thoroughly entertained. 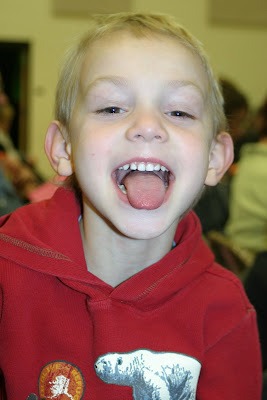 When the program finished up and my tailbone regained some feeling, I went to the stinky pet store to buy some crickets for the boy’s frogs, because WE PLUM FORGOT THEM ON SATURDAY! And Small Town’s pet store is closed on Sundays AND Mondays, so if you forget your crickets on Saturdays, your frogs are forced to diet for a couple of days.

Which, of course, made Gru and Yoda Joe a little grumbly.

So I bought them each an EXTRA cricket — a dessert, if you will! — and, against my better judgement and my moral motto in which I claim that I never feed live things to live things, I came home to dump those bugs into the frogs’ tanks.

And Gru’s new tank lid? Well, I dropped it on him so hard, I knocked him plum off his rock.

Yep. The lid hit Gru in the back, flipped him off the rock, and he landed upside down in his water, where he laid for a second or two, completely stunned, while little cartoon stars circled his head. After he flipped himself over and patted himself down to make sure all of his appendages were still there, he scampered off to hide in the faux foliage, while I felt some serious guilt and shame. I even texted Hubs and said, “I think I may have just crushed some of Gru’s internal organs! I think he’s hurt!”

Thankfully, the little frog rallied. He ate his crickets, and he glared at me for nearly knocking him unconscious, which I could live with. What I would have found RATHER DIFFICULT to live with would have been killing the boy’s pet.

Which I totally didn’t do!

After assuring myself that Gru was going to pull through as well as Old Bessie had the night before, I set off to teach PE, while I envisioned Becki and Brandy in the mall in Bigger Town, having fun.

And eating at the Red Lobster.

And PE today was every teacher’s dream. We’re three days away from Christmas break. We’re eleven days away from Santa’s arrival. Sugar plums and iPods and Transformers are dancing in the kids’ heads, and they are! out! of! control!

So we just played dodgeball, because low! I knew that I wasn’t going to get anything else out of them. We threw balls at one another, and we had a good time, and one of my kindergartners came up to me and said, “I asked Santa Claus to bring me a real hang glider, and my mom and dad told me that he wouldn’t. Do you think he will?”

And I wanted to shut down, just like Old Bessie had done, because I didn’t want to announce the obvious, which was, “No. I know your parents, and I know them well. And, honey, I’m pretty sure that they’ve already talked to Santa Claus and told him, NO REAL HANG GLIDERS FOR SIX YEAR OLDS.”