This was the scene at our house after school today. 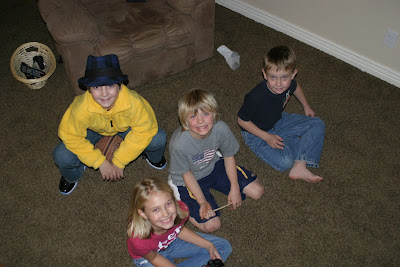 Yep. It was the boy, and the cute neighbor kid, and Kellen and G.

They were all hanging out at our house, eating our apples and playing a Harry Potter video game, which is only a one-person game for the PlayStation. You might ask how four kids play a video game with only one player, and the answer is simple: They set the timer for 10 minute shifts, and, when the timer beeps, they all shout out, “It’s my turn!” and “Just let me finish this one part!” and “No! No! You already HAD your 10 minutes!” and “Give me the controls now!” They shout all of this out at once, of course.

And eventually someone wanders upstairs after an hour and a half of game time and says, “I haven’t even had a turn yet. Those boys keep hogging it, and they won’t let me play.”

Poor G. The lone girl. I took pity on her and yelled down the stairs at the three boys, “You guys need to let G play!” And they mumbled and grumbled, and someone yelled back up at me, “She HAS played!”

And do you know what? I took this picture MOMENTS after the video game was fired up. Literally…the kids had only been playing for a couple of minutes before I caught their afternoon of fun on the digital camera. The apples hadn’t even been hauled out yet for snacks.

And I would just like to present to the courts what I only just now noticed.

Who is holding the lone controller for the game? You can just barely see it, at the bottom of the photo, because it’s almost (but not quite!) cut off. I’d like to submit this photo as Exhibit A. I’d like it to go on the record.

I think I should have been an attorney, as clearly I have an eagle’s eye for spotting things.