Skip to primary content
Remember our family ties to royalty on Halloween? 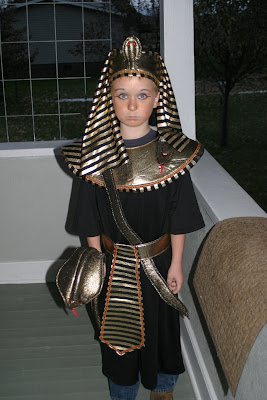 That’s right. Our boy was a non-smiling, cowboy-boot-wearing King Tut, because he was afraid his toes would freeze if he wore his sandals and completed the costume. The real King Tut didn’t know how good he had it — sand, sand, sand. He had no leaves to rake, because his pyramid was in the middle of a rather large stretch of sand, and his toes wouldn’t suffer from frostbite in October, because Egypt seldom experienced the cold snaps like we do out here on the frozen tundra. Plus, you know…gold! Lots of gold! That’s a perk, which every king seems to cherish.
At any rate, Hubs and I had access to the throne’s ear all weekend, and it was grand to be THATCLOSE to the reigning monarch.
On Friday morning, after King Tut had donned his royal garb and was parading around the house before school, scaring the domesticated fur babies (the cats) with the presence of his enormous headdress and cobra-topped staff, I called out to him, “You need to go make your bed.” (Because really, all kings need a little reminding about chores from their mamas.)
Without even batting an eyelash at me, the boy pounded his staff twice upon the hardwood floor and announced, in a booming voice that echoed off the walls of our home, “Do not tell the king what to do!! The king will only make his bed if he feels like making his bed!!”
This proclamation stopped Hubs and I in our own routine of morning tasks, and we both gave THE LOOK to King Tut. It was the look that said, without any verbal announcement at all, “You may have stepped too far into the puddle of trouble, Small One.”
King Tut gave us a blue-eyed stare back, and then quickly said, “I think that the king would like to make his bed. I even think that the king would actually like to make his bed right now.” And he turned on his booted heel (because sandals expose too much footage to the chilly elements this time of year), and marched himself right back into his bedroom, where he made his bed.