This morning the boy slept in until 7:00, which is saying something. In fact, it was nothing short of a Christmas miracle. Usually, he only sleeps in on school mornings. On mornings when he does NOT have to wear a shirt that matches his pants and comb his hair and head off to a classroom with 17 other kiddos, he likes to get up before the fellow who makes the donuts at the bakery. Before the proverbial rooster crows. In other words, if it’s a vacation day, the boy refuses to waste a single moment of it, and he gets up at dark-thirty.

But today? Hallelujah! 6:59, and the boy was still snoozing. 7:02, and he jumped out of bed, donned his bathrobe, filled his new CamelBak hydration pack with water, strapped it to his back, and launched himself full force into the one-man construction crew for the Death Star.

He continued to build and shoo the cats out of his bedroom (they were whole-heartedly determined to run off with a Lego piece, and the boy was staging an all-out war on them) until 1:00 this afternoon, at which time he decided to go ice skating with his buddies.

The three of them were a vision, let me assure you, racing around the rink and complaining about their helmets, which their mamas shoved upon their heads and declared, “Do! Not! Take! The helmets! Off!” The boy discovered today that he has completely outgrown his little yellow hockey helmet — the cool helmet. He also realized that he’d outgrown his ice skates, too. (Clearly, the boy hasn’t gone skating since LAST winter.) Although he was definitely excited to be getting bigger, he was not excited about having to rent what he considered to be an ugly helmet from the rink, and he complained that he looked like a dork.

I wanted to say, “Honey, you look fine. On Sunday, when you wore your bathrobe over your dress clothes on the way to church...you looked like a dork. Really, you did. And this summer, when you insisted on wearing your snow boots, in August, with your Under Armour shorts to Wal-Mart, and I caved and let you, because I didn’t have the energy to fight it, you looked like a real dork. But today, you look incredibly cool.” However, I bit my tongue and simply insisted that he looked fine, which of course he did. (He’s a handsome little fellow!)

The boy wasn’t buying any of his mother’s reassurances. He thought the helmet was ugly, and he didn’t want to wear it, but the alternative involved a ride in the Suburban back home, without having made any circles around the ice rink. Our budget does not currently have any extra dollar bills assigned to emergency room visits for concussions sustained on the ice.

He knew when he’d been beaten. 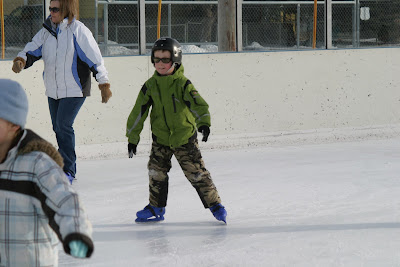 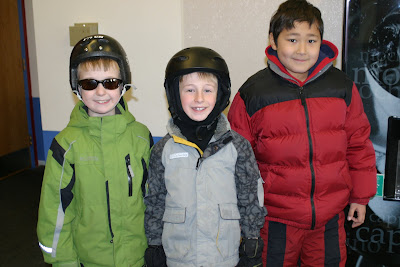 You can easily recognize the boy in this photo. He’s the one in the green coat and the dorky looking helmet.
After they’d skated until their little legs were exhausted, the three boys ended up at our house, where they spent the rest of the afternoon rotting their brains out with non-stop video game action. For Christmas, the boy got a bright orange shotgun for the Wii. The game that goes with the bright orange shotgun is one in which you shoot pesky chickens on the farm, while the chickens throw eggs at you. (Only in our neck of the woods would you find this game funny. I’m sure there is a PETA member somewhere who will file a complaint with Nintendo for this one.) Naturally, this game was a huge hit, and the boys laughed until their sides hurt. And then they played Hubs’ hockey game, and I was surprised to hear that all three of them knew the words to “Back in Black” when it was played in the virtual Pepsi Center, when the virtual Colorado Avalanche took the virtual ice in the Play Station 3 game.
Serious problems there, let me tell you. Shouldn’t they all still be singing songs from the Veggie Tales soundtracks? When did they become old enough to sing “Back in Black” from memory? And when did they become old enough to think that they looked like a dork in a generic hockey helmet? And why do their feet have to outgrow their cute little ice skates?
Why do they have to grow up so quickly?