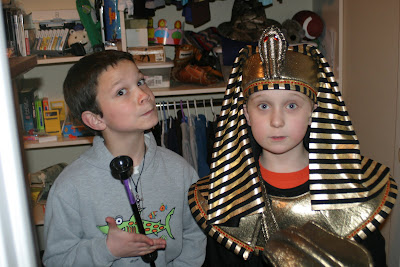 There are those out there who insist that laying down the amount of George Washingtons that we do for Halloween costumes is something that resembles sinning. Since I have the sewing skills of a porcupine and the creativity of an amoebae, I purchase every Halloween costume that the boy wears. No exceptions. I am that girl — the one who stapled the hem on a skirt in college once, because my mama (who sews) was many hundreds of miles away.

At our house, though, we like to refer to Halloween costumes as lifetime investments — hence, a hefty price tag doesn’t scare us.

May I submit the above photograph as Exhibit A? You have no way of knowing this, except by taking my word on it, but this picture was taken this week. This week, people. And the date was much, much closer to Groundhog’s Day than it was to October 31st.

Ben and the boy were decked out in their royal garb, and they had been outside, shooting the deer with the paintball dart gun. It keeps them entertained for hours, and watching a monarch blow paintballs at mule deer is almost as fun as being at the carnival.

I’m sure that Uncle Ted would give his whole-hearted approval.

1 thought on “The Winter Reign”