I may have mentioned that the boy is on Spring Break. (The capital letters indicate that Spring Break is a holiday. Like Christmas. Only without the presents, and all the cookie baking, and the crazy shopping.)

We’ve tried to create some memories of this Spring Break that will last the boy for a long, long, long time, so that when he’s ten, he can look back fondly on this week and ask, “What did we do last year for Spring Break? Anything?”

And I will remind him about having Ben and Enzo here to sleep over, and how no one would ever go to bed at 8:00 like I wanted them to, but instead they all managed to keep me awake until the unholy hour of 11:30 PM (both times), and how we hauled the boy up the side of the mountain, so that he could make memories by sliding down the very steep hill on a piece of plastic, and how we went to the movie theater a couple of times over Spring Break Week, and how I let him eat lots of pizza with his friends, and how he even managed to get sneaky on me and eat almost an entire package of Girl Scout Thin Mints with Ben, and I won’t even mention the one simple fact that Mama survived Spring Break ’10 without a single cup of deliciousness from Starbucks, because Spring Break hit before Lent was over.

Five days from now, I will be placing an order at Starbucks. In case anyone was wondering.

In the spirit of Spring Break Week, we kept the fun rolling today by making the drive out to see my dear friend, Peggy. Peggy has some extra land surrounding her house, because she lives in the country. And because she has this extra land, she has some chickens. And some ducks. And a mighty fine dog. This last week, though, Peggy has adopted three very teeny-tiny chicks, and three baby ducks, so she invited the boy and his good buddy, Enzo (who slept on my family room floor last night and brushed his teeth in my sink this morning), out to hold them. The boys didn’t need to be asked twice if they wanted to cuddle baby birds. They were fired up and ready to set out.

The boy went on to ask me about eighteen times today why we couldn’t have baby chicks and ducklings at our house, and I tried to explain to him the policy which the city sort of enforces about not having farm animals in town. The boy emphatically announced that this is probably the dumbest rule established by adults that he’s ever heard of, because what if city-dwelling boys (like himself) would like to have a duckling or a calf or a piglet as a pet? What then?

I’ve never been more thankful for a city code before today, because I could just shrug my shoulders and say, “I’m sorry, honey; I didn’t make the rule.” So no baby farm animals at our house. Ever. I wish that deer were classified as farm animals and could be removed by city officials to bigger pastures in the country, because I am tired of them nibbling on my trees and downright swallowing my rosebushes whole.

And I should announce, right here, that Goldie, the roommate to Spot, the Goldfish Racing Sensation, went to be with Jesus bright and early this morning. We had some definite tears at our house. We had some questions. (“Why, Mom? Why? He was such a good goldfish, and Goldie never did anything to anyone!”)

And after that — after having to fish Goldie out of his little bowl and bury him at sea, via the potty — the boy and Enzo decided to wipe away their tears and make themselves breakfast. They were all set to make French toast, by themselves, until they realized that we were completely out of vanilla extract, and then they wanted to know what kind of mom lets her pantry run out of vanilla extract? One who tries to fill Spring Break Week with fun memories, and who cannot remember to put vanilla extract on the shopping list, that’s who. There were more tears on the boy’s part, what with just having flushed his week-old pet and now suddenly facing a morning without French toast, because…hello! No vanilla extract! Believe me, I was overwhelmed with relief when Peggy called and suggested that we just amble right on out to her house and hold some feathery babies.

We did just that, and I took the boys through the McDonald’s drive-thru for breakfast. Enzo emphatically said, “This is so cool! I’ve never even been to McDonald’s for breakfast before!” And frankly, we at the Jedi House never go out for breakfast, either, so the menu was a complete surprise to all of us. We had no idea what to order off of it. My friend, Susan, has been going on and on for the last two weeks about how wonderful the new caramel frappes served at the Golden Arches are, so I tried one. Rest assured, I won’t be doing that again! Thank you for nothing, Susan! The frappe was disgusting! Hubs ended up drinking it, and he adored it. Of course, he actually likes coffee, which I do not, so this may have been the reason, since the frappe is a blended coffee concoction.

Peggy’s house is so warm and inviting and comfortable and cozy, and the chicks and the ducklings were so huggable and stinking cute, we ended up staying for quite a spell of time. She even made us lunch, which was a treat, because…hello! Frozen pizzas! The boy and I actually love frozen pizzas, but Hubs refuses to touch them. He claims that they’re one step above mushrooms, and Hubs is rather dramatic in his gagging over the fungi. Peggy claimed that her husband won’t eat the frozen pizzas, either; in fact, she claimed that he calls them “crackers covered in ketchup and cheese.” This about sums up how Hubs feels about them, too. No matter. The boy and I can do some damage to frozen pizzas, so it was a treat to eat some with Peggy and her baby birds.

And then Peggy made the mistake of handing a nearly-full bag of potato chips to the boy and Enzo. It was a nearly-empty bag, when I finally took it away from them, and her poor floor was littered in fragments of dehydrated potato pieces. Cue the mighty good dog, who is rather fond of food debris on the floor, and who was downright thankful to have two nine-year-old boys visiting during lunchtime.

The boys had a fabulous time cuddling the itty-bitty babies. They chased the mighty good dog, and she, in turn, chased them. And they got to search the hen house for eggs, and were quite excited when they found one, and, after we’d gotten back home, the boy said, “I was so excited to find that egg, I almost wish that Peggy had cooked it up for me!”

I’m not sure where the boy would have put it in his belly, what with having filled it to the brim with a bag of potato chips, three slices of frozen pizza, and all the M&Ms Peggy kept slipping him.

Even though Goldie has gone on to the Great Swimming Pool in the Sky, and Mama was out of vanilla extract, our day turned out to be wonderful. And now, Mam and Pa have invited the boy to sleep over at their house tonight, so the fun just continues. So far, Spring Break ’10 has been an endless streak of good times. While the boy is at Mam and Pa’s house for the evening, Hubs and I are having a cheap date. (Get it? Cheap? Cheap-cheap-cheap! Sort of like baby chicks might say? Only, you know, spelled differently?)

Our cheap date is at home tonight.

It involves a Netflix DVD and a cup of homemade chai tea. Because Starbucks is still off limits. 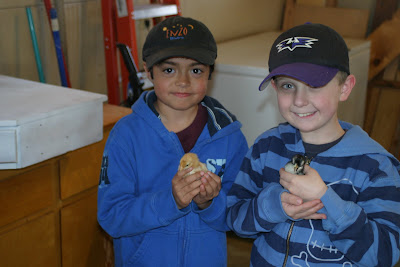 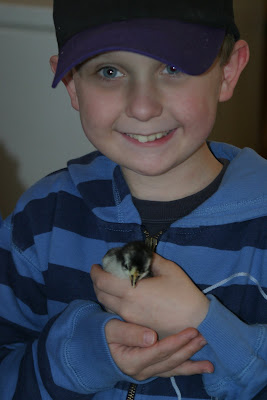 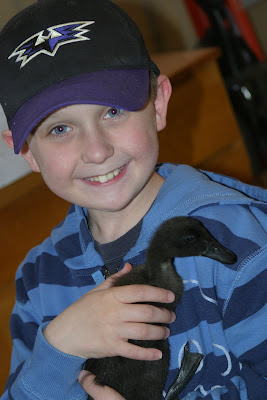