Blogger and I have been having some serious photo issues in the past few weeks. Blogger likes to rearrange my paragraphs every single time I insert a photo and push the bright orange “publish post” button. Blogger likes to alternate between squishing my paragraphs together, and putting eighteen empty lines between them. My Type A personality can’t handle it, and it makes me want to collapse on the sofa with a brown paper bag to breathe into. And then I want to call my mother and cry on her shoulder, only my mom would say, “Honey, there, there. I’m sure it’ll be fine, but I don’t know anything about blogging, so I can’t help you one whit.”

Last night, I told Hubs, “I may break up with Blogger. I may become Jedimama.com.” Goodness. I’d thrown out a verbal threat to Blogger.

Hubs replied, “Let me know how that works out for you.”

I asked, “You’ll help me, right? Because I basically know nothing about navigating my way around the cyber world, as well you know, and establishing a dot-com domain might take some more gray matter dedication than I currently possess. Or more gray matter than I’m actually willing to invest in this.”

Hubs said, “Nope. I don’t blog. And the less I know about blogging, the less energy I’ll have to expend helping other people with their blogs. It’s all a matter of physics. Which, by the way, I took in high school. And again in college. And you told the blogging world that I was only interested in shop class and PE, so now you’re on my list.”

“THE list. If we were ever in a head-to-head combat with tanks, I’m not sure I wouldn’t just, you know, push the button to fire.”

Don’t worry, people. Hubs doesn’t mean it at all. If he fired on my tank (which I wouldn’t be driving in the first place, by the way, unless it had a BMW label smacked on the front of it), he’d have to do his own laundry, and Hubs does not do laundry. Because of this one simple fact, I’m pretty sure I’m safe.

After striking out and gaining no sympathy from Hubs, I called my friend, Cody, and said, “Blogger and I are fighting. My Type A personality that loves the beauty of symmetry is dying a slow death of utter irritation over loading pictures.”

We’ll see how it works tonight. I’m not sure if I was supposed to twirl before clicking, or push before twirling, though.

…ohmylands! Is this not the very cutest picture? 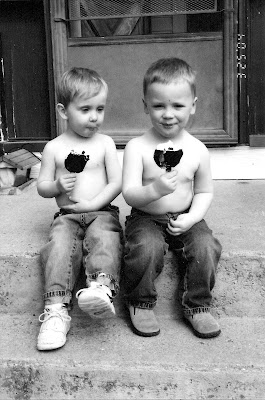 I found it yesterday, in a box. Yesterday while I was digging for the old pictures of me and Hubs. And, thanks to the technological advancement known as the scanner, I can put this picture in my blog.

This little picture makes my heart sing out loud with happiness!

Would you just look at those toddler bellies??!!

This is the boy (on the left), when he was three years old. He’s eating an ice cream bar next to his buddy, Gage. Gage was (and still is) an entire year plus two months younger than the boy is. He’s also about six inches taller and outweighs the boy by fifteen pounds or so, regardless of the fact that he was born fourteen months after the boy was. Gage has lumberjacks and football players and basketball players swimming in his gene pool. The boy, bless his heart, has Danny DeVito and the seven dwarfs, decked out in goggles and beach towels and with Zinc oxide on their noses, looking through the fence to see his gene pool.

And I’m still smiling from ear to ear over those little guts!

If a magic genie showed up today and gave me one wish, I think I’d wish to go back a few years, and snuggle that little three-year-old of mine just one more time. I love my nine-year-old boy to pieces. Oh, how I do!