Tonight we had the big, annual fundraiser at the boy’s school.

The boy didn’t win any money at bingo, but he won some really sweet prizes, straight from Oriental Trading Company, which he now cherishes greatly. That boy of ours can rock the school carnival booths.

Hubs spent the entire day making chili in the school kitchen, and he has the shirt to prove it. Indeed, Hubs’ T-shirt looks like the before pictures in a Tide advertisement. I am not convinced that this T-shirt is salvageable, even if I mixed up a little laundry cocktail consisting of Tide, Cheer and Gain. Shaken, not stirred. This shirt may officially be demoted to the status of work shirt from here on out.

I served chili with a pack of fun teachers for over an hour, and I didn’t get a single drop of it on my shirt. Girls are so much different than boys are.

One of the booths at the school carnival was the Face Painting Booth. We watched as kids emerged, all painted up. I think a good, solid guess would be that about 200 kiddos had their faces painted tonight, and the majority of those had two-tone faces, done up with their school colors. Orange on one side of the face. Blue on the other side of the face. (Hubs always claims, “I send my kid to this school, because his school colors match the Broncos!”) Lots of kids had soccer balls painted on their cheeks. Loads of little girls had butterflies done up in pretty colors on their foreheads. There were cheeks covered in flowers, tigers, and kittens. Lightning bolts, footballs, and aliens adorned all kinds of foreheads.

And then there was the boy.

My boy, to be exact. That boy I share with Hubs.

He went a different route when it was his turn to have his face painted.

Nothing cute or cuddly or sports-oriented for him. He sat down in the metal folding chair and happily announced, “Paint me up to be a skeleton, and I wouldn’t mind if you had some blood dripping and oozing off my head somewhere.”

Hubs and I are so proud of him. 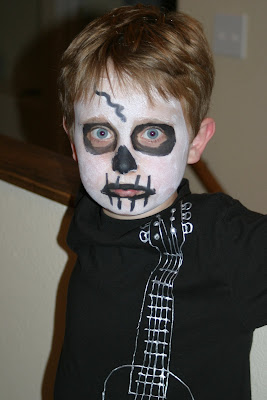 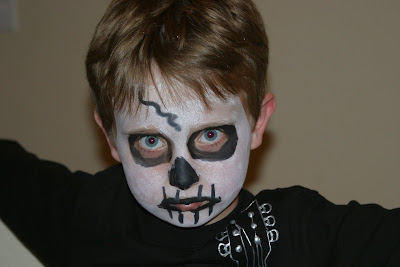