So last night’s icy mist? Which we played soccer in?

We woke up this morning to a full-on, raging spring blizzard. The kind of spring blizzard which caused school to be let out at 12:40 this afternoon. We call those days Manna Days. Yep. Snow days, like manna, simply fall from heaven, and you get to gather them up and hold them close.

I went to work at the church office this morning for a bit, where Susan and I avoided all contact with real work, and we spent our time taking pictures of the blizzard. Or rather, we took pictures of the pine trees laying over, almost touching the ground, in the raging blizzard. We were a team — I held the door open on the church building, and Susan stuck her camera lens through the small opening I allowed her to have (so as not to let the swirling snow and cold in with us!), and she snapped away. I dare say, we could have been a winning team of paparazzi.

Well, they’re still on Susan’s camera. Which is not at my house. So you’ll have to take my word for it. It was a crazy-nasty bit of a blizzard.

Eventually, Susan decided that we needed some love from Starbucks, so she ventured out in her mini van, in the blizzard. The blizzard with zero visibility. What she did is either called Sheer Bravery, Sheer Stupidity, or a Bad Addiction to Starbucks. She called me four minutes later and announced, amid hysterical laughter, “I’m off the road! My van spun and slid, and I’m stuck in a ditch, and I need pulled out! I’m just at the top of the hill.”

I told her, “Stay with your vehicle. Clear the snow away from the tailpipe. Melt some in a little cup on your dash, if you need to stay hydrated. And see if you have any piece of red cloth which you can hang out your window and use as a signal flag.”

Susan told me, “Um, yeah. You’re such a dork. Will you send Bob up here to pull me out?”

I simply whined, “Does this mean that you’re not going to Starbucks after all?”

Sadly, that’s exactly what it meant. Bob pulled Susan out, and our pastors closed the church down. I think the general consensus was, “If the schools are closing, so is First Baptist.” That’s what I like about the Baptist church! We don’t risk working in bad weather.

I threw the Suburban into four-wheel drive and made my way to the boy’s school, where I collected him and his buddy, G, and we trudged home in the wet and the slop. I think it goes without saying that the kids were powerfully excited to be home before 1:00 on a school day. They devoured all of the apples we had, as well as most of the artificially-flavored, orange-dyed crackers, which we should have taken to last night’s soccer game. The kids laughed. They giggled. They played some video games.

And then it was time to get our noses to the grindstones and do some homework. Because even Manna Days have their downfalls.

I spent the afternoon with a cup of homemade chai tea (since Susan never did make it to Starbucks), and a book. I figured that it was my turn to play Husband in the game of House! I could have done laundry or scrubbed toothpaste splatters off of a bathroom sink, but how often do Manna Days appear on our horizons? I didn’t want to waste it, which is exactly what Hubs would have done. He would have seen the gift that a genuine Manna Day was, and he would have crawled into his recliner with his good friend, ESPN. I simply did what Hubs would have done.

Minus the ESPN. And the recliner. But add the chai and the book.

And, on an entirely different note, I decided that I would try to get some pictures of the boy yesterday afternoon, so that I could play around with them in PhotoShop. I was sort of hoping for one of those precious shots, where the lighting is just right, and I sort of envisioned the boy smiling beautifully, and I would gasp when I saw the photo and exclaim, “Oh my! This is exquisite!”

I may have mentioned once or sixteen times that our boy is no longer interested in modeling for Ralph Lauren or me. He has made it his official life mission to make faces at my Canon.

And this first picture? Cute, isn’t it? I think it’s a clear indication that Hubs and I will be paying for our orthodontist’s beach house, completely by ourselves. 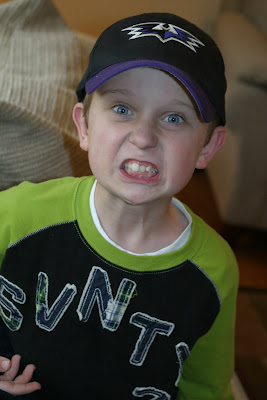 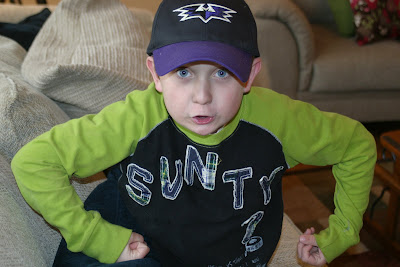