I actually know someone in Texas who writes a blog. She commented today, “Nuts! It’s already 90 degrees, and we’ve taken to setting up the fun sprinklers these days, so the kids can stay cool.”

We do not live in Texas. We live in Small Town, USA.

Today it was 40 degrees outside. The wind blew trampolines over. The boy wore multiple layers and a heavy coat to school.

And then we had soccer tonight.

And it rained. But it wasn’t the full-on, let’s-cancel-us-a-soccer-game sort of rain. Nope. It was the MIST-type of rain. It was sort of like being in the icy spray of a garden hose for an hour, with the wind blowing at our backs. All the right ingredients were there to cause a sure-thing breakdown and send mothers to the asylum. (I would’ve raised my hand to go to the asylum, just to get out of the rain. And the wind. And the coldness. And because I’m rather certain that someone else does the cooking for you there.)

It was loads of fun, believe me.

The things parents do for their children. Grandparents, though, have moved to the next level. They’re plenty old enough to say, “Heck, we’re not standing out in the icy mist with the parents. No, sir. We’re grandparents now, which means we can officially park the car right by the fence, and sit inside the Honda with the heater running, while we laugh at our children, who are getting quite wet, as they watch the boy play some serious mudball. Er…soccer.”

Way to go, Mam and Pa. If the boy had to rough it in the icy mist, then his parents were going to be right there with him, arguing on the sidelines about who would get the jet tub first when they got home.

Hubs won on that one. I came home to clean up the kitchen, fold a load of laundry, shove the boy through the shower, shove the boy into bed, and throw a blog post up on the World Wide Web. Hubs came home to have himself a hot tubby and warm up. He did not help clean up the kitchen. He did not help fold a load of laundry. He did, however, smooch the boy good-night.

Sometimes being the husband seems like it’s more fun than being the wife. We never learned that when we played House as kindergartners back in the…um…(gasp!)…’70s.

I’m also rather certain that Hubs actually never played Husband in the game of House when he was five. I’m going to bet that Hubs pretended to be the Crazy Neighbor Man when he played House, who was in the Navy and stormed beaches with an Uzi slung across his back. Somehow, I can’t picture Hubs, even as a five-year-old, rocking baby dolls and pretending to go to work.

Where was I? You know, before the tangent?

And they lost, 0 to 2, because the red and gold team were Thunder Sharks. And also? I think a couple of them were actually 7th graders, as they were about nineteen inches taller than the boy and Enzo are.

And then…THEN!…after the big loss tonight, the boys realized that, for the second game in a row, there were no post-game treats. They petitioned for new parents — for responsible parents. And then they mumbled something about keeping this in mind a few years from now, when we impose curfews on their sophomore selves. “Just you wait,” I think they said.

The boys were not happy about their loss. But mostly, they were unhappy about not having a Gatorade and a pack of bright-orange, artificially-dyed crackers to munch.

But do you know what they WERE happy about? The rain! And the mud! And the fact that they could disguise illegal slide tackles as accidents on the wet grass! And they were all really happy to just be together. They laughed together. They tackled one another before and after the game. They rubbed their wet mops and tried to create mohawks on themselves. Their Y chromosomes have never been more evident, as they simply cherished an hour to be together as friends, playing a soccer game in the icy mist. They were in the middle of the same hardship that we, as parents, were in. Yes, it was cold. Yes, it was wet. And our boys never once complained about any of that. Instead, they fully understood the blessing of just being together, right in the middle of the miserableness that was the weather, and they made a decision not to waste a single second of their time.

Our little pack of boys is pretty much golden.

And so many parents have vowed to bring snacks to the next game, I fear that we’ll have a veritable concession stand set up there on the sidelines. 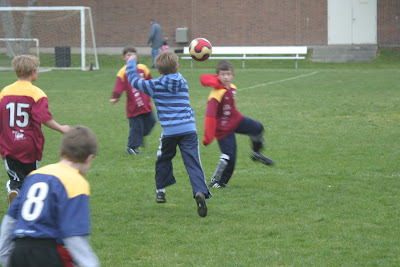 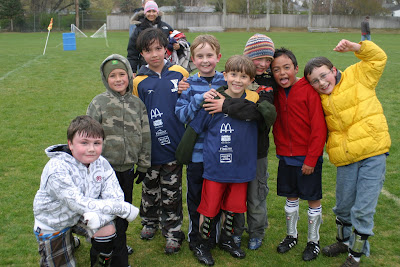