Today was Sister’s birthday. I might have mentioned that last night. I wanted to pull out the yearbooks, when Sister and Laura Ingalls went to school together, but I couldn’t find them. I’m guessing that they were lost during the Great Prairie Blizzard, which was so frightfully awful, Laura’s dad, Pa Ingalls, had to tie a rope around his waist so that he could find his way back home from the barn.

Oh, well. We had a little party at my house today, to celebrate the fact that Sister is another year closer to hearing aides, walkers, liver spots, saggy knee-high pantyhose, and hair that is so incredibly gray, it’s tinged with blue. And then, because Amy’s birthday was just two short weeks ago, when she deftly rolled into Older Age herself, I decided that the party could really be for both of them.

And Christy? Who also had a birthday today? Well, she had to work, and there was no getting out of it, so we just put on our big girl skirts and forged ahead without her at the party. Sometimes life just plain-out isn’t fair.

But really? I wish that I’d had just one more snapshot yesterday, when I posted pictures of Sister with cucumbers on her eyeballs and Christy gnawing on her cheek. After the blog post went up last night, my friend, Bev, emailed me a doozy of a picture and said, “Do you want one of Amy for the blog?”

And really? Oh, people. Of course I wanted one of Amy for my blog! Amy, you see, tends to be rather glamorous whenever she ventures out into public places, and she’d never be caught with cucumbers on her eyeballs, so it’s hard to capture a snapshot of her which can be used as future blackmail. Imagine my surprise when Bev said, “Look. Look at what I have!”

Of course it had to go up on the blog.

Amy, honey, that looks like some fabulous chocolate cake with miniature marshmallows on it. And, although I wish you had some produce slapped onto your eyeballs or a cheek shoved into your mouth, this will just have to do. 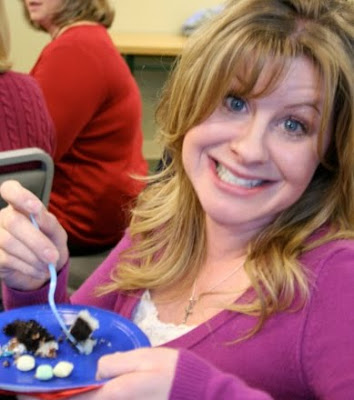 So yes. We had a party. And the birthday girls opened up gifts. Amy gave Sister a little bottle of goop for chapped thighs. It caused an enormous amount of giggles, because sometimes we are all just downright immature. 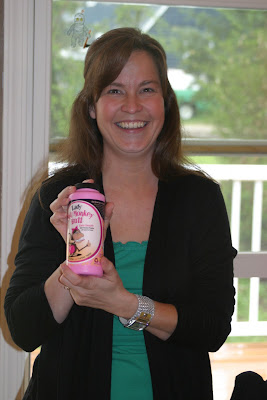 Sister gave Amy a new purse, because Amy is the Purse Queen. I am not thinking that this little number is going to hold the kitchen sink, which Amy is known to actually have in her daytime bags. In all honesty, it doesn’t matter what you ask Amy for. She’ll have it somewhere in her bag. She once even pulled out a ham sandwich and said, “Just in case.” I like how she’s always prepared for food emergencies. And another time? When we were enduring the world’s most boring show and I got a bit fidgety and couldn’t seem to sit still? Well, Amy pulled out a package of Starburst candies to keep me occupied. How on earth will she fit ham sandwiches and Starburst candies and hand sanitizer and lip gloss and hairbrushes and CDs into this tiny purse? 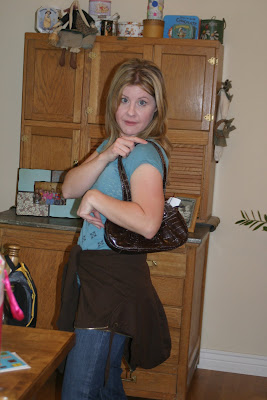 And then, because I was the party host, and because I had the camera, I made all the girls at this morning’s little Birthday Fest line up in front of my fireplace, so that I could snap their picture.

People, I honestly don’t know where I’d be without this batch of girls. Oh, there are a few darlings missing; of course there are. I wish that all of my girlfriends were included in one giant picture, but this is the best we could do this morning.

These girls (plus a few who couldn’t make the party this morning, for various reasons) are the wind beneath my wings. They’re the ones who’ll cry with me at sappy old movies. They’re the ones who understand me when I sob because I can’t make a decision regarding what color to paint my house. They bring brownies smothered in melted butter when I’m in the hospital. They have babysat my boy, fed me dinner, shoved glasses of wine into my hand, hugged me, laughed with me, and helped me clean my bathroom during Horrendously Dirty Grout Emergencies.

And yes, it was Sister’s party, but Sister, for the most part, shares all of my friends. Even though she is incredibly old, and she should be playing shuffleboard and bridge at the local retirement center, we let her hang out with us. 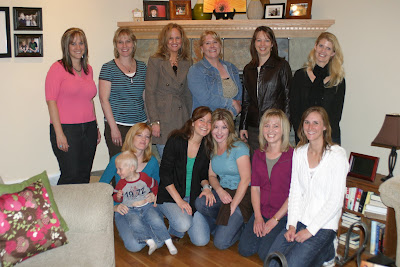 While the disco ball was spinning upstairs and we were all inhaling a plethora of lovely goodies, this is what was happening downstairs. TV time. I think that this little pack of darlings hauled out every toy that the boy owns (the boy was at school), and donned every article of dress-up clothing that we have stored at our house. And then we found Sesame Street on TV, and they were instantly mesmerized by Cookie Monster. 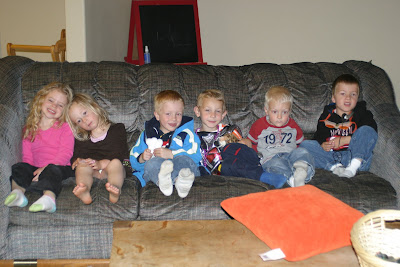 And, people, I made a torte for this morning’s party, which was a bit out of my comfort zone, what with it having far more than five ingredients and all. I was actually quite proud of the darned thing, what with me not being Sarah Lee or anything. I even took a snapshot of it with my cell phone, but God in all of His Glory is the only one who knows where my cell phone cord actually is right now. It’s the sole reason that I have very boring ring tones on my phone; it’s hard to actually get the cool ones, when you don’t know where the cable to your phone is, and I simply refuse to give up four trips to Starbucks in order to have enough money to purchase a new cable. I figure that I can live with boring ring tones, but four days’ of not having caffeine in an expensive cup is simply not an option. Hence, I have no snapshot of the torte to share with y’all tonight.

But the torte? Well, my parents took us all to dinner tonight (or rather, the immediate family to dinner, and not the enormous pack of girls and tiny preschoolers) to celebrate Sister’s advancing age, and we came back to my house for the remains of the torte afterwards. My dad said, “Wow. That’s really good. Who baked it?” I told him that I’d baked it, and he said, “Yeah? But who did you have bake it FOR you?”

Bake much? No. It’s my legacy. When I pull out all the stops and demolish my kitchen for one perfect Toffee Coffee Torte with eighteen different ingredients, people tend to think that it was done by a professional baker.

Which I am not.

But for Sister and Amy, I’ll step outside of my comfort zone.

I hope you girls are worth it.