First of all, we’ve had a lot of old snapshots on the blog this week, and I don’t see any reason to quit now.

Second of all, I need to tell you a story.

A long time ago, when I was bouncing around during my senior year of high school, and back when I was wearing white leather boots with fringe, which I loved to pair with my mint green jeans, which I laboriously rolled and pegged at the ankles, and then topped it all off with not one, but two! pastel-colored Lacoste polos with the collars flipped up, I met a girl. (That outfit, by the way? White hot! And the perm that went with it? I dare say, I could have graced the cover of Glamour magazine, but that would be bragging, and Jesus doesn’t like bragging.)

Anyway, this girl had just moved to Small Town, USA from Indiana. Indiana, people. She had an accent. And, although I thought that her accent was cute, some of her phrases were a wee bit different. You see, she was always fixin’ to do things.

As in, I’m fixin’ to head to the football game tonight, and I’m fixin’ to put some gas in my car. Clearly, this was an Indiana term, because no one in Small Town, USA used it. At all!

I had seen this girl around the school at the tail end of our junior year, and when our senior year opened up, she was in my vocabulary class. I had plenty of friends (Seriously, who wouldn’t have a plethora of friends, when she was decked out in the smokin’ hot ensemble that I just mentioned?), and I had enough people to sit with in my vocabulary class. I wasn’t fixin’ to sit with the new girl at all.

However, God had other plans in mind for us which would overcome my aloofness at not wanting to press forward and invite the new girl to join our little group, and by the end of the first week of our vocabulary class, our teacher had randomly paired us with a partner. In groups of two, we were to study our vocabulary words, and then we’d face another couple of high school seniors every other day in head-to-head combat in class to see which pair could memorize the most words.

Even back then, I had a gift for words, and I could memorize anything with lightning speed. (I know; this is bragging. Dang.) I was a bit worried that Miss Indiana was going to drag me down.

And do you know what? By the third day of being paired with Miss Indiana, we had cemented a fantastic friendship. And, I hang my head in shame when I say this, but she was even better at memorizing vocabulary words than I was. And she and I, as a pair, cleaned house with the vocabulary challenge. Our pair’s point total by the end of the second week was equal to the totals of every other group of seniors combined.

Oh, we had some brains between us, she and I. Brains and fantastic clothes!

And, of course, we giggled like crazy. And I loved her instantly. And she became my very best friend that year. And she had some really awesome pastel sweaters. And her perm looked even better than mine did.

Her name was (and basically still is!) Theresa.

A couple of weeks later, in the midst of an outrageous downpour of rain, our doorbell rang. My dad answered it, and I will never forget what he yelled up the stairs at me.

“There’s a Smurf here to see you!”

My dad always did have a way with words that would just warm a person’s heart.

The Smurf turned out to be Theresa, who had just finished cross-country practice, and she was wearing blue Spandex leggings (Oh, don’t laugh! Back then, Spandex leggings were a fashion statement!), underneath of blue running shorts, and it was all topped off with a blue sweatshirt from our high school, and Theresa had flipped the sweatshirt’s hood up, because of the rain.

Indeed. There really was a Smurf on our doorstep for me.

Theresa and I ended up braving the rain that night. We went out for a Coke, and she introduced me to a boy cross-country runner. Naturally, he was entirely wrong for me, but he and I dated anyway, and that’s another story.

But suffice it to say, Theresa and I had a friendship that was solid as concrete.

Eventually, we went on to college. Theresa and I lived together, and we gave up the mint-green jeans, and traded them for acid-washed jeans, and we quit wearing two polo shirts layered together, because it was no longer cool. But we kept the perms, because, back then, nothing spelled out Super Model like a good spiral permanent did. We both adored Tom Cruise movies (We’ve changed since then!). She single-handedly pulled me through college Biology our freshman year, because she completely understood meiosis and mitosis, and I simply did not. In return, I proofread all of her term papers. We had an open-door policy on our closets, and we wore the same sizes, and suddenly, we each had twice as many outfits to wear. We were a great pair.

Throughout the years, we have both gotten married. Theresa eloped, and she’s still madly in love with the guy, a hundred years later. I did the old-fashioned wedding, and Theresa was one of my bride’s maids. She had kids first (And, oh my! They are super cute kids!); I followed suit a couple of years later (And my kid is actually cuter than hers are!). Theresa no longer lives in Small Town, USA; she’s moved on, years ago, to Rival Town, USA. They have a camel for their high school mascot.

But I have forgiven her for living in Rival Town, and I still love her to pieces.

We have been friends for twenty-two years.

(Did I just say that out loud? Clearly, I meant that we met when we were in daycare together, when we were toddling around in our diapers, because there is no way that we were in high school twenty-two years ago.)

At any rate, today is Theresa’s birthday. Two day’s after Sister’s birthday. I would have included her in the little brunch party that I threw for Sister on Monday, but Rival Town, USA is a bit of a drive to attend a weekday brunch.

BY THE WAY, THERESA IS REALLY QUITE OLD TODAY!

And, of course, I have pictures to share with y’all.

This is Theresa in the kitchen of her first house with that fellow she eloped with. That fellow she is still quite crazy about. Check out her perm! And the curtains? Oh, Theresa! Did we really think that those were ever attractive? And the globe light above the sink? I think I just heard Martha Stewart shudder with horror. Oh, and Theresa, honey? Clean off the island! I also just noticed the purse on Theresa’s island. I had one exactly like it. In fact, maybe that one was mine! 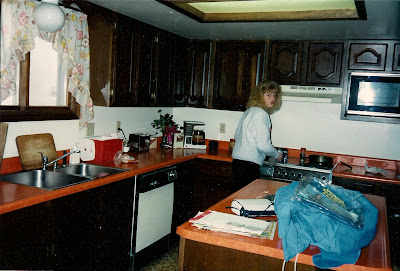 This next one is of Theresa in high school. She’s managed to stuff herself into a tube at the local playground. To save her a wee bit of embarrassment, I will sheepishly admit that I found a picture in the old cardboard box with this one of ME stuffed into this same playground contraption, but since it’s my blog and I control the subject matter, I’m not printing that picture. 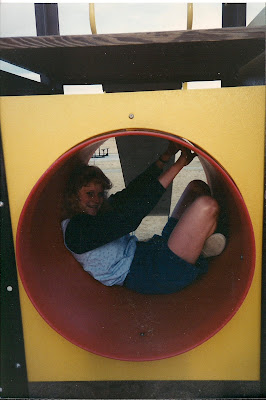 And this one? Well, we were all in college. Theresa’s on the far left, I’m in the middle (with the terrific hair clips), and our nutty friend, Stephanie, is on the end, using a pair of scissors as a microphone. I’m sure we were singing along to Def Leppard. Or Great White. And we must’ve been going somewhere, as we were primping and fluffing our perms, and spraying nineteen gallons of Aqua Net, which really held those hairstyles of yesteryear the very best. I rather like the big halo effect that the camera’s flash created in the giant mirror. The three of us did indeed have halos! (And Hubs, my halo really was this enormous! FYI.) 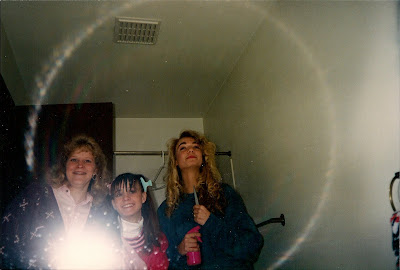 And this picture? Um. Yeah. The bangs were working well for ya, Theresa. Thank goodness those bangs went out of style years ago. But the very best thing about this snapshot is simply this: There’s a yellow, rotary dial phone in the background. Oh, Theresa! You are so old, honey! 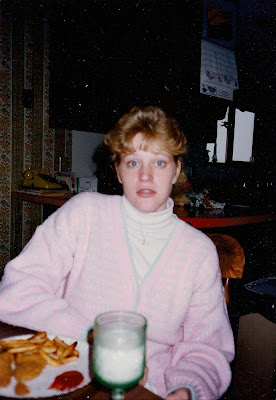 And then here’s a couple of babes! The scanner didn’t do a fabulous job on this snapshot, so Theresa’s skin looks a little ghostly. Clearly, she took the brunt of the flash for us. (Thank you, dear!) I’m pretty sure that this photo was snapped at our ten-year reunion. Our ten-year reunion from preschool. I know that you can’t really tell in this picture, but I had blue contacts in. My eyes are not blue. They’re brown. But for some reason, that was the year I decided to try blue eyes out, and I ended up hating them. Blue eyes are for Theresa and Hubs and the boy. I’ll take the brown ones, please. They feel a bit more natural. 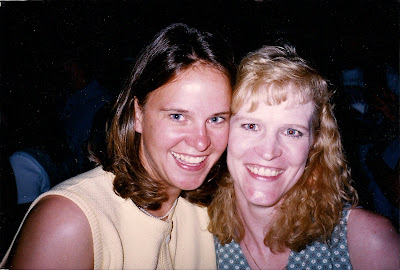 Happy birthday, Girlfriend. I’m fixin’ to call you in a minute myself.